Yesterdays BBQ was a great success and only one sausage was lost to the fiery pit of oblivion (i.e. down the side of the grill!). As far as I know so far no one has gone down with food poisoning as a direct result of my cooking! 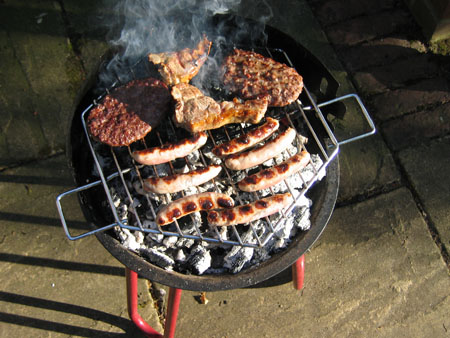 Now time for some tech news:

Yesterday saw the release of Mozilla Firefox 0.9 – the latest and greatest web browser. With it comes a host of new features include an extensions manager, a theme manager and a new visual theme to name but a few. To be honest I’m not sure about the new default theme but I think I’ll stick with it for a while and see if it grows on me. If you don’t like it you can always install the old one which to my mind is pretty qute (excuse the poor joke!). For a pretty good review of the new version check this out.

From what I’ve been hearing on the virtual grape-vine it sounds like a new release of my favourite Linux distribution is on its way. Slackware 10.0, as it will no doubt be called, is long overdue in my mind (the site hasn’t been updated since last September FGS) and if things continue as they have been it’ll knock the socks off everyone else – it just can’t be beaten for its speed, stability and rapid security update cycle. The last time the Norwich server was rebooted was when my Dad ‘accidentally’ turned off the UPS, aside from that it’s never crashed. Keep your eyes peeled for a release candidate sometime very soon.