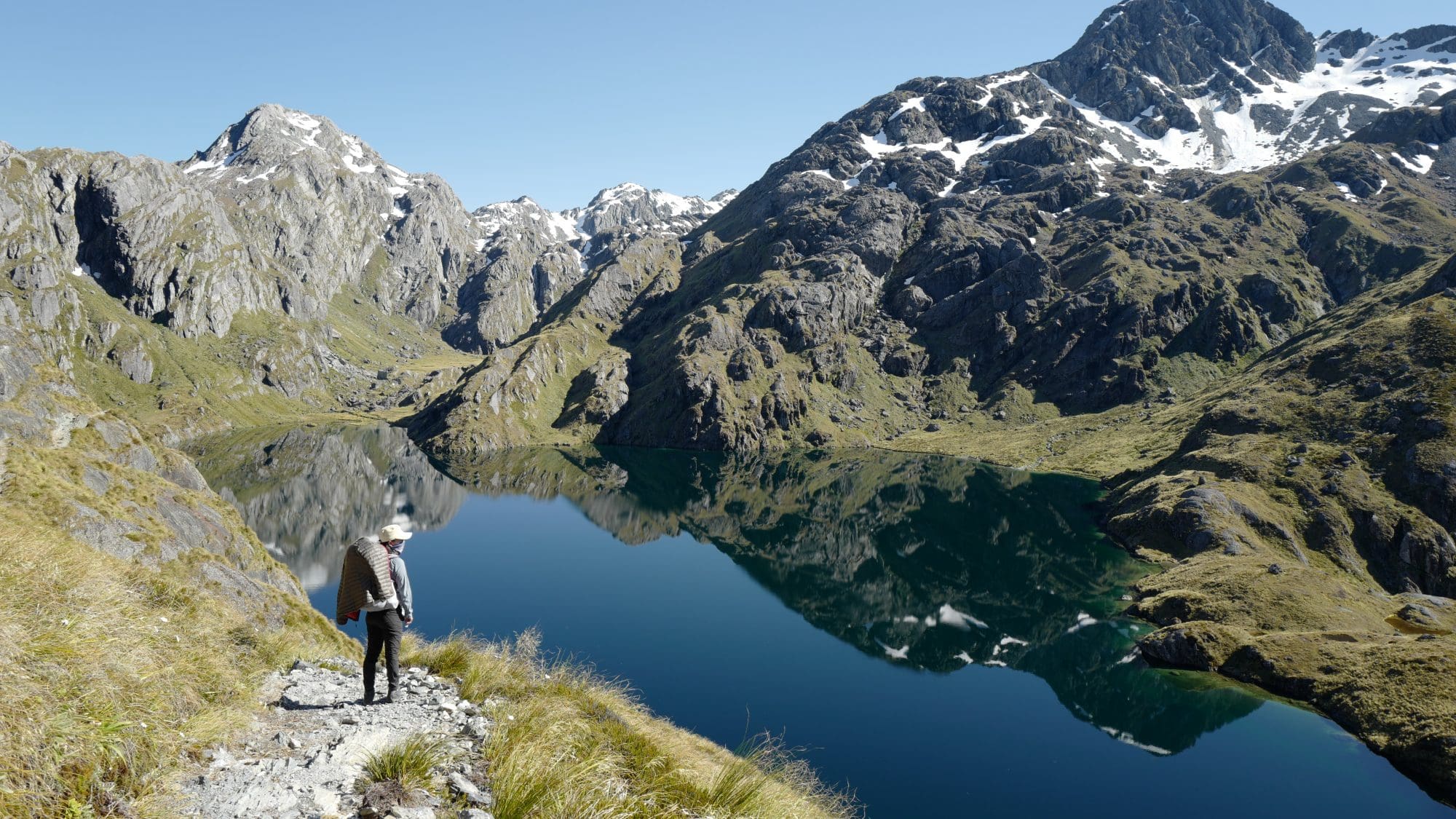 New Zealand is famed for its spectacular mountain landscapes, bought to the world’s attention by Peter Jackson’s Lord of the Rings trilogy. The Department of Conservation there has developed and maintains a series of “Great Walks” that pass through some of the best and most diverse scenery in the country.

Over the Christmas holidays last year we hiked the 32 km Routeburn Track, one of the Great Walks in the South Island, over 3 days. It was easily one of the most jaw-droppingly beautiful hikes we’d ever done.

The Routeburn Track was an important route for both indigenous Māori and European settlers. It used by Māori in search of precious pounamu (greenstone) which was used for tools, weapons and ornaments.

Envisioning a router for shipping gold, early Europeans started a bridle track to link the Routeburn Track with a settlement in Hollyford Valley in 1861. However, failure of the isolated settlement meant track construction ceased after just four years.

Our road trip thus far had taken us from Christchurch to Queenstown via some spectacular glacial mountain ranges.

We spent the final night before our hike in a rather nice hotel overlooking Lake Wakatipu, glad to be away from the downtown area which is overrun by thrill-seeking youngsters.

In the morning we drove up the east side of the lake, stopping frequently to admire the views. We reached Glenorchy at noon and were thankful to find a restaurant open for lunch on Christmas Eve.

After pottering about by the lakeside for a bit we jumped back in the car and drove the remaining 25 km 30 minutes up to the Routeburn Shelter. Most of this is a gravel track so having a 4×4 was very beneficial. Watch out for livestock on the road!

Beside the car park, there’s an unmanned visitors centre at the Routeburn Shelter with toilets and displays telling you about the trail.

In high we said goodbye to our friends, who would be taking the car and kindly picking us up from the other side, and crossed the swing bridge that marks the beginning of the Routeburn Track.

The track winds through a beautiful beech forest, sections of which are a remnant of the old bridle path built in the 1870s.

Climbing gently to Bridal Veil Stream, the track hugs the contours above the Routeburn gorge. The crystal-clear blue water of the stream below shone through the dense tree cover. We were tempted to take a dip but the water was ice-cold.

A third swing bridge takes you back across the Route Burn river to the first of many new landscapes to unfold on this journey; expansive open grassed flats with a stream meandering down the centre.

Shortly afterwards we turned right off the main trail to the Routeburn Flats Hut and camping area. Arriving around 6 pm, most of the other campers had already set up their tents but luckily due to the booking system we were guaranteed a spot.

Sitting in the soft grass beside a shallow stream, overlooking the mountains, it’s hard to overstate just what a tranquil and beautiful spot it was.

Before dark, a friendly warden came around to check our tickets and provide a few words of advice for the trail ahead. It was heartening to see things being so well managed to preserve the fragile ecosystem.

Note: most people would choose to stop overnight at Lake Mackenzie but this was fully booked so we had to do most of the distance on day 2. This is doable if you’re relatively fit, it’s just a very long day.

Knowing we had a long walk ahead, we woke early and ate our breakfast of porridge in our sleeping bags before venturing outside at 6 am.

Our eyes were greeted by the etherial sight of a blanket of mist covering the flats just above the surface. It was a good omen for the day ahead.

Walking through the gnarled beech forest back to the main path, the trail climbs steeply towards the Routeburn Falls Hut, crossing a couple of bridges on the way.

We paused at the hut to catch our breath and put on sunscreen. Looking back down the valley, we could see where we had camped the night before.

Above the Routeburn Falls Hut, a wide gorge has been cut by the outlet of Lake Harris which flows over and down into the valley below. The trail climbs up and around this before descending into the Harris Saddle which marked the next transition into what felt like a lost world enclosed by mountains on all sides.

With nary a living soul in sight, we walked in hushed revelry through the beautiful landscape. It was truly awe-inspiring and the photos barely do it justice.

Slowly we worked our way around to Lake Harris, the beautiful alpine lake which feeds the stream we had been walking parallel to most of the morning. Its perfectly still surface mirrored the snowcapped mountains above.

By now it was 10 am and we had reached the highest point of the Harris Saddle/Tarahaka (1,300 m). We sat on a rock nearby an emergency shelter with the lake on one side and Hollyford Valley on the other.

We polished off the apples we had bought with us, our only fresh fruit for the whole trip!

After passing the shelter, the path turns left and begins making descending slowly along the exposed Hollyford Valley face with stunning views in either direction.

Along the way, we passed many exotic alpine plants with fascinating intricate forms that I’d never seen before.

It Christmas day, a few people had gone the extra mile with a Santa and a couple of reindeer spotted on the trail!

At this point the traffic heading in the other direction picked up a little bit as we passed groups of walkers who who had set out in the morning from the huts ahead.

After a couple of hours more hiking, we eventually spied the turquoise waters of Lake Mackenzie from the end of the traverse.

Access to the lakeside is permitted by a series of zigzags down the mountainside, passing through bush where mosses, lichens, climbing vines, and other epiphytic plants hung from the tree anches.

As you can imagine, this would have been the perfect spot to stay the night had we had been able to book the hut or campsite here.

Nevertheless, the shore of the lake was the perfect place to relax and while away an hour while cooling our aching feet in the water.

Feeling somewhat recharged, we steeled ourselves for another long walk during the afternoon and set off from Lake Mackenzie Hut at around 2.45 pm.

The track climbs steeply before reaching the bushline. It then gradually descents past the ‘Orchard’, an open grassy area dotted with ribbonwood trees.

Shortly before 5 pm, we reached the majestic Earland Falls (174 m) whose shallow plunge pool is the perfect place for an outdoor shower. I took full advantage to rid myself of the days’ sweat and sunscreen.

The late afternoon light filtered through the trees illuminating the bright greens of the forest.

We made it to Lake Howden Hut around 7 pm and again were amongst the last to arrive. The warden gave a short talk about the history of the area and kindly handed out Christmas crackers!

Eating our rehydrated camping food we were slightly envious of those who had bought fresh meat and vegetables to cook on the gas burners in the hut though, on our compressed schedule, that wasn’t really realistic for us.

You’d have thought that we’d be tired enough to get a good nights sleep after the long walk but the shared sleeping quarters were hot and noisy. I would much rather have been in our tent.

In the morning we were up and out of the hut by 8.30 am. We were due to rendezvous with our friends at The Divide at noon and, given there was no phone signal anywhere in the region, we didn’t want to be late.

The track climbs steadily for about 15 minutes from where we took the turn-off to Key Summit, a ~1 hour detour which takes you to an alpine wetland with magnificent views of the Darran Mountains and the Hollyford valley.

During the last ice age, which ended about 14,000 years ago, a huge glacier flowed down the Hollyford Valley and overtopped Key Summit by 500 m, with ice branches splitting off into the Eglinton and Greenstone Valleys.

There were a few wispy clouds in the sky but not enough to block the extraordinary view of the glacial geography. In the photo above you can see Mt Christina on the left, Mount Crosscut behind Lake Marian in the centre of the image, and Mt Gunn on the right.

It was well worth the short detour to visit this unique environment and a real highlight at the end of our tramp (as they say in New Zealand).

It took us about another hour to hike down the well-graded track to The Divide where we arrived at 11.40 am, just in time to meet our friends 5 minutes later. From there we drove on to Milford Sound.

If the above is anything to go by, you can probably guess that I couldn’t recommend the Routeburn Track more highly. I hope we’ll have another chance to hike more Great Walks in the future.