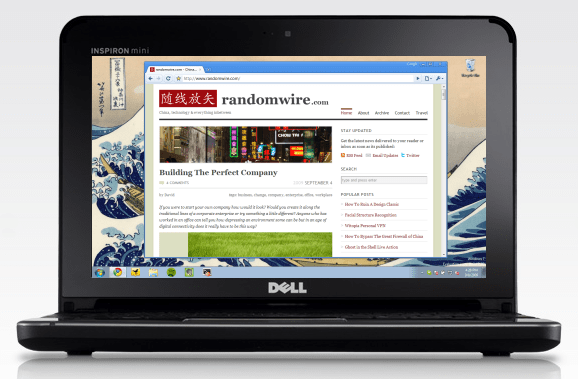 The main computer I use day-to-day is my trusty MacBook Pro 15″ but the problem I have with it is its weight which makes it impracticable for travelling with. I also have an iPhone which is great for quickly checking email or surfing a few sites but not very practical for writing anything of considerable length or downloading photos on the go. Because of this, I’ve just purchased a Dell Mini 10 netbook which I’ll primarily take with me while I’m travelling to stay in touch – at only 1.2kg it’s as light as a feather and perfect to slip in a backpack.

Aside from having a very sleek design one of the biggest selling points for me was the 10.1″ HD screen (1366 x 768) which is a lot higher resolution than most on other models giving a lot more screen real-estate for viewing web pages and the like. For such a small form factor it also has a comfortable keyboard (92% full size) and somehow manages to squeeze in 3 USB ports, HDMI output, and a 3-in-1 card reader (very handy for photographers).

Nearly all netbooks come pre-installed with Windows XP, which anyone can tell you is long past its best-before date. While I would have loved to install Max OS X (which can be hacked to run on some specific models) the Mini 10’s graphics chip doesn’t support it so I decided to install Windows 7 instead. This turned out to be quite a good choice and seems significantly snappier than its predecessor with an overall big improvement in the user experience.

As the Mini 10 doesn’t have a DVD drive I installed Windows 7 from a USB hard disk (see guide here for instructions). To keep things lean and mean I’ve tried to install as little as possible (and disable some unneeded services which could slow it down):

Once Google Chrome OS comes out (next year) I’ll most likely move over to that but until then this setup should do quite nicely as a general-purpose machine for on the road. I’ll be putting it through its paces on my trip to South Korea next week (more on this later) and will report back on any significant positives/negatives.