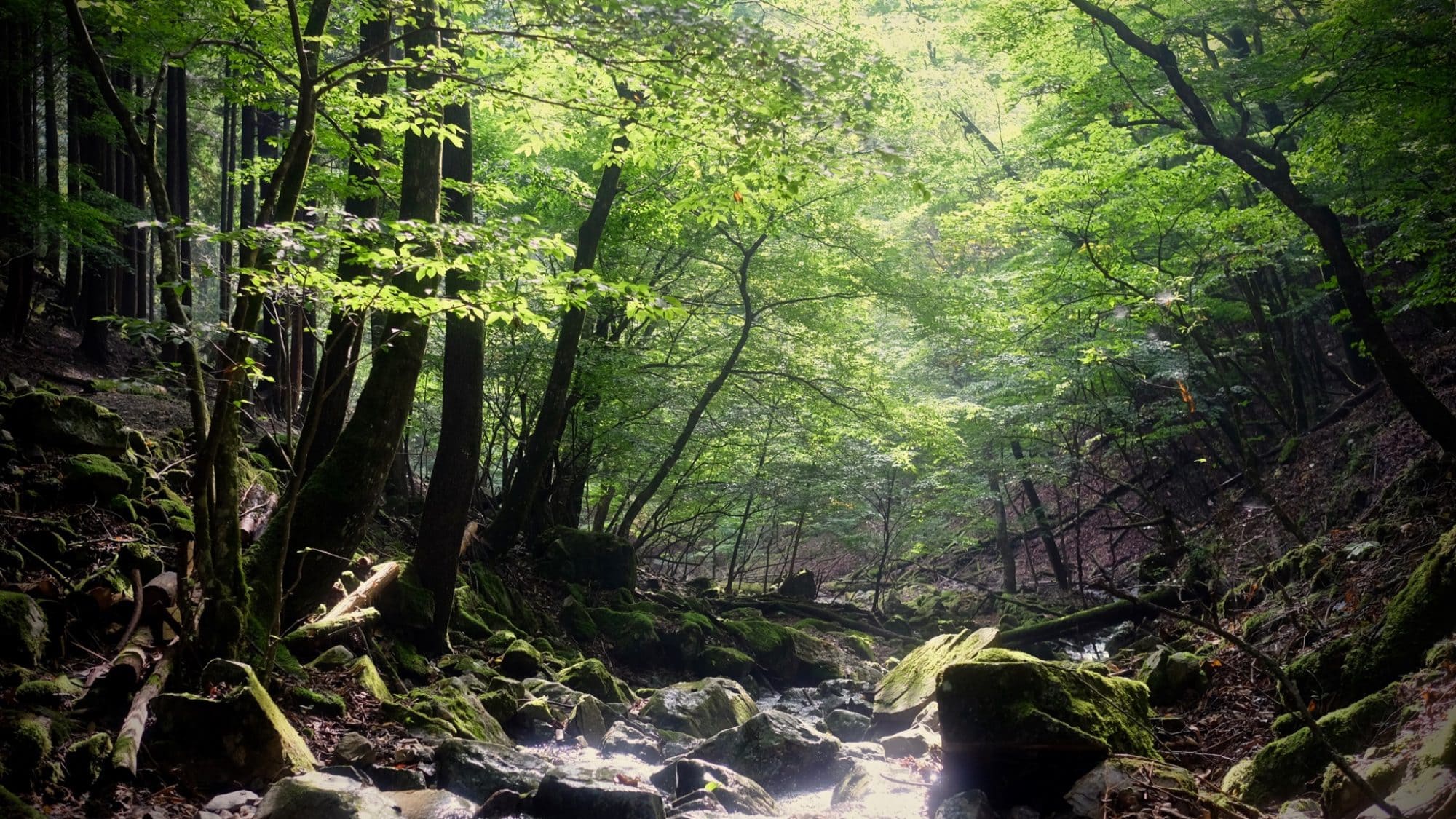 Quite by accident, summer 2015 turned into a series of camping trips, starting with my brief overnight stay at Freemont Peak where I caught the bug for it. After returning to Tokyo I resolved to undertake a multi-day adventure and started researching my options and the equipment I’d need.

After buying a lightweight tent and a few other essentials I decided to test things out with a short trip first. Using the excellent trail guides at Ridgeline Images I picked an overnight route to Mt. Daibosatsu (大菩薩嶺) in Yamanashi Prefecture, one of the 100 Famous Mountains of Japan.

The day began with a two-hour train and bus trip from Shinjuku → Enzan → Daibosatsu-toge trailhead (大菩薩峠登山口). The bus schedule isn’t very frequent so be sure to plan accordingly (Google Maps is your friend).

The only other people on the bus were a group of retirees who it turns out are the primary market for outdoor pursuits in Japan (the younger generations presumably being too busy working themselves to death).

I soon outpaced them and continued at a brisk pace towards Fukuchan-sansou (福ちゃん荘).

After stopping for a snack lunch at Fukuchan-sansou, a small mountain restaurant/shop, I took a 5-minute detour to Fujimi-sansou (富士見山荘), an abandoned hut which is supposed to have great views of Mt. Fuji but I wasn’t so lucky on that particular day.

Reaching the 2,056m peak of Mt. Daibosatsurei (大菩薩嶺), about an hour later, was rather uneventful since any views were obscured by thick fog which only provided a strange feeling of foreboding.

As I headed down towards Daibosatsu-toge (大菩薩峠) I was able to get a few glimpses of the lush valley below the mist.

Did I mention that 90% of Japan’s hikers are well-mannered pensioners?

Daibosatsu-toge is also famous from the novel The Sword of Doom by Kaizan Nakazato and a 1966 film of the same name.

From Kaizan-sanso it took about 40 minutes to reach Furukonba (フルコンバ) where I arrived around 4.30 pm and prepared to pitch my tent for the night.

Ridgeline Images had mentioned that it was notoriously hard to find the water hole but I wasn’t quite prepared for just how much of an ordeal it was going to be. From the photo above head downhill to the left and then wade directly into the scrub – keep going till you hear the sound of trickling water and then let your ears guide you. Make sure you collect enough water the first time because you’ll not want to do it twice!

Without a single soul around for miles, I felt a great sense of liberation (that and being secretly proud that I hadn’t got hopelessly lost).

After setting up camp I cooked a simple meal of rice (from Mont-bell) and chicken curry (from Muji) using my Stanley cook set followed by a hot chocolate.

Being a novice camper I had completely underestimated how cold it would get and so spent a sleepless night cursing myself while shivering in my tent and trying to distract myself by listening to podcasts. I got up with the first light at 5.30 am and after a breakfast of cold cereal packed up.

As soon as the sun began to warm up my dejected mood lifted and I was able to enjoy the trail as it snaked its way along the Tanba Daibosatsu-toge Bosatsudo (丹波大菩薩道).

It took about an hour to reach the next clearing at Nomedawa (ノーメダワ), with the only other living creatures I encountered being some wild deer who bolted as soon as they heard me coming.

The route passes a number of streams crossed by makeshift bridges. I collected water at one but was hesitant to drink it directly so took a break for another hot chocolate.

The final section of the trail along a gorge towards Tabayama village (丹波山村) was the most precarious with the path having been washed away in multiple places by typhoons making some parts almost unpassable.

Negotiating a steel bridge blocked by a fallen tree with a heavy backpack was fun!

Eventually reaching Tabayama village around 10 am I had almost two hours to kill till the next bus to Okutama Station so made my way down to the river’s edge and re-pitched my tent in order to let it dry in the mid-day sun while listening to the music wafting from a nearby local festival.

Despite the sleepless night, it was a great introductory hike which lifted my confidence for my next more ambitious adventure (coming soon). I’ve published the route I took on Yamareco for anyone who want to follow it.