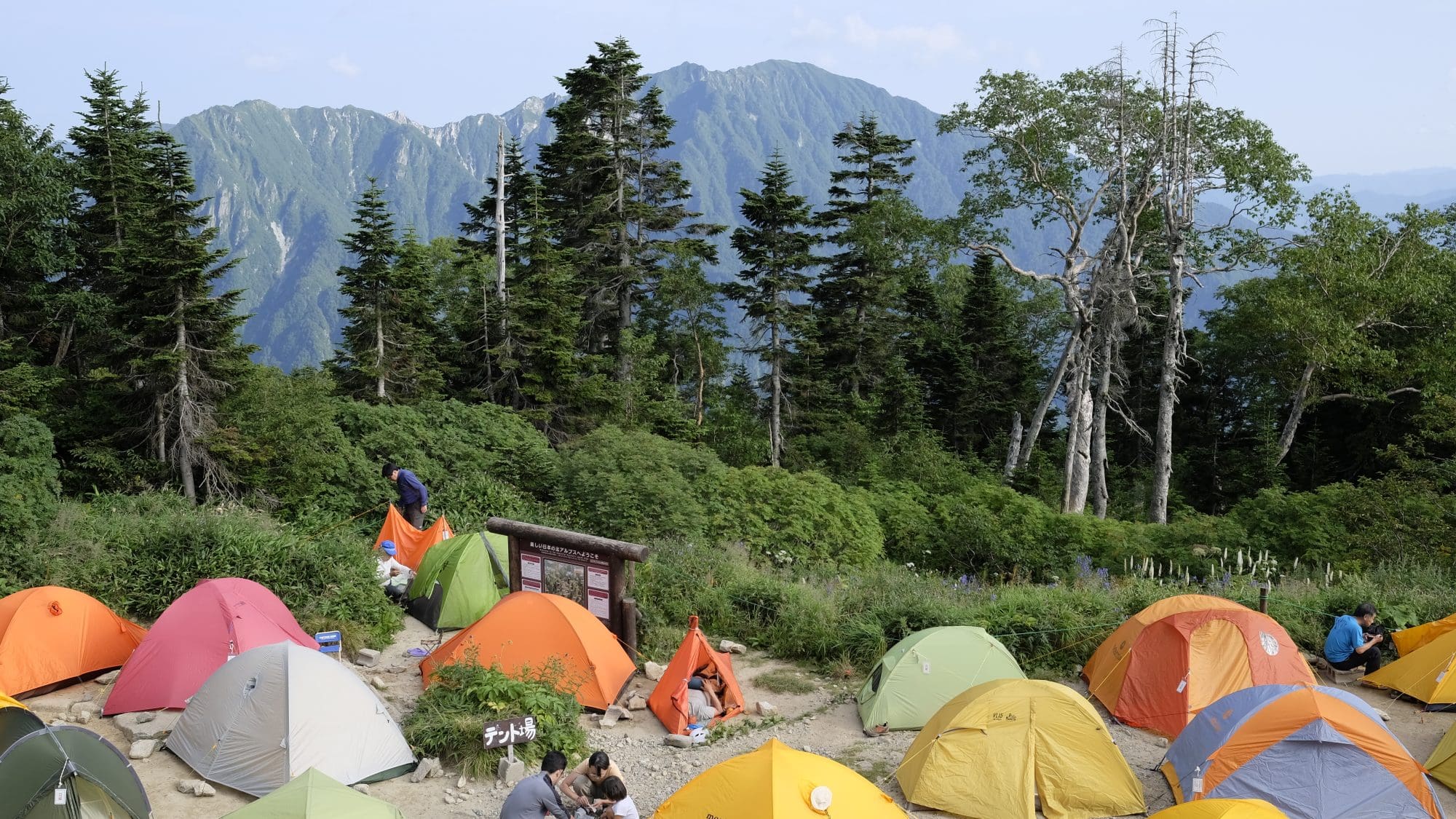 Having fully recovered from my epic hike earlier in the year, over a recent public holiday I decided it was time to hit the mountains again, this time heading to the Hotaka Mountains which consists of five peaks; Okuhotaka, Karasawa, Kitahotaka, Maehotaka and Nishihotaka reaching a height of 3,190 m (10,466 ft) in Nagano prefecture.

The original plan had been to make it all the way from Kamikōchi (上高地) to Mount Yari (槍ヶ岳) over four days but in the end, we had to cut things short and do a circular route instead.

Day 1 started with an early train west from Shinjuku (新宿駅 07:00) to Matsumoto (松本駅 09:42) and then switching to a local train bound for Shinshimashima (新島々駅 10:40). A conductor provided a narration of the local landmarks along the way, not that we could understand much of it!

Due to the holiday, both trains were packed and there was a long queue for the connecting bus to Kamikochi (上高地 10:55). Luckily we were able to get seats the whole way, getting off at the Imperial Hotel Bus Stop (12:15 帝国ホテル前).

The area around the hotel was busy with day tourists enjoying the scenery from the plateau in the Azusa River valley and a police helicopter was practising manoeuvres in the skies above. Signs warned us to beware of brown bears.

After we crossed the river things quietened down and we were soon ascending up the side of the valley under the cover of the trees.

It took around four hours to hike up to Nishiho (西穂山荘) hut which provides commanding 360° views out over the mountain landscape.

Unfortunately, the campground was already teeming with other campers and it took a bit of sheepish negotiation to commandeer a spot squeezed between the other neon domes.

The hut was run with military precision with a weather forecast being read out to everyone before our allotted dinner time at which point one group was told off for talking. The set meal was delicious Japanese fare which was washed down with a free cup of sake. Nobody seemed to be questioning whether it was a good idea to be drinking at 2200 m!

Feeling content after the food we walked a short distance higher to get a good view of the sunset with the clouds gently grazing the mountaintops. It was one of those magical moments that makes all the walking worthwhile.

After the sun went down most people settled into their tents for the night at which point we discovered our neighbour snored loud enough to keep the whole valley awake.

The first sounds of movement started around 2am when the keenest of hikers began packing up for an early start. By the time we emerged at 5am nearly everyone had already gone and we hurriedly ate some rather dry bagels we’d bought for breakfast before taking down the tent and hitting the trail.

It was a beautifully clear morning and, as we made our way up towards the ridge line, we came across a couple of brave souls who’d slept in their sleeping bags outside overnight. I guess we’d been lucky to get a space in the campsite.

Pretty soon the view of the route opened up and the terrain became increasingly precarious. Another hiker who caught up with us asked if we’d hiked the route before and, upon hearing we hadn’t, kindly informed us that five people had perished here in recent history. This did nothing to calm my nerves.

Even though we’d had some fairly hair-raising experiences at Yatsugatake (八ヶ岳) the previous year, this was on another level (quite literally as we would later find out). The entire morning was spent slowly moving across the ridge line negotiating multiple near-vertical ascents and descents one after another. Many of the people who passed were wearing climbing helmets.

Hanging off old metal chains above 3000m drops, unclear where the next foothold was, our energy and water supplies quickly began to dwindle and I was beginning to question whether we would be able to make it to our intended destination of Hotakadakesanso (穂高岳山荘). It was clear that we’d underestimated how hard this was going to be.

Despite the dangers, the scenery was second to none, with the enormous peaks around us passing in and out of dense cloud cover. Supply helicopters would sometimes appear seemingly out of nowhere passing by at altitudes far below us.

The scale of the mountains was something to behold and the feeling of fleeting insignificance as you climb them is all too palpable.

In the hot weather we completely underestimated how much water we’d need and approaching the highest peak in the range, Okuhotakadake (奥穂高岳), we ran out.

Without wanting to make a risky situation any more dangerous we took the executive decision to turn off the main trail at Tengu no koru (天狗のコル) and head down to Dakesawa (岳沢小屋) hut.

Descending was easier said than done since the top part of the route was little more than a steep scree slope covered in loose boulders and we had to be careful not to slip and fall. In the shade of the valley, a large patch of compacted snow remained like a leftover glacial ice sheet.

It was a tough three-hour trek down to the hut without any water which required a lot of concentration. By the time we made it around 4pm I could barely speak and wasn’t in the best of moods. After rehydrating we put up the tent and heated up some curry rice for a delicious early dinner.

Reading a sign in the hut we discovered that the route we’d attempted was rated as level 8 difficulty, whereas Yatsugatake was only level 4. We’d definitely learnt a few lessons from the experience.

After a good sleep, the next morning we had a bit more of a leisurely start and began the hike down to Kamikōchi just before 8am.

The route followed what appeared to be a dried up river bed and was fairly easy going.

We arrived back close to where we started on Day 1 around 10am and enjoyed a nice walk through the primordial forest on our way toward the bus terminal.

I felt a bit guilty that we’d not completed the full hike we’d set out to do but was happy to have made it home safely and now have a much better idea of what to do differently next time. I’m sure we’ll be back!