As predicted it’s been a pretty mad week with more going on that I can even remember at this stage. Good news is that the project is done and dusted, bad news is that exams are two weeks away! 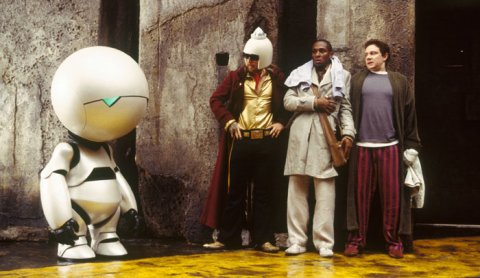 Got a chance to catch the new incarnation of The Hitchhiker’s Guide to the Galaxy. Put simply it’s got its good and bad points. By no means is it awful but at the same time its not great. Unfortunately a lot of what was great in the book/radio series has been sacrificed to squeeze everything into two hours, hence the story line somewhat looses its story! Added to this the acting is patchy in places although there is still a lot to laugh at. If you’re a fan it’s worth a watch but to anyone else I imagine it’s just going to seem a bit strange. (6/10)

He is the embodiment of everything petty in our lives. Every grievance, every envy, every mephitic ideology finds expression in Tony Blair. He says that antipluralism is the only alternative to fogyism. That is the most despicable lie I have ever heard in my entire life. You should not ask, “Why is Blair so compelled to complain about situations over which he has no control?”, but rather, “What in perdition does Blair think he’s doing?”.

(for goodness sake read on!)

Automatic Complaint-letter Generator – So cool, here’s one about a certain friend of ours 🙂