Back in Durham once again – the sun is shining and everything is looking pretty picturesque at this time of year. I wont go on about my impending departure as I think I’ve already said enough about that! The next few weeks are likely to be pretty hectic so I might have to cut down on the posting a bit but have no fear, I will be back with a vengeance this summer (it’s closer than you think)!

Stealing a lecturers laptop is never a good idea, especially when this happens. Even if the professor in question was bluffing he sure sounds serious about exacting revenge on the thief who I imagine must have been more than a little worried when he heard this!

As with any issue there are always two sides to a story. So it seems in the current tensions between China and Japan. Whilst it appears Japan are to blame for their lack of a proper public appology (although one was kind of given the other day) China are far from flawless. Will people never learn just to get along?

A General election is looming next week in the UK. It’ll be the first time I am eligible to vote and will definitely do so. What troubles me is the apathy with which people view politics today – most just don’t seem to care. People have heard all the rhetoric before and simply don’t trust politicians any more. You can hardly blame them. Tony Blair looks set to win again unless there is some major swing in the next few days but even though I detest him is there a viable alternative? One thing is certain though, he wont get my vote! 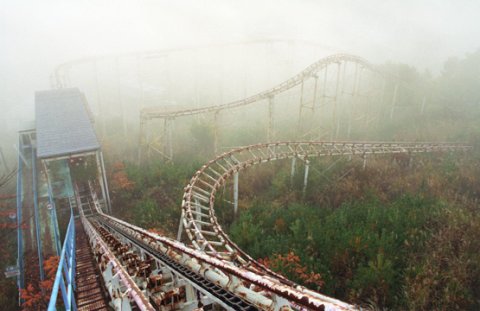 Last but not least – check out these photos from an abandoned theme park in the Japan – they have a certain sense of a nightmare about them as if some sort of disaster has just happened. Spooky. [via Hippoblog]