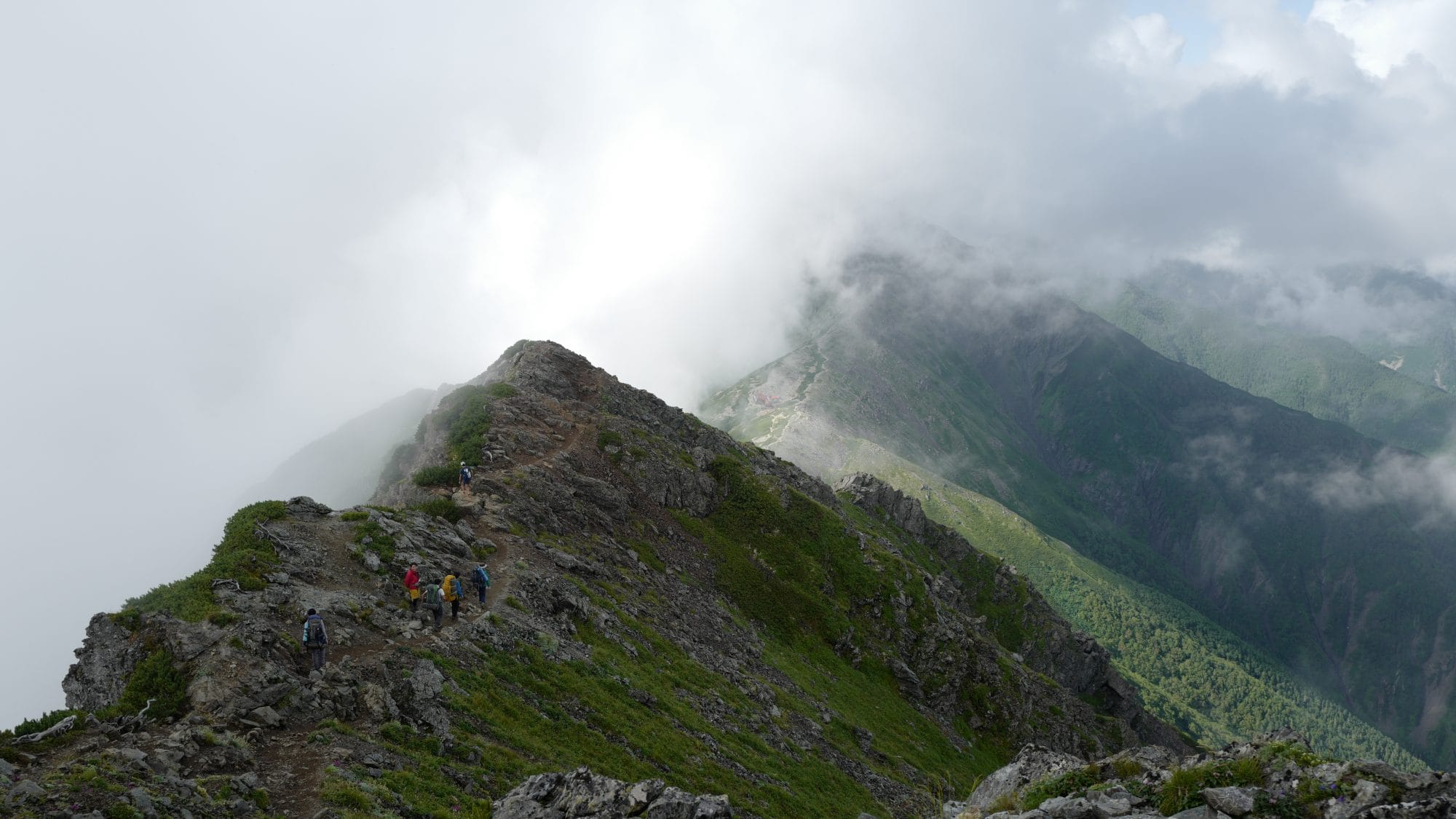 While there are many peaks of a similar height, Kitadake (北岳) takes the crown as the second tallest mountain in Japan, after Mt. Fuji, topping out at 3,193 m. Located in the Minami Alps National Park (南アルプス国立公園), the name Mount Kita literally means “northern mountain,” referring to its being the northernmost of the three Akaishi Mountains (赤石山脈) otherwise known as the “Southern Alps” (南アルプス).

The mountain is surprisingly accessible from Tokyo and while it’s a steep climb to the top, unlike some accents we’ve made in recent years, it’s not particularly dangerous.

Getting to the trailhead requires taking a 1.5-hour train from Shinjuku to Kofu (甲府駅) and then a 2-hour connecting bus (Route 1) to Hirogawara (広河原). We took the 9:05 am bus which arrives at 10:58 am. At the bus terminal is a large visitor centre where there was a crowd of hikers preparing to set off.

Walking up the road you first cross over the Noro River via a suspension bridge and then pass Hirogawara Sanso (広河原山荘) hut/campsite. Following signs towards Shiraneoike (白根御池小屋), the first 20 minutes of the trail are fairly easy going and we managed to pass a number of large groups. After a junction, the path becomes much steeper with 2 hours of solid climbing required to reach the next hut.

Shiraneoike (白根御池小屋) hut/campsite was bustling with activity when we arrived around 1.30 pm. It lies in a pleasant clearing next to a small lake at 2,230 m and is a popular spot for people who want to split the ascent to the summit in half. It has excellent facilities for campers and a restaurant/cafe for refreshments.

After a short break, we continued with the hike towards the summit which was another unrelenting upwards march. Rather than the dense forest of the previous section, here the trail passes through an abundance of lush alpine plants. The species Callianthemum hondoense (キタダケソウ) is endemic to the area.

The top was shrouded in mist when we reached the Mt. Kotaroyama Junction (小太郎尾根分岐) and after 40 more minutes walk along the ridgeline, we made it to Katanokoya (北岳肩ノ小屋) hut/campsite at 4.30 pm (3,000 m).

Most of the tent pitches were already occupied so we ended up with a considerably less-than-horizontal spot on the edge of the mountain.

To escape the damp drizzle we ate our dinner in the tent and only emerged after dark to view the amazing star-field overhead. No sooner had we laid eyes on this beautiful sight, the swirling cloud obscured the view and it was time to retreat once again.

In the early morning, after an uncomfortable night trying to sleep at an acute angle we caught a momentary glimpse of Mt. Fuji in the distance before it vanished behind the clouds. We sat on some rocks, warming up in the morning sun while eating a decadent breakfast of Weetabix and blueberries.

We had originally planned to hike across the ridgeline to camp near another hut but the forecast showed rain and we weren’t really in the mood for getting wet so decided to head to the peak in the morning and then back down the same way we had come the previous day.

The trail to the peak starts to the left of Katanokoya hut which was busy with people coming and going. Leaving our tent set up, we set off shortly before 8 am and joined a procession of other hikers heading in the same direction.

The hike to the top is rocky but not particularly difficult and we had reached the peak of Kitadake (北岳) by 8.30 am. Clouds hung to one side of the ridgeline as if halted by an invisible barrier while on the other side we were granted intermittent visibility of the green valleys far below.

After enjoying the view we began the long trek back down the way we had come, stopping to pack our tent on the way.

We made it back down to Hirogawara shortly after 4 pm, having stopped for lunch at Shiraneoike again on the way down. Barring the mist and some sore knees, it had been a fantastic hike and I wouldn’t mind a return trip in clearer conditions.

As always, Ridgeline Images has more practical advice on the route.