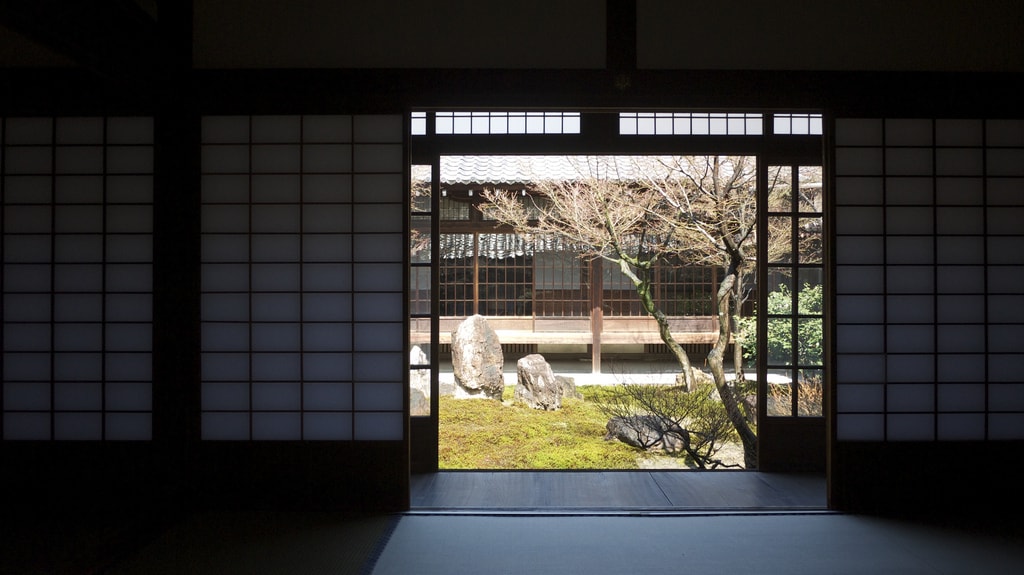 After a chilly walk along the Philosophers Path in the morning, I headed south to Gion and the oldest Zen temple in Kyoto – Kennin-ji (建仁寺). Dating back to 1202, its grandeur is not immediately apparent but step inside and you’ll enter another world.

Screens depicting Fujin (風神), the god of wind, and Raijin (雷神), the god of thunder, by Tawaraya Sōtatsu (俵屋 宗達). The originals are in Kyoto National Museum although you’d never guess that they are reproductions.

The Circle, Triangle, Square garden is based on a famous piece of calligraphy by Sengai Gibon (仙厓 義梵) and represents the core geometric forms from which all others are derived.

The perfect spot to pause and take it all in – pictures don’t do it justice.

Behind the main temple building lies the Chouontei, the “garden of the sound of the tide” which has three central rocks representing the Buddha and two Zen monks, and a stone for seated meditation.

The mossy garden, overhung by beautiful maples, affords visitors a different view from all four sides.

The Daio-en or Grand Garden, where the pattern of white gravel is said to symbolise a field of clouds.

An enormous painting of Twin Dragons by Koizumi Junsaku (小泉 淳作) adorns the ceiling of the Hatto or Dharma Hall. While the building was constructed in 1765, the painting was installed in 2002 to mark the 800th anniversary of the founding of Kennin-ji Temple.

Outside I spotted a Maiko (舞妓) but I suspect it was just someone playing dress-up!