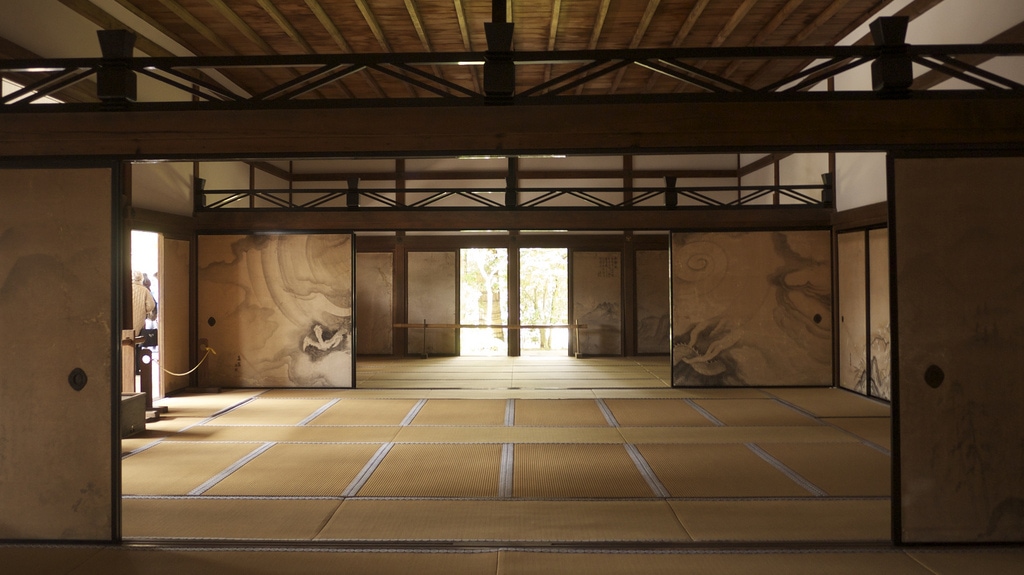 Something you’re bound to see plenty of in Kyoto are zen gardens, otherwise known as “dry landscape” gardens (枯山水 karesansui). One of the finest examples can be found at Ryōan-ji (龍安寺) located in the northwest of the city which is thought to have been built in the 15th century.

Classical zen gardens were created during the Muromachi Period and are intended to imitate the essence of nature, rather than its actual appearance, as well as to serve as an aid to meditation about the true meaning of life.

They create a miniature stylised landscape through carefully composed arrangements of rocks, moss, pruned trees, and use gravel or sand that is raked to represent ripples in water.

Surrounded by a wall made of clay, stained by age with subtle brown and orange tones, the rectangular garden contains fifteen stones of different sizes, carefully composed in five groups. The stones are surrounded by white gravel, which is carefully raked each day by the monks.

The garden is meant to be viewed from a seated position on the veranda of the hōjō, the residence of the abbot of the monastery. The boulders are arranged so that only fourteen are visible at one time. It is said that only through attaining enlightenment would one be able to view the fifteenth.

“The garden of Ryōan-ji does not symbolise, nor does it have the value of reproducing a natural beauty that one can find in the real or mythical world. I consider it to be an abstract composition of “natural” objects in space, a composition whose function is to incite meditation.”

While it shares many of the same characteristics as other temples in Kyoto, with its extensive grounds, Ryōan-ji is worth the visit especially if you want to a zen garden in its purest form.