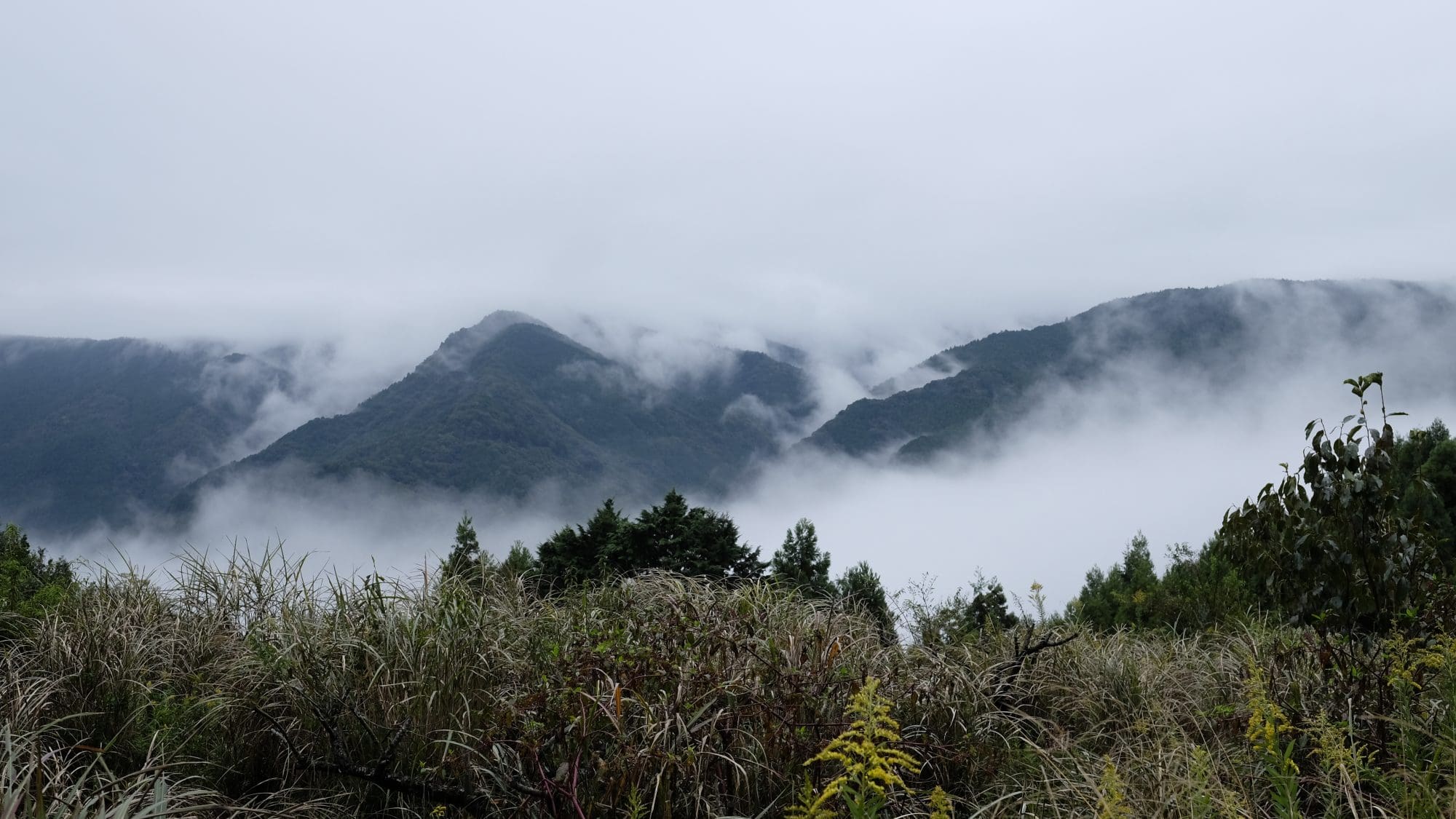 I always knew I would return to Shikoku although I hadn’t anticipated it would be quite so soon. A little over four months since I completed the pilgrimage, I find myself back on the island but this time without any strenuous obligations. I’m here to attend a few events and acclimatise before another expedition next week.

Yesterday I was lucky enough to visit Jigen-ji (慈眼寺), no.3 of the 20 bekkaku (別格) temples which are secondary to the main 88. The mist shrouding the rolling horizon was particularly apt for the adventure ahead.

Located in the town of Kamikatsu (上勝町), Tokushima, Jigen-ji has a particularly interesting secret hidden in the mountainside above its okunoin (inner sanctuary).

It is said that Kūkai (空海), the revered Buddhist monk known posthumously as Kōbō-Daishi (弘法大師), came to this place to pray that all living beings be spared from suffering. He discovered a cave and for three weeks sat in front of it reciting sutras and conducting a fire ritual.

From the depths of the cave, an evil dragon emerged and tried to attack Kūkai as it had done to the local villagers. Kūkai drew a Sanskrit letter on a small rock, threw it into the dragon’s mouth, and the dragon became entrapped in the walls of the cave.

With thoughts of The Hobbit running through my head, our diminutive guide gave us a stern lecture about following her instructions closely as we approached the mouth of the cave.

Before signing up for the tour we’d already had to prove that we could make it through the labyrinth by squeezing between two stone pillars 25 cm apart back at the main hall. After this, we’d been provided with a candle and a white robe which serves both to keep your clothes clean and as part of the ritual.

I had to take off my glasses and leave behind my main camera because there wasn’t going to be space to carry them safely. Blind as a mole, I lit my candle and followed the others into the mouth of the cave.

The walls immediately narrowed to a tight slit through which you can barely walk through sideways, keeping your head facing straight ahead. There is no room to turn around and the feeling of claustrophobia immediately began to kick in.

Five minutes later we had to get down on all fours and crawl horizontally through a winding tunnel barely big enough to fit through while clinging onto the fragile candle. All my instincts were telling me to get out but by this point, there was no going back.

About 50 m into the cave, the space opens up a little and the guide pointed out a patch of wall where the dragon’s body is believed to be entombed. A rock formation that resembles a set of claws can be seen.

From here you descend down a narrow opening by a ladder and then contort your body through another tunnel, trying not to scrape your head against the unforgiving rock face.

On more than one occasion I inadvertently extinguished my candle and was plunged into pitch-black darkness before the person ahead could wriggle back to give me a light.

Eventually, you reach a larger cavern with a statue of Kūkai at one end and a space to pray. We extinguished our candles and the guide led an atmospheric rendition of the Heart Sūtra.

The cave tour is titled ana zenjo  (穴禅定) which literally means “hole meditation”. The experience reminded me of Toru Okada in The Wind-Up Bird Chronicle who descends to the bottom of a dried-up well in order to think.

We took a different route out and after about an hour underground I was relieved to re-emerge back into the daylight and fresh air.

The cave tour costs ¥1,500 per person and is run on an irregular schedule each day till 3 pm.

We walked back down to the main hall with the sun setting over the misty mountains our minds still abuzz from the adrenaline rush of our exertions.

The day was topped off with a visit to Cafe polestar, a tastefully designed establishment that serves delectable desserts. Highly recommended!