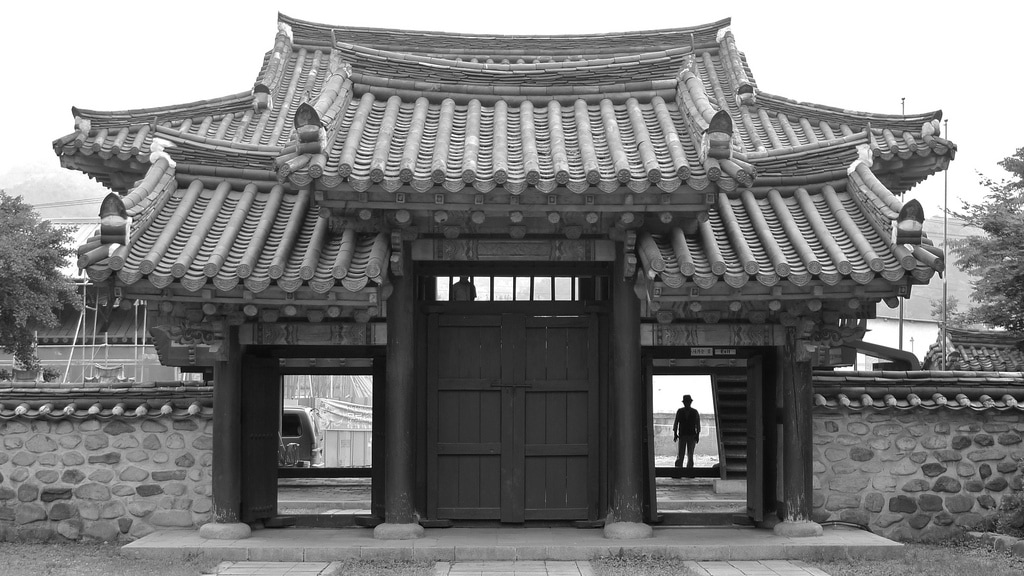 We conclude our photographic journey around Jeonju in South Korea (Pt. 1 & 2) on the third and final day of my stay there. With only half a day left before heading back to the crowds in Seoul it was definitely time to take advantage of the relaxing surroundings of the Hanok Village…

Something I’ve consistently noticed when travelling in South Korea is that there rarely seem to be any large crowds, even at popular tourist spots. Perhaps the Korean tourist organisation just isn’t very good at advertising itself or maybe it’s just my good luck but it definitely seems to be a trend (Interestingly the KTO recently changed their slogan from “Korea Sparkling” to “Korea, Be Inspired” after much criticism – better or worse?).

Flying umbrellas (minus Mary Poppins) – I’m not sure what this was all about but it may have had something to do with the Jeonju International Film Festival held every year nearby.

For lunch we discovered a small restaurant which specialized in vegetable curry, providing only two choices: mild or hot. You can find it opposite the east gate of Gyeonggijeon Shrine and note that it’s only open 11.30 am to 3 pm. The waitress/chef is also pretty cute 😉

A generous serving of curry is accompanied by rice and bread – simple but delicious and perfect for a light lunch. I had the mild option and my friend had the hot – both were as advertised!

After lunch, we took a look around a few shops selling products made from a special paper called Hanji (한지). Hanji is traditional Korean paper made from the bark of mulberry trees called chomok. It is a neutral paper since it doesn’t rely on any acidic chemicals or artificial bleaching methods making it much more long-lasting.

The paper was traditionally used to cover windows and doors to keep rooms warm and protect them from the wind. Today it’s used in all manner of handicrafts and even in clothing, although I’m not sure how comfortable a pair of hanji pants would be! Given the amount of manual labour required to produce the intricate designs most of what you can buy is pretty expensive.

While walking toward the southeast of the village I was impressed by this gentleman’s ability to smoke and cycle at the same time. There is a certain irony in the duality of this combination.

After a wander through a former imperial school for the emperor’s kids, our final stop before heading back to Seoul was at a newly opened dessert shop where we sampled a number of tasty snacks…

Tteok (떡) – a cake made from glutinous rice.

And so ended an unforgettable trip to what has to be one of my favourite places I have visited in Korea. If you like culture, tradition and good food then Jeonju is definitely worth a visit.