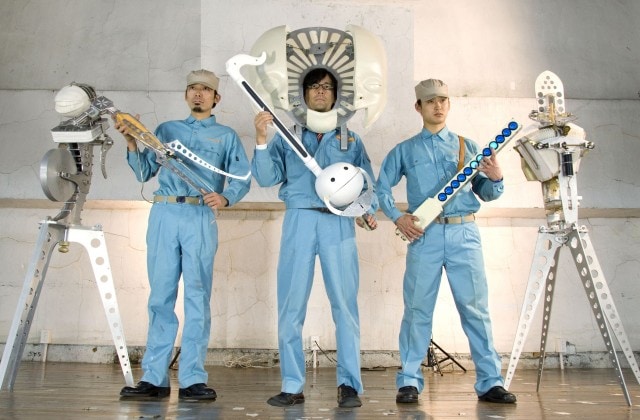 It’s been a while since we last visited the more unusual side of Japan but today I thought I might share with you a few more unique, or shall we say alternative, artists who roam its shores providing us with some refreshingly different distractions (see Parts 1, 2, & 3). Presented in order of high to low artistic integrity!

Natsumi Hayashi lives in Tokyo with two cats and posts daily self-portraits of herself levitating in various places and poses (cats not levitating). The combination of her almost comically natural expressions and well-framed surroundings create such a surreal feeling that brings a smile to my face every day:

Genki Sudo is a former Japanese mixed martial artist and kickboxer who after retiring became a singer, dancer and actor in Japanese dramas (like you do). His group, WORLD ORDER, has a marvellously choreographed hypnotizing robotic dance style which has to be seen to be believed:

The music is also pretty catchy!

The video above was made especially to show world solidarity with the people affected by the recent earthquake and tsunami in Japan. It’s quite a marvel of synchronized precision.

Meywa Denji is a Japanese performance group, an art collective, and an educational organization created by Nobumichi Tosa. He makes nonsensical instruments from random electronic parts which he deems ‘products’ that are then used in live ‘product demonstrations’ (or performances to you and me). Check out this BBC report on what they do:

Sadly most of the ‘product prototypes’ are not for sale although you could pick up a Otamatone.

WARNING: The video below is not for children, Catholics, or the morally sensitive. If in doubt do not watch.

Every now and then the Japanese create a film that is so outrageous that it almost defies belief. Directed by Sion Sono, the premise of Love Exposure (愛のむきだし) is quite simple; a Catholic priest has an affair which causes him to force his son, Yu, (from his previous wife who died) to confess his sins daily. The priest gets mad if Yu doesn’t confess anything so he commits increasingly bad sins to provide him with something to say to his abusive father. To make matters worse the boy falls in love with an equally messed up girl who he mistakes for the Virgin Mary. At four hours long this is just the tip of this crazy iceberg.

Phew. Now for something completely different…

While not technically 100% from Japan, Nyan Cat, also known as Pop Tart Cat, is an 8-bit animation depicting a cat with the body of a cherry pop tart flying through outer space in a repeating loop. The animation and music were separately produced by different artists but it wasn’t until they were combined together that it really took off:

Addictive right? The cat reminds me of a certain friend of mine 🙂

I hope you’ve enjoyed this short trip from the top to the bottom of Japanese artistic endeavours, hope you’ve not been too badly shocked!