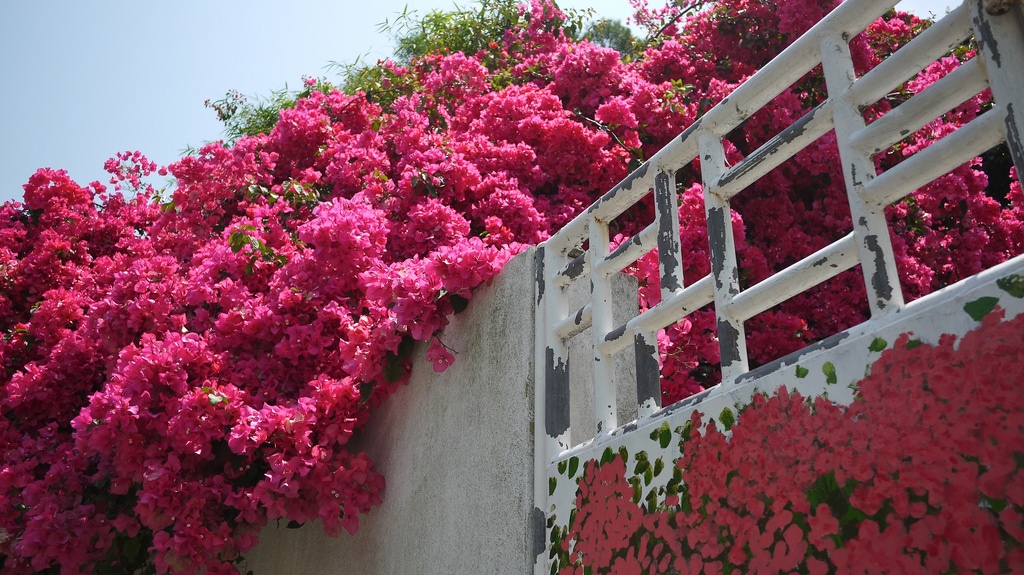 A few weeks ago before my life turned überbusy I visited the tiny island of Peng Chau (坪洲) located off the north-eastern coast of Lantau Island in Hong Kong for a bit of R&R. Around 6,300 people live on the island which, only being around 1 km², can easily be explored in a couple of hours.

You can get to Peng Chau by ferry from Central Pier 6, a journey which takes 30-40 mins. As it was around the time of the Tin Hau festival colourful silk flags lined the small port/harbour entrance.

Outside the Tin Hau temple a hand-made paper figure, presumably of the deity herself, stood guard over the lives of fisherman and sailors, protecting them from bad storms.

Life on the tiny island seems pretty laid back with many of the houses being little more than shacks arranged around a few narrow streets. The only form of transport is by foot or bicycle.

Somehow you almost expect to see rusty machinery in a place like these where time seems to be standing still.

A dragon sits at the edge of an incense burner covered in ash – this particular temple is dedicated to Lung Mu, the Dragon Mother.

Yet another dragon nearby sits proudly on the front of a slowly rotting boat – will it ever race again?

In such a small community hanging your washing out to dry on the street isn’t so abnormal!

Even in winter, the owner of this house can still enjoy the beautiful blossom since they’ve also painted them on the gate (not that Hong Kong has much of a winter anyway).

As I wandered up the gentle incline of the hill it felt like I had the whole island to myself, such was the quietness of it all.

Looking back down from the highest point of the island, known as Finger Hill (a modest 95 meters high), you can see the curvature of the island with the Tung Wan beach on the eastern side. Lantau Island can be seen in the background, with the buildings that make up Discovery Bay.

On the southern side of the island, near the sea, I came across a patch of land that had been scorched by a forest fire which I guess is not uncommon considering the dry weather and hot climate.

Surprisingly the island used to be home to the Great China Match factory which was the largest in Southeast Asia until its closure in the 1970s. It was also the epicentre of Hong Kong’s lime production industry.

Looking east from the shore you can just about make out the skyscrapers on Hong Kong island.

I headed back to the western side of the island where large (fishing?) boats were moored.

Nearby the site of the old match factory is the colourful Seven Sisters Temple (七姊廟) which was built by a local who apparently received instructions to do so in a dream.

Walking around the northern tip of the island I came across a couple of men fishing from large rocks on the beach.

And so after a simple late lunch in one of the small restaurants which line the main street, I headed back to the ferry terminal to rejoin the hustle and bustle of city life.