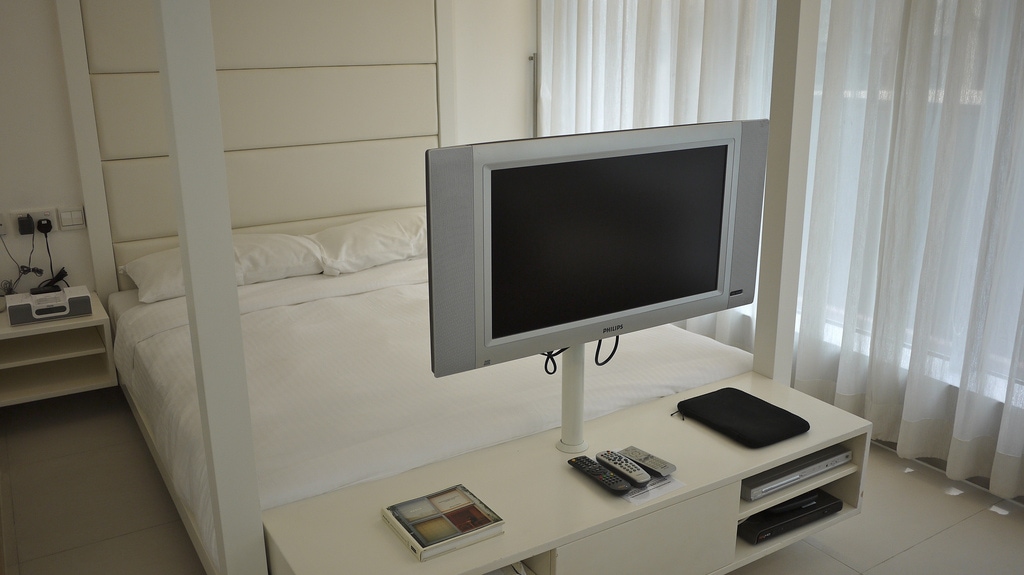 Last weekend I finally moved out of the airport hotel and into a serviced apartment on Hong Kong Island where I’ll be for the next month until I find something more permanent. Having surveyed the options available there were clearly some tradeoffs to be made on the location vs price front but in the end, I found somewhere pretty good.

I have a bit of a thing for clean minimal interiors so when I came across Domus Mercury I knew I was onto a winner. Situated between Tin Hau and Fortress Hill on the northern perimeter of HK Island it’s one of three properties the group owns and contains 69 apartment units ranging in size from 475 square feet to 981 sq. ft.

Given my fairly constrained budget, I had to go for the smallest studio apartment which is quite adequate for a single person but would probably be quite cramped for a couple spending any significant time here. The price is steep for such a small place but by Hong Kong standards it’s nowhere near the high-end of the market, more lower-middle from what I’ve seen.

For your money, you get a clean and bright space which is sparsely furnished but comes with all the essentials. Being a serviced apartment you don’t have to worry about providing your own linen, towels, or cleaning which is done twice a week – it feels somewhere between living in a hotel and your own apartment.

The apartments have floor-to-ceiling windows which are covered by soft semi-translucent white curtains. There are also black-out blinds which can be shut at night but because there are so many the downside is it becomes a bit of a chore. I know, life is hard 😉

Being a studio, the lounge area is situated right behind the bed with a swivel TV which can be angled in either direction. I’ve nicknamed it the “divorcees lounge” given that if you had two people sitting in the chairs they couldn’t see each other owing to a large supporting column in between!

From the bed, the juxtaposition becomes even more obvious but I like the symmetry. Behind the bed on the left is a small closet and on the right can be found the bathroom.

I once stayed in a tiny HK hotel where the shower was situated directly over the toilet so, considering the overall size of the apartment, the bathroom here actually feels quite spacious (although all the white surfaces are making me paranoid about making a mess).

There’s no bath but instead, you get an awesome waterfall shower head – all bathrooms should have one.

Between the lounge and kitchen area is a small table which doubles as a somewhere to work or dine. During the daytime, the bright space is very welcome but at night it can be a bit harsh since the lights are either full on or off without anything in-between. Waking up in this light box with a hangover would probably be a painful experience!

In case you were wondering “Domus” is Latin for “Home” and the group goes out of its way to emphasize its green credentials by employing systems that recycle the heat emissions from the air-conditioning system to produce hot water while maintaining a constant fresh air supply at the same time.

The kitchen is compact in the extreme – don’t expect to be cooking any banquets here. All you get is a microwave, ceramic hot plate, saucepan and basic cutlery – there’s also a fridge/freezer in an adjacent cupboard. Calling it “fully equipped” is pushing the truth.

Above is a short video I shot giving a quick 2-minute tour – be thankful I’ve saved you from the version with my audio cometary.

Situated on the roof of the 27th floor is what they call the “Sky Deck”. To one side is the 24-hour “fitness centre” which is little more than a shed with a couple of treadmills but with great views out over the city, you can hardly complain.

Here’s how it looks on a hazy day – in the distance, Wan Chai can be seen with the Hong Kong Convention and Exhibition Centre on the right near the top.

In Hong Kong usable land space is so constrained that people were forced the build upwards long ago – I love being able to look out over the rooftops – it brings back memories of New York.

Those afraid of heights will want to keep their eyes strongly focused on the horizon! Around this area are loads of tasty restaurants which cater to all budgets, from cheap noodles to full-on Michelin star-rated places.

At night the view is even better – I sometimes come up here in the evenings just to stand and stare.

If you’re thinking of renting a room in Domus Mercury here’s the bottom line:

If you know of any other good reasonably priced serviced apartments in Hong Kong feel free to leave a recommendation below.