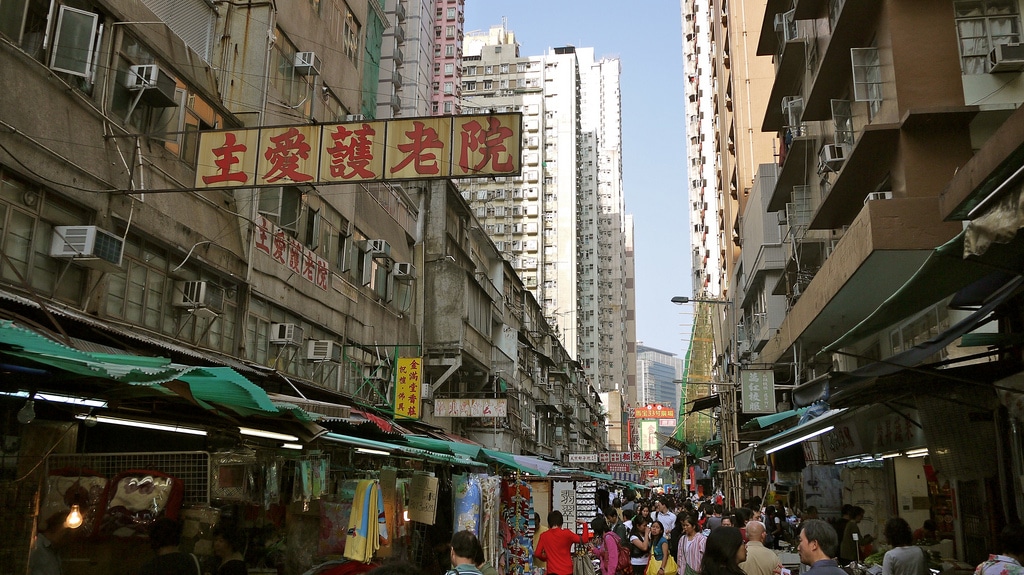 Away from the glitz of Hong Kong’s many skyscrapers, the city is much like any other with a mix of people from all walks of life. Having been segregated from mainland China for much of the last century it’s developed its own unique culture and ways of dealing with the inherent lack of space.

Living conditions for many of Hong Kong’s residents would be described as cramped at best with the average apartment size being around 600 square feet. Try squeezing a family of 5 in that space and you’ll understand one of the reasons why people are working longer hours, getting richer, but having fewer children.

The dense conditions make for some unique urban planning problems that have led to some interesting architecture and one of the things I enjoy doing is wandering around the older districts soaking up some of the sights and sounds of daily life.

In the area around Canton Road and Reclamation Street, the buildings and streets are densely layered with the grime and scars of age clearly visible but strangely beautiful. Many of the shops extend out beyond the pavement with stalls selling mainly fresh fruit, vegetables, and meat.

Strings of incandescent light bulbs illuminate the market stalls produce but I noticed that in many are rapidly being replaced in favour of more energy-efficient alternatives which makes for an odd contrast between old and new technology.

As with the UK, it seems there’s always construction going on around every corner. Because of the constrained space diggers and other mechanical equipment have had to be shrunk down to be able to manoeuvre into the tightest of gaps.

Flyposting in Hong Kong is rampant, with posters even being pasted over shop windows during the night. It might be illegal but I quite like the texture it adds to otherwise boring surfaces.

To me owning a car in a big city seems a bit pointless if public transport is good (as it is in HK) – I’d much rather ride a folding bike like this chap above but am always a bit fearful of the rate drivers tear around the narrow streets. Having been knocked off my bike by a car on the way to school many years ago I’m not sure it’s worth the risk.

Even though many of the old buildings are pretty faded a few have been spruced up with brightly painted walls. Notice the bamboo scaffolding on the right – its flexibility makes it much safer than steel which can be torn off buildings in high winds. The art of bamboo scaffolding is a skill which is passed down from generation to generation

Hong Kong currently has one of the lowest birth rates in the world with a fertility rate of 0.9 in 2009 meaning the average woman here will have less than one child in her lifetime. The minimum replacement fertility rate is 2.1 children for each couple, meaning Hong Kong is facing tricky socioeconomic issues.

Japan is facing similar problems and the ultimate solution is probably to open the immigration gates to those who can fill the demographic gaps but that’s never an easy pill for any country to swallow. Hong Kong already has a massive transient population of Filipino domestic helpers so perhaps the simplest thing would be to give some of them the right to remain.

Ask anyone what the most iconic symbol of Hong Kong is and they’ll probably reply with the hanging street signs. While newer signs are mostly neon the older ones come painted in a single or two-tone colour on square boards like above.

While looking for a new apartment I took a stroll in another distinctly local district near North Point from Chun Yeung Street to Marble Road (I found a place not far from here but will save that for another post). When the Communist Party took control of China in 1949, many Shanghai businesses moved directly to North Point which became known as “Little Shanghai”.

Shops like these fishmongers looked like they’d been around for decades. None of that shrink-wrapped, pre-packaged malarkey around here!

The streets were packed with people buying their weekly groceries and the bright afternoon light created an ethereal haze in the canyon-like chasm between each row of buildings.

Even in the jungle of impermeable concrete… “If there is one thing the history of evolution has taught us it’s that life will not be contained. Life breaks free, expands to new territory, and crashes through barriers, painfully, maybe even dangerously.” – Jurassic Park

If you like your meat fresh then this is the place to come. If you’re a vegetarian then it’s probably all a bit macabre.

More hustle and bustle a world away from the sterile brands which purvey the huge shopping malls which have invaded many parts of the city. I’d love to get a look inside some of the apartments above the shops to see what the interiors are like.

And so ends my rather rambling discourse through old Hong Kong – I hope it perhaps inspires you to occasionally take a turn off the beaten track when exploring any urban environment as what’s lying beneath the surface is often just as interesting, if not more so, that what you can see on the surface.