There can be no doubt that we are now at a point of being inexplicitly dependant on the Internet. The more I think about the evolution of the internet the more I am convinced about the emergence of a new collective conciousness which has formed an almost symbiotic relationship between man and machine through which we are now globally connected. There is almost no part of our lives which it does not touch and if it were to collapse tomorrow the results would be devastating.

Looking at what’s going on in the world right now; we have the outsourcing of jobs, the open-sourcing of software, and the crowdsourcing of just about anything to anyone with the right skills. All of this and much more is taking place because of the global platform which is the internet and crosses previous boundaries of language, culture, territory and even law. Some people and places are further down this road than others but the direction is irreversible and is disrupting everything we knew before.

As well as being a communications channel, taken at an abstract high-level, the internet could be seen as an intelligent superorganism feeding off electricity and the input we give it filling endlessly expanding data centres with every conceivable thought of mankind. Whether this can truly be called intelligence has yet to be determined but in essence we have added another another dimension to our reality allowing us to move beyond physical constrains (more about the 10 classical dimensions in the mind bending video below).

We could perhaps give a further analogy of an ant colony where the ants appear chaotic but operate as a unified entity, collectively working together to support the colony. From one perspective the internet is also a chaotic mass of unstructured conversations with no central organisation but underneath amazing things are happening. One of the most obvious examples would be Wikipedia where a comprehensive encyclopaedia has grown from the work of millions of individuals, each a tiny part of the bigger jigsaw puzzle. This is more than mere facilitation. 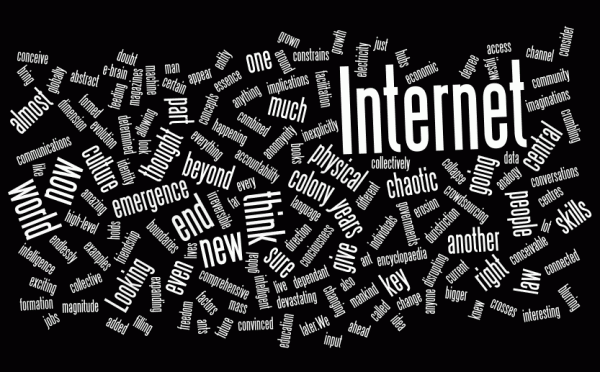 In our rapidly changing world where the old systems are crumbling around us I think there are some interesting implications for what the future holds, the potentially seismic shifts ahead, and how the internet will play a key role. Whilst I can’t profess to have thought this through to the ninth degree here are some key points I think are prudent to consider –

I’m not even sure its possible to conceive the potential magnitude of the change that these factors will bring when combined and I’m sure there is much which is beyond our current imagination but we can be certain that the world is going to look a lot different in 50 years time. I still like my e-brain idea which isn’t looking so far out two years later. We live in scary and exciting times!