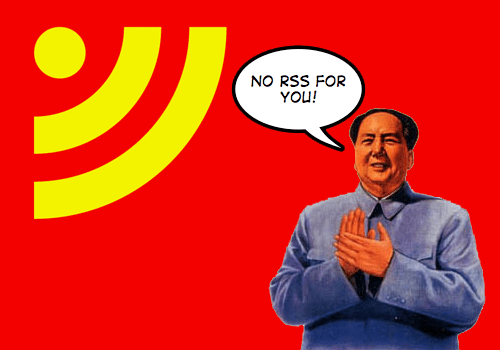 I hate to sound like a broken record but this is getting ridiculous – in further efforts to “create a harmonious and prosperous society” China has begun to block RSS feeds in addition to their other draconian internet censorship measures [via]. From the communist party’s perspective, this makes perfect sense as RSS (Really Simple Syndication) is a great way to stay up to date with the latest news and up till now has flown under the radar.

At the beginning of the year, you could read and subscribe to my blog in China with no problems at all. Now both images and feeds are blocked. I wonder how long before the whole thing’s out-of-bounds? It really makes me mad to see the internet being abused like this, after all, its founding principles were to create a platform for free information exchange without borders or controls.

Along with blocking other major sites like Wikipedia, BBC News, & Flickr this just marks another blow to the government’s credibility, especially in the run-up to the Olympics.

How about a nice propaganda video to round it all off: