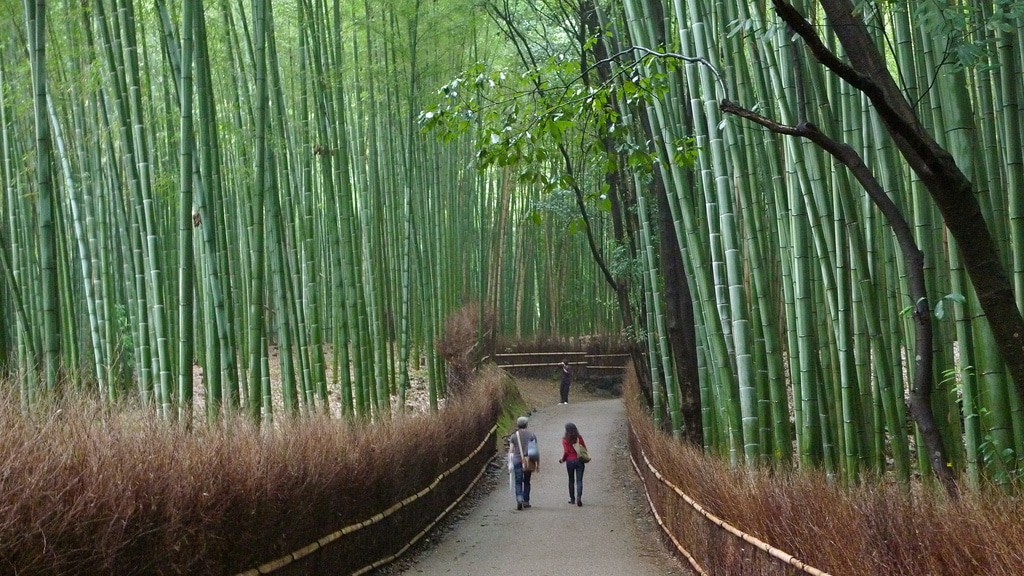 On my second day in Kyoto thick clouds hung in the air as I made my way to the north-west outskirts of the city to explore the districts of Arashiyama (嵐山) and Sagano. After a fifteen-minute journey on the Sagano Line from Nijō Station (near the hostel I was staying at) I arrived and made my way through the quiet streets to my first destination…

Tenryu-ji (天龍寺) was founded in 1334 and was part of a network of state-sponsored Zen Buddhist temples known as the Five Mountains. The system was controlled and used by the country’s ruling class for its own administrative and political ends. The temple was destroyed and rebuilt many times by fire and war during its history so most of the buildings today are reconstructions from the Meiji period.

Even on an overcast day, it was a joy to wander through the immaculate garden which retains much of the original form as when it was designed by Musō Soseki in the fourteenth century. With the many shades of green providing a lush backdrop to this oasis of calm, I was feeling very zen-like!

Bamboo forests are among some of my favourite places, such is the sense of mystery and tranquillity they create. In the future, if/when I build my own house I plan to plant a small bamboo grove somewhere.

There are many types of stone lanterns like this which originally came from China during the 6th century. This type is known as ishidouru (石灯籠).

The garden features a circular promenade around Sōgen Pond (曹源池) with the mountains on one side and temple buildings on the other – if you’re looking for enlightenment then this is the place to come. Visit early in the morning on a wet day and you’ll be able to enjoy the place to yourself.

I love the way that the outside becomes a seamless continuation of the inside when the paper-thin doors of a traditional Japanese house are opened up.

In Japan, an empty room creates “potential” to be any room and often has nothing that is permanent, even the “walls” or fusuma (襖), slide away to create a larger empty space which can be reconfigured depending on the occasion. This philosophy is even reflected in the name of the company MUJI, where “Mu” means “empty” or “absence” with a hint of “tranquillity” and “potential” (source).

Imagine waking up to this view – simply magical.

After exiting the temple via the north gate you will find yourself at the foot of an amazing trail which winds through the bamboo grove towards Okochi Sanso. The bamboo is still used to manufacture various products, such as baskets, cups, boxes, and mats at workshops in the area.