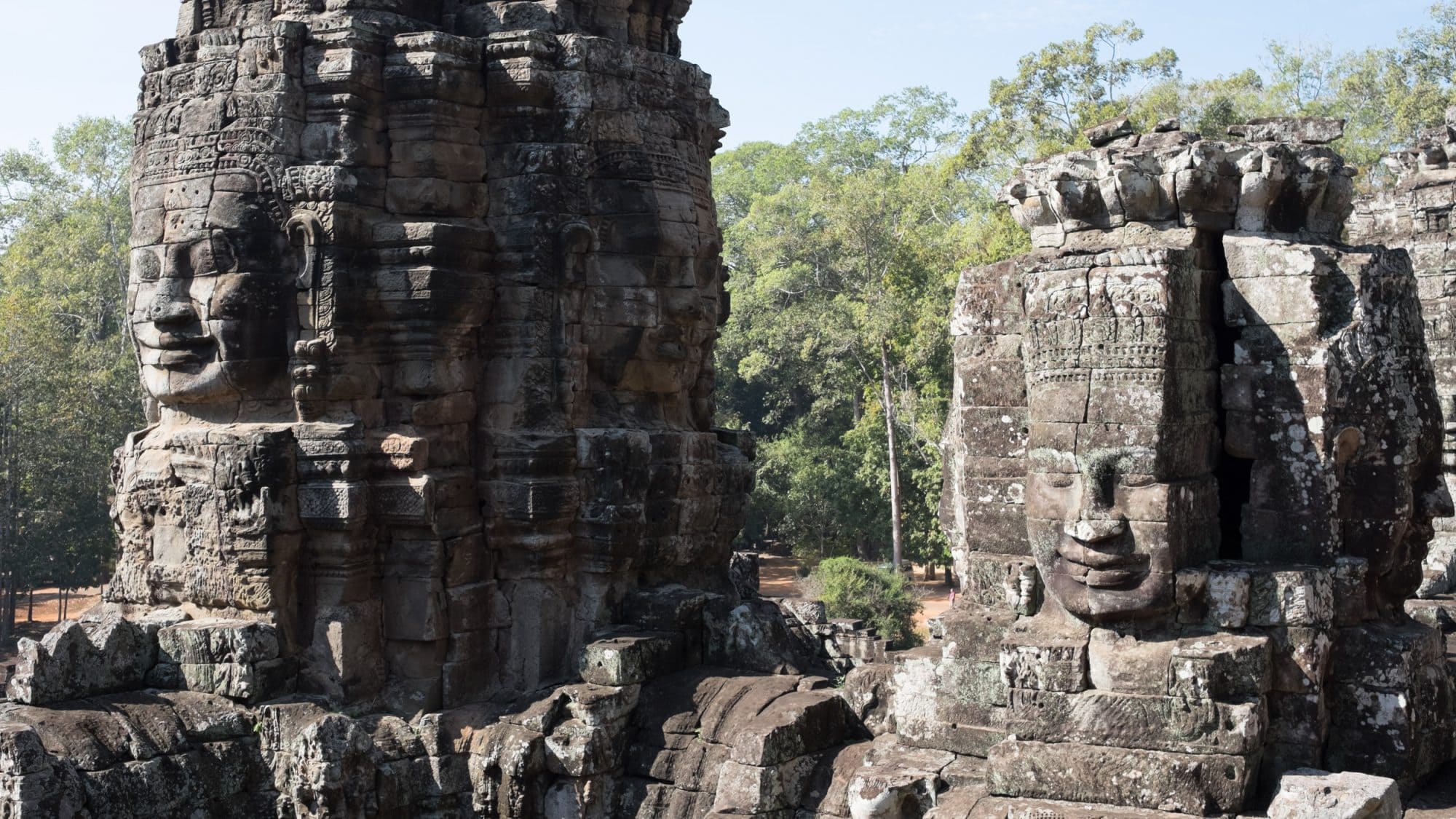 1.7 km north of Angkor Wat and covering 9 km² lies the last capital of the Khmer empire which was established in the late twelfth century by King Jayavarman VII. At the centre of the city is Jayavarman’s state temple, the Bayon, with the other major sites clustered around it.

Angkor Thom (អង្គរធំ) is surrounded by walls 8m high and enclosed by a wide moat.

A causeway spans the moat in front of the gate tower which is lined with statues of Hindu deities on either side, each holding a naga (snake) in the attitude of a tug-of-war. This appears to be a reference to the myth of the Churning of the Sea of Milk (short version: a bunch of gods and demons worked together to churn the ocean and release the nectar of immortal life).

Bayon is one of the most widely recognised temples in Siem Reap because of the 200+ giant stone faces that adorn its 50+ towers which jut out from the upper terrace and cluster around its central peak.

The temple is known also for two impressive sets of bas-reliefs, which present an unusual combination of mythological, historical, and everyday scenes.

Within the temple itself, there are two galleried enclosures and an upper terrace. Unlike Angkor Wat, which impresses with the grand scale of its architecture and open spaces, everything in the Bayon is tightly compressed and surprisingly claustrophobic.

There is still a debate as to who is being depicted in the faces. It could be Avalokiteśvara, Mahayana Buddhism’s compassionate Bodhisattva (an enlightened being), or perhaps a combination of King Jayavarman VII and Buddha.

Since 1995 the Japanese Government team for the Safeguarding of Angkor (the JSA) has been the main conservatory body and is actively working to preserve and restore the temple.

Built earlier than Bayon, in the mid-11th century, Baphuon is a three-tiered temple mountain built as the state temple of Udayadityavarman II dedicated to the Hindu God Shiva. In the late 15th century it was converted into a Buddhist temple.

French archaeologists had dismantled the Baphuon to perform renovation when they were interrupted by the civil war in the 1960s; the records for piecing the temple back together were subsequently lost or destroyed. Today the reconstruction work is complete, so visitors can now walk up to the topmost tier.

Phimeanakas was built at the end of the 10th century, during the reign of Rajendravarman, then rebuilt by Suryavarman II in the shape of a three-tier pyramid as a Hindu temple.

Attached to the ruins of Phimeanakas is a platform known as The Terrace of the Elephants, famous for its elephant carvings, which were used by King Jayavarman VII to view his victorious armies returning to the ancient city.

Thommanon is one of a pair of small Hindu temples which sits opposite Chau Say Tevoda (below). The temple’s carvings are very well preserved and the aged sandstone provides a distinct contrast to the surrounding jungle.

Chau Say Tevoda is another small Hindu temple which has recently been restored thanks to a project initiated by the Chinese Government team for the Safeguarding of Angkor (the CSA).

Ta Keo was possibly the first temple to be built entirely of sandstone by Khmers and is dedicated to the Hindu deity Shiva. The four corner towers on the summit surround a larger central tower which stand on a basement 4 meters high. The climb to the top is particularly steep and not for the faint of heart.

The absence of external decorations is due to the fact that it was never finished. Inscriptions say that a lightning strike hit the building during construction, an evil omen, so the works stopped.

One of the most fascinating things I learned during the visit was how over the last century, archaeological teams from around the world have been involved with the protection and restoration of Khmer monuments, including France, Japan, India, China, Switzerland and New Zealand. Nice to see counties doing something positive together for a change.