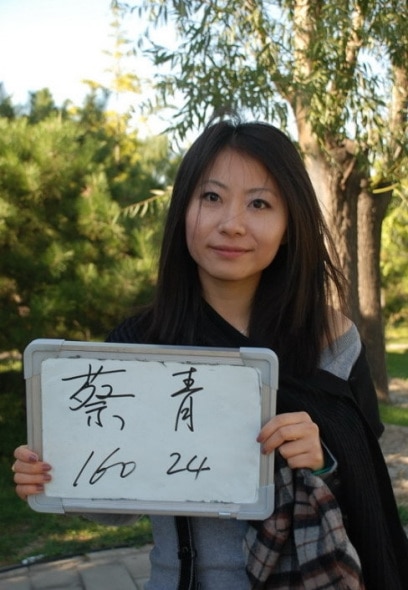 A friend of mine, Cai Qing, was recently in Chaoyang Park (Beijing) when she noticed a group was holding open auditions for a part in an upcoming Chinese movie. She’s not an actress by profession but thought it would be fun so recorded a couple of short introductory casting videos and went on her way. For most people, the story would end here but things took an intriguing twist…

In China, there is a phenomenon known as the Human Flesh Search Engine (人肉搜索), usually used by vigilantes, whereby the power of the masses and the internet are utilized to locate and often publicly humiliate individuals (for reasons including exposing government corruption, identifying hit and run drivers, and exposing “morality crimes”). These searches usually take the form of online lynch mobs researching and sharing information on forums and blogs. It has proven particularly effective and likewise controversial in a country where such group actions are frowned upon and borderline illegal.

Back to our story: After spending a week going through over five thousand applicants the director liked what he saw in Qing and tried to get in touch with her but because her phone had been stolen a few days earlier he was unsuccessful.

The Human Flesh Search Engine is also used to identify people seen in pictures so you can probably imagine where this story is going. After many failed attempts to contact the girl the director turned to Sina’s microblog service (Weibo), a Chinese clone of Twitter, and posted a message with some details and a picture of her (above). The post soon became very popular and five hours and a few false leads later the director successfully located Qing and arranged another audition (being held tomorrow)! You can read the full story in Chinese here.

It’s a fascinating story about the power of crowds in China and fingers crossed things work out for Qing but a somewhat scary reflection on a society where you may be one in a billion but have nowhere to hide. Stories similar to this also highlight the cracks in China’s internet content controls (aka the Great Firewall) where things move so fast that even the dark powers-that-be cannot be everywhere at once. Still, blocking the foreign competition and placing heavy restrictions with penalties on the local players is usually enough to do the job.