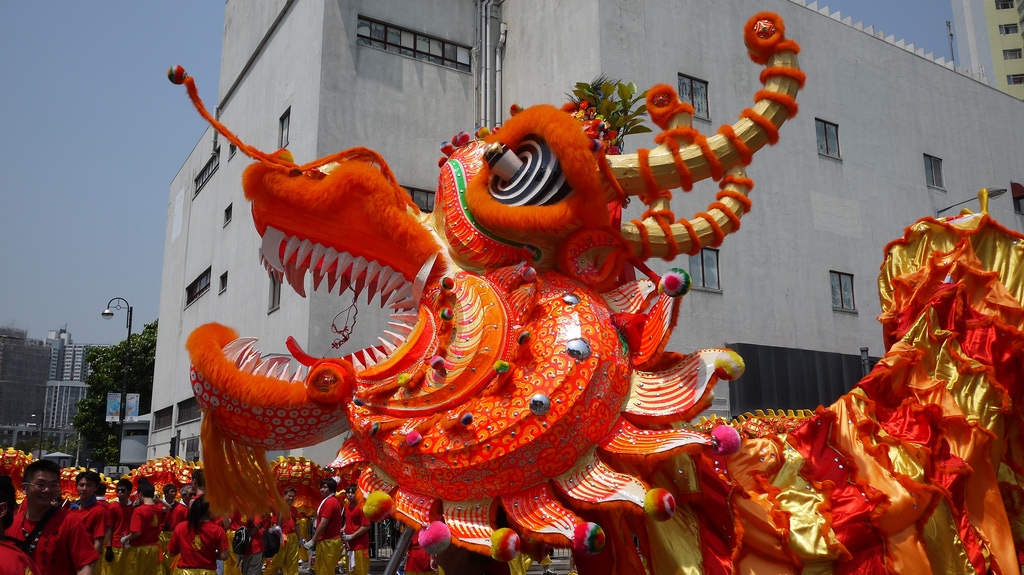 Every year in late April or early May, Hong Kong celebrates the birthday of Tin Hau (媽祖), also known as the Queen of Heaven and Goddess of the Sea. Legend has it that over 100 years ago Tin Hau stood on the shore guiding fishing boats home, unperturbed by typhoons and storms.

Nowadays she is celebrated as the protector of fishermen and sailors, with festivities held at Tin Hau temples all over Hong Kong. The most famous can be found in Yuen Long (元朗) town where a spectacular parade, consisting of teams from over 20 local villages and organisations, passes through the streets to the Tin Hau temple. This year it occurred on Easter Monday which is a holiday in Hong Kong so I went to check it out…

Performers, including lion dancers (舞獅), dragon dancers (舞龍), and other artists take part in a loud, colourful demonstration of traditional culture with thousands more lining the streets to watch and cheer. I shot the video above which hopefully gives you a good idea of the atmosphere.

The dragon itself is a long serpent-shaped body on poles, assembled by joining the series of hoops on each section and attaching the ornamental head and tail pieces at the ends.

Dragons can range in length from around 30 meters for the more acrobatic models, and up to 70 meters for the largest, parade and ceremonial styles, since part of the myth of the dragon is that the longer the creature, the more luck it will bring.

There were a lot of people with big expensive looking cameras running around trying to get the best shots which became a bit chaotic at times – I mostly stuck to the sidelines, not wanting to get hit by a stray dragon tail!

The dragon moves in a wave-like pattern achieved by the coordinated swinging of each section in succession. The patterns and tricks that are performed generally involve running into spiralled formations to make the dragon body turn and twist on itself. This causes performers to jump over or through the dragon’s body sections, adding to the visual display.

As well as dragons there were many floats carrying drummers and large banners or flags. Unlike carnival floats in the west, all of these were dragged along by hand which looked like a team sport in itself!

I’d seen a few lion dances performed on poles in mainland China before but never at street level or in combination with other actors like the ‘Big Head Buddha’ (大头佛) above whose role seemed to be to taunt the lions.

At the tail end of the procession teams of street cleaners followed to clear up the mess left by all the firecrackers and streamers.

At various locations performers would stop and take a rest from all the exertions – here some kids sit in the shade beneath their long dragon. It’s nice to see the traditions being passed down through the generations.

As well as animals there were people also dressed up in traditional costumes with heavy makeup.

I can only imagine how hot it must get inside of those costumes on a sunny day and how hard it must be to hear anything! Within the parade were people pushing carts full of bottled water for the performers.

Being the tail end of a lion isn’t so glamorous!

Many Southeast Asian migrants who live in the new territories were also taking part.

One of the best moments happened when two dragons met at an intersection and started jousting – the crowd went wild as people surged forward to watch the duel.

I’m not sure if either dragon ‘won’ but it was a cool moment, save for the sea of cameras (mine included).

Some of the banners were enormous and took two or three people to carry/control – luckily it wasn’t a windy day.

Barriers were set up along the streets for people to watch from – it was extremely crowded, with some even taking to the roofs of nearby buildings to get a better view.

Another highlight near the end was a huge orange and golden dragon which careered down the street at a frightening pace.

Each dragon had a leader who walked in front with a ball on a pole which he used to direct it (I’m not sure if there’s a technical name for this?).

One hazard for the tall floats were low-hanging power lines – this group had to use a pole to untangle theirs before limbering underneath.

The walk to the temple takes over two hours in total and everyone looked exhausted towards the end.

Just as I was leaving I noticed some people carrying a full roast pig on a small card, presumably as an offering – looked tasty!

This is definitely one event I’ll be marking on my calendar for next year – not to be missed if you’re in Hong Kong.