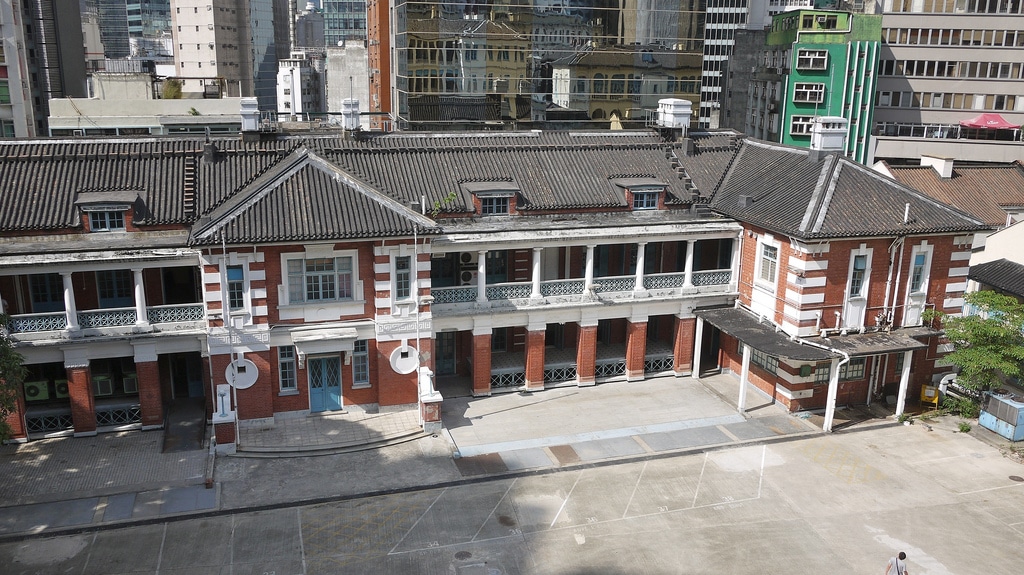 Whilst walking down Hollywood Road yesterday I noticed that the old decommissioned Central Police Station compound was playing host to a free art exhibition providing a unique opportunity to take a look inside one of Hong Kong’s oldest colonial relics.

Dating from 1841, the Central Police Station (CPS) compound has a fascinating 150-year history. Located in the heart of Hong Kong alongside Victoria Prison and the former Central Magistracy the site contains numerous buildings of historic value but has been inaccessible to the public since 2006 when it was decommissioned from active use.

Even though the interior has been stripped of much of its original furnishings the vestiges of its former use are still clearly visible. The map above shows the different police district divisions on Hong Kong Island.

Architecturally the CPS was built mainly in a Victorian / Edwardian Colonial style and the buildings are the only surviving group of late-19th Century buildings in the city centre. They were declared monuments of Hong Kong in 1995 because of their historical significance.

From within the central courtyard, the compound is surrounded by modern skyscrapers which have sprung up around it as the city developed, leaving a strangely quiet void in an otherwise vibrant quarter of the city.

I’d often walked past this doorway from the street on the other side so it was great to finally be able to have a poke around inside.

Behind the police headquarters lies the three-story barracks block, built with proportions in the Golden ratio, and is the oldest structure within the CPS. While the basic design of the building is western in nature, it contains elements of local design, such as wooden louvres, and balconies adapted to Hong Kong’s hot climate.

At this point, there was apparently a sign saying no admittance but I somehow missed it 😉

Walking up the stairs the extent to which the passage of time and the elements of nature were taking their effect on the building became more obvious.

Peeling walls, broken windows, and creaking floorboards made for a rather eery unsettling environment.

Coils of barbed wire lined every conceivable means of escape with each section being divided by heavy doors – many of which had been left open.

The division between the police station and prison was heavily guarded by a 20 ft high razor wire-topped fence which would be almost impossible to scale. Bridges on multiple levels provided secure access between the two buildings.

I was hoping to be able to get into the prison itself to see some of the cells but sadly access was well and truly sealed off.

The staff canteen area was flooded with yellow light through tinted windows. The masked cross on the window reminded me of something from The X Files – had it been a sign to somebody on the outside or was it just holding the broken frame together?!

A lonely painting of junk boats sailing in Victoria Harbor hangs on a cracked wall.

By today’s prices, the food here was extremely cheap…

Although conditions in the kitchen were not so favourable!

I felt a little uneasy walking up the concrete stairs as some had huge chunks missing.

Inside the barracks, there were many services for the police officers including a barber shop and even a bar!

A few items left behind, covered in years of dust, provided an idea of how things once were.

The compound will face reconstruction in the near future since the government intends to convert it into a modern food plaza, museum and art gallery. While the plan is to conserve the historical buildings it’ll be interesting to see how much of its original character it will maintain. Perhaps we’ll soon be seeing the first Starbucks built in a prison!

Looking out over the perimeter walls you can clearly see how dense the area is. The nearby SoHo district is packed with expensive restaurants and bars – must have been quite gauging for prisoners back in the day!

The main police headquarters building seems to be in better shape than the rest of the structures and it is where the art exhibition was being held (it wasn’t particularly interesting).

In some rooms the floors looked like they had or were in imminent danger of collapse – luckily there were warning signs.

In the corner of one room, I noticed a curious whiteboard leaning against the wall.

Written on it seemed to be the names of people who had died in various incidents and the number/type of licensed premises in the area (including those with arms apparently!).

On closer inspection, I discovered that the whiteboard was concealing a hidden door behind it which led to a concrete bridge going to another building.

I had hoped that the bridge might lead to the prison but instead, it went to the Central Magistracy which was in a terrible state of disrepair with water leaking all over the floors inside. It looked pretty dangerous so I didn’t venture any further but was very pleased to have been able to take a peek at this important piece of Hong Kong’s history before it’s redeveloped.