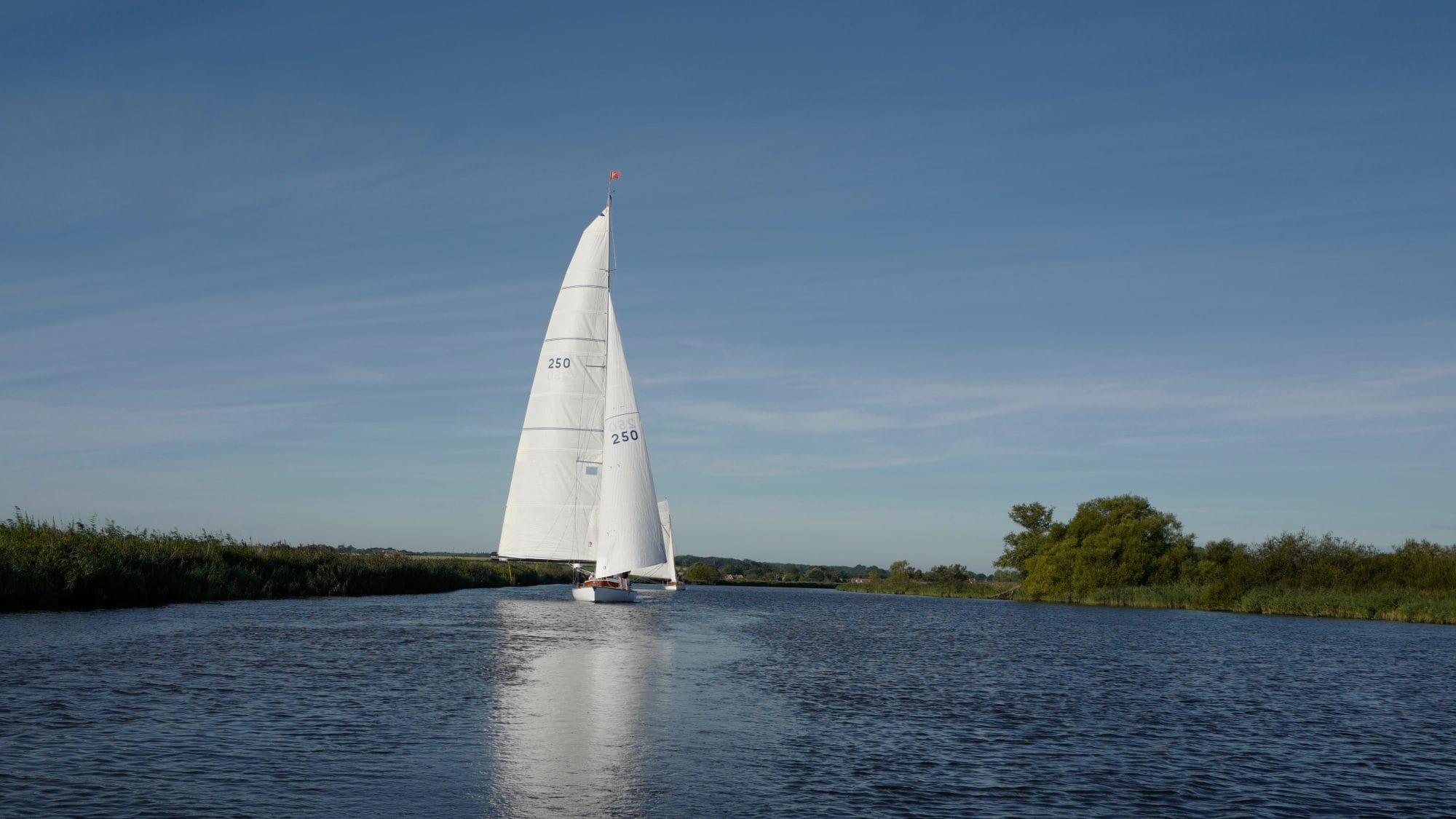 I’ve written before about the Yare Navigation Race, which takes place each year on the River Yare in Norfolk, but had never taken part despite my parents having a share in a boat there.

This year I was able to return home on the race weekend in September. After landing in the UK from Hong Kong the night before, I caught a few hours sleep before it was time to rise at 6 am. Luckily jet-lag was working in my favour.

The ~30-mile race begins from Coldham Hall where there is a pub next to the sailing club. By the light of dawn, my father, his friend and I got the boat set up and raised the sails.

I grew up sailing during summer holidays on The Broads so, although I haven’t sailed in some years, everything felt quite familiar. My job was to control the jib (the sail at the front).

You can read more about how the race works in my previous post, but in essence each boat chooses its start time at 15 minute intervals, with the aim of making the half-way turning point at the same time the tide turns. If you get this right you have the current running in your direction of travel both ways up and down the river.

35 yachts took part this year and, since our 20ft boat Nirvana (No. 141) is in the smallest class (and hence slower), we choose to start early at 7 am.

There wasn’t much wind in the early morning, so our race began with the sound of a claxon as we gentle glided over the glassy start line with nobody but the race adjudicators watching.

After about an hour of gentle sailing, the wind began to pick up and things became a little more exciting. We could see the sails of other boats gaining from the rear.

Larger boats with taller rigs have the advantage of being able to pass through tree-lined sections without loosing as much wind as smaller ones like ours.

Though we were being overtaken throughout the day, it was still a pleasure to watch them in action. It requires quite a bit of skill to pilot a ~40ft yacht through some of the narrower stretches of the river.

We reached Breydon Water near Great Yarmouth at around 10.40am which is where the turning marker buoy is placed each year.

The sheltered estuary here is at the gateway to The Broads river system and safe passage for boats is indicated by red and green marker posts.

At Reedham (not pictured) there is a Victorian railway swing bridge which is impassable to yachts when shut. Boats are timed out while passing this section to minimise time loss.

The weather turned out to be perfect in the end, with a good amount of wind and a picture-perfect sky. The only thing there wasn’t much of was time to eat our packed lunched!

Many of the wooden hulled boats are over a 100 years old and requite a lot of attention during the winter months to keep them floating.

While we were close-hauled on the way up, we needed to tack into the wind on the way back (i.e. zig-zagging across the river). This made things more interesting with larger boats crossing our path as we did so, leading to some pretty close calls.

It was a beautiful sight to see all the classic boats criss-crossing their way down the river.

We arrived back at Coldham Hall at around 4.50pm. Our time was a respectable 5h 37m 17s which would have placed us third out of ten in our class had we a handicap. Breeze (No. 177) finished first overall with a time of 4h 53m 53s.

Update (03/2019): Someone was flying a drone while we were racing and put together a beautiful video showing aerial views of the Broads. You can see Nirvana at 2:56: