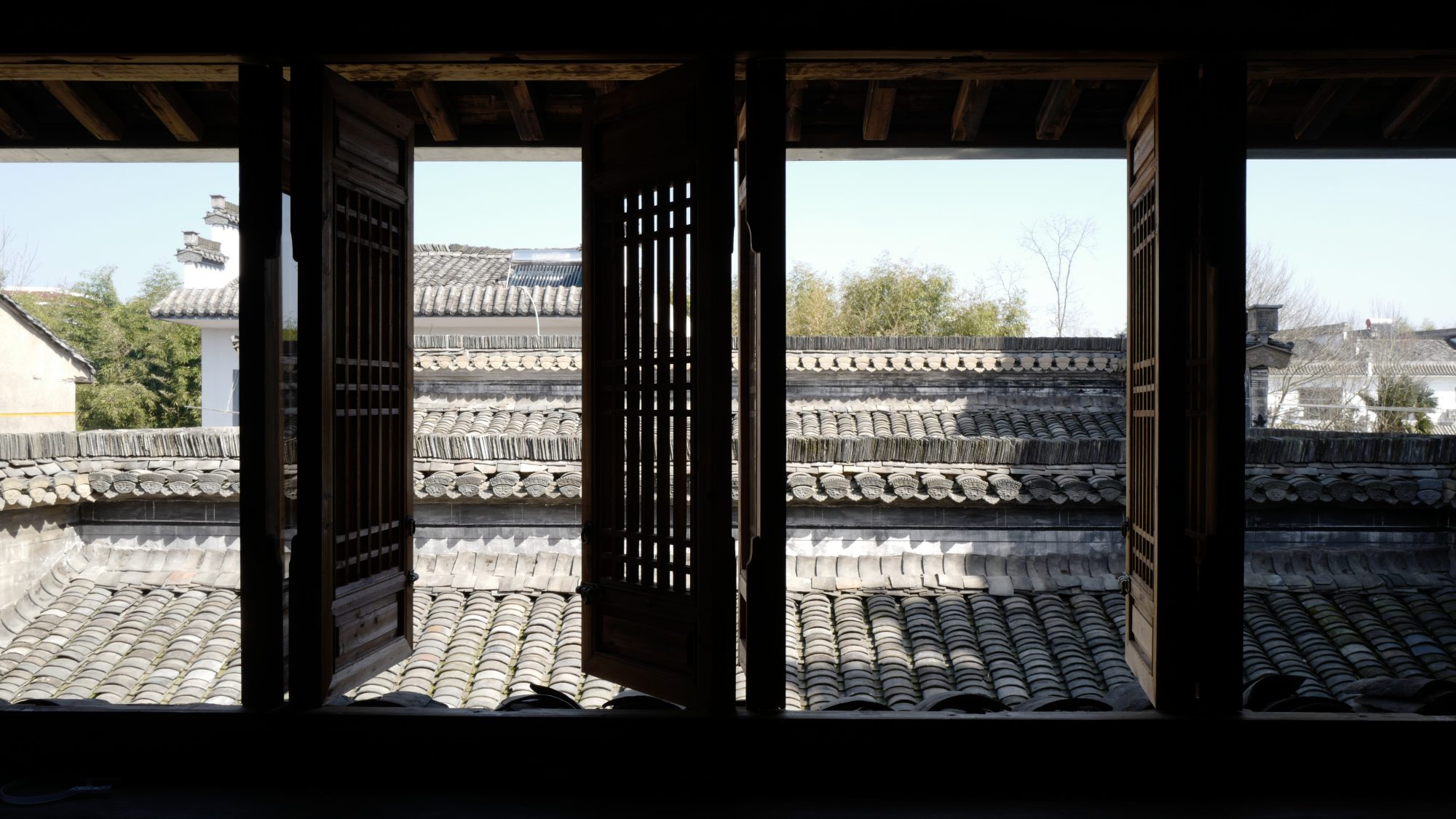 Having explored Huizhou and Yuliang on our first day in Anhui, we woke bright and early the next day with the intent of cycling to some small villages in the surrounding area.

Breakfast was the first order of the day and we found a small place serving tasty wonton, hot soy milk and pancakes stuffed with vegetables and pork (徽州挞粿). Batteries recharged, we borrowed two bicycles from our guesthouse which turned out to be racing bikes that were not designed for comfort!

Wobbling out of Huizhou along busy roads full of impatient drivers was not quite the relaxing cycle in the countryside we had imagined but once we got going we were committed.

Two and a half hours and two very sore backsides later, we made it to XiXi South Town (西溪南村) which is accessed via a narrow stone bridge over a shallow river.

We were somewhat dismayed to find a large billboard at the perimeter proclaiming the town “development plan” with works underway to improve facilities for tourists. In China, this often means tearing everything down and rebuilding a simulacrum of what was once there. While some of the streets have been re-laid, luckily everything else seemed fairly intact for the time being.

Walking through the narrow lanes we passed by many old single storied stone buildings with tiled roofs, surrounded by small fields and the odd hen pecking away in the front garden.

Along one of the backstreets, we found a narrow stream running in a cut beside the cobblestones which a local told us was built by the Japanese during the occupation.

We came across a magnificent pool reflecting the tall whitewashed walls of a neighbouring residence. The water was originally stored here for use in case of fire.

Compounds like these were built by Huizhou merchants who returned home after making their fortune. They usually contain multiple halls with a central courtyard. Their interiors are far more extravagant than the exteriors to avoid looking overly ostentatious which might attract unwanted attention.

Passing by another large residence, we met a local family who was renovating their ancestral home to turn it into a guesthouse. They were kind enough to invite us inside to take a look around.

The ground floor has a reception area at the front, a large hall at the centre with a sky well in the roof and a garden area outside at the back. They have wooden traditional furniture, some of it original and some newer reconstructions.

Latticed windows in the bedrooms, above the hall, provide striking views out over the grey tiled rooftops. A quintessential view of old China if ever there was one.

We got chatting with the family and they invited us to have lunch with them since there weren’t any restaurants nearby. The home cooked hot pot was delicious.

Afterwards, we played cards in the garden and played with their extremely cute puppy who was still finding his feet while avoiding a much larger and very aggressive dog which was chained in the corner. Let’s hope those two never meet!

After saying goodbye to the nice family we got back on our bikes and continued. More in the next post.