Today I bring you a world first… possibly… Whilst travelling on the London to Newcastle train on my way up to Durham today I opened up my PowerBook and was immediately greeted with a connection to the ‘train’ Wireless Access Point (WAP). Cool I thought, net access on a train! Unfortunately my glee was short lived when it turned out you had to pay £2.95 for just 30 mins of access! I decided to pass on this but that didn’t stop me having a snoop around, the process of which I will call ‘WarTraining’ in homage to ‘WarDriving‘!! 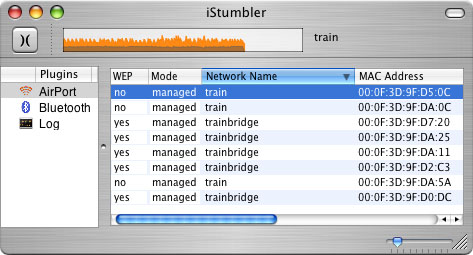 First I fired up iStumbler (an excellent WiFi scanner) and was shown a list of over 16 WAP’s – it appears they’ve installed a couple in each carriage for complete coverage. It even showed a couple of peoples personal laptops that should know better (yes, that’s you Mr. Stevenson!). I then ran a quick Nmap scan of the complete IP space to which I connected. This showed nothing of interest unfortunately and confirmed that the setup is pretty secure. Once connected the only thing you could access without paying was the GNER website which provided and explanation of how the system worked: Basically it uses a combination of satellite and cellular phone links to provide a pretty-much uninterrupted service – what happens when you go through a tunnel I don’t know! One cool little feature on the web page was a map that showed the exact position of the train, presumably via some sort of GPS device so you always know where you are (in case you forgot perhaps?!). The whole thing is a neat idea but at the cost they’re currently providing it at currently I can’t see it catching on with anyone other than well-off businessmen.

When I switched over to Bluetooth scanning the security situation was much worse. I picked up a number of unprotected phones from which I could have stolen their files and address book or even used it to dial any number if I had made the connection. My advice if you’ve got a Bluetooth enabled phone is to turn it off!