After the initial glitches Apple had with their iPhone 3G launch and 2.0 software update launch last Friday settled down I was pleasantly surprised to find that, aside from all the new features, there are some pretty useful 3rd party applications already available and even better many are free. 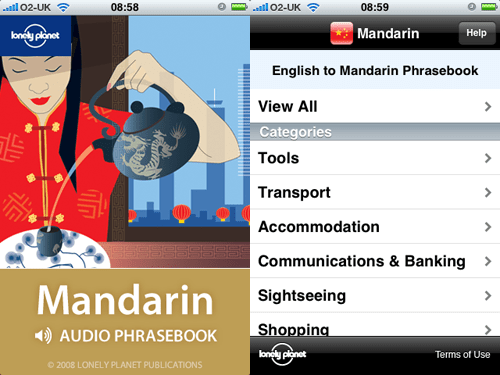 One which particularly caught my eye is the Mandarin Audio Phrasebook made by Lonely Planet. While I usually take a phrasebook when I’m going somewhere I don’t speak the language to be honest I rarely use it. The problem I have with paper phrase books is that its a pain to find what you want quickly which is the majority of situations when you need it. This application goes some way to solving the issue by providing easily navigable contextual menus structured by helpful subjects like Transport, Accommodation, Food & Drink and so on which lead to searchable lists of useful phrases. 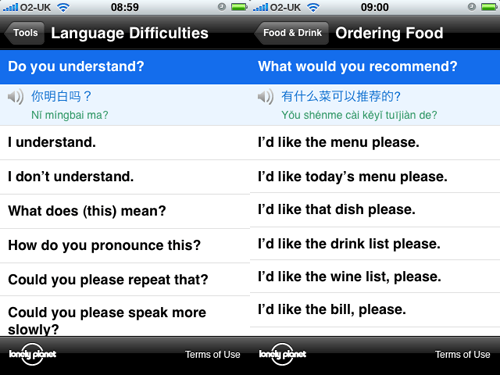 Each phrase includes an audio clip of it being spoken as well as the written form in both Chinese characters and the Pinyin (romanised) alternative. Now instead of having to flick through a paper based book looking for the right phrase you can very quickly find what you need to play it back or show whoever you need to communicate with. One cool enhancement would be to integrate this with something like Google Translate so you could get real-time translation of anything.

I’m looking forward to testing this in the field and hopefully brushing up on my very limited Mandarin!

Lonely Planet also have other phrasebooks available for the iPhone in a multitude of different languages, each priced at a reasonable £5.99.

P.s. if anyone’s interested in how I took screenshots above on an iPhone just hold the home button and press sleep – the screen will flash white for a moment and send the picture to your camera roll.