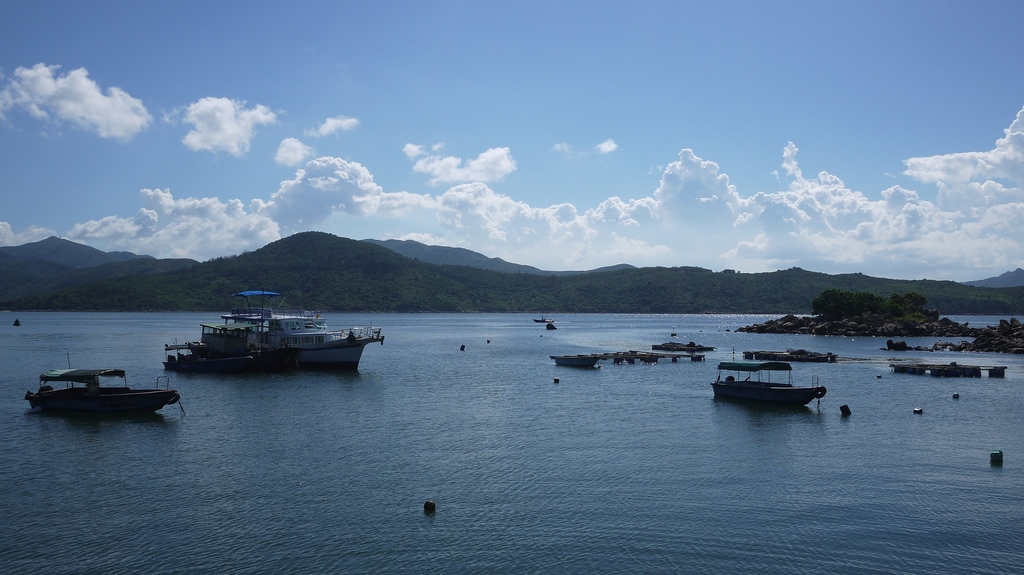 The amazing thing about living in Hong Kong is that you’re never more than 30-40 minutes away from beautiful mountain scenery and pristine beaches despite most people living the highly dense urban center in the south. One place many friends had recommended to me was the coastal district of Sai Kung (西貢區), on the northeastern side of the territory and a couple of weekends ago a visited a small island not far away.

Having taken the #96R bus from Diamond Hill MTR station we got off at Wong Shek Pier (黃石碼頭) and hopped on a ferry to Grass Island or Tap Mun (塔門), about 15 minutes away. Just the boat trip itself was wonderful on a lazy Sunday afternoon.

Arriving at the small harbour there are a smattering of houses along the coastal front.

The villagers are mostly farmers, merchants and fishermen.

If you miss the official ferry there are alternative ‘unlicensed’ boats to get you back to the mainland – haggling required!

Whilst at its peak there were around 2,000 residents, today many have moved to live in the city centre and only about 100 remain. Most run small stores or restaurants for local tourists visiting the island. Try the ‘ice-less’ ice-cold milk tea which is pretty good.

As with all coastal areas there is an obligatory Tin Hau temple to protect sailors from the elements.

There are some nice older buildings in the village, although many seem abandoned and in a state of disrepair.

The island is so small that you can get glimpses of the sea from pretty much everywhere.

After the huge typhoon of the previous week, the weather was pretty much perfect.

I’m not sure if this house was under restoration or had just fallen apart from old age but it had certainly seen better days.

“For all tourists, please follow our local convention that it is not allowed to throw any rocks into the sea.“

Quite a few trees had been blown down by Typhoon Vicente which was category T10 (the strongest level).

While walking up the hill we came across the old King Lam School (瓊林學校) which closed in 2003 due to the declining population.

We sneaked inside the Grade III historic building that was built in 1957 to have a look around.

Inside ageing photos on the wall provided ghostly reminders of the former students and their foreign teachers.

The basketball court is rapidly being overgrown.

Likewise, desks and chairs were rotting away like something out of a post-apocalyptic movie.

Back in the land of the living, the gentle hilltops provide the perfect place to sit and enjoy the view.

Grass Island living up to its name… It’s also a popular spot to camp which I hope to try before the end of the year.

Enough blue sky to make a sailor a pair of trousers… or fly a kite!

The top of the hill provides a panoramic view and you’ll likely notice your phone switch to a mainland China provider since the border with Shenzhen is not far away.

Down on the pebble beach, there seemed to be a lot of washed-up rubbish lying around but still nice enough for a swim.

Be warned there are many feral cattle wandering around but they all seemed pretty tame.

If you’re looking for a quiet day trip away from the crowds then Tap Mun might be the perfect place.