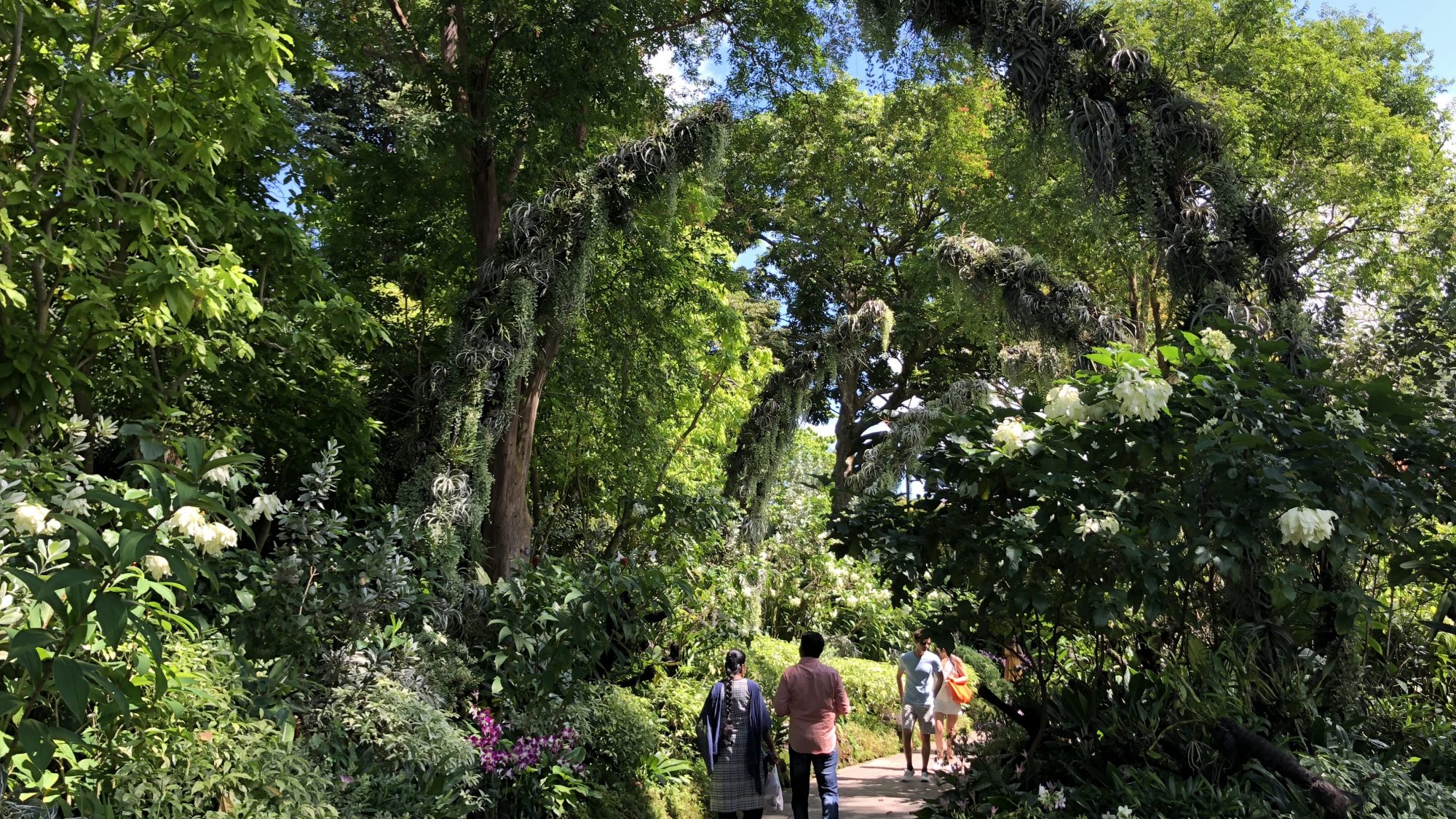 Back last year, when we were still allowed outdoors, I spent a few very enjoyable days in Singapore. Politics aside, it’s an impressive city-state which brings together a multitude of cultures in a futuristic metropolis within a tropical rainforest climate.

We stayed in an old shophouse near Little India which would originally have had businesses on the ground floor but has now been turned into private residences. The covered walkways provide some respite from the intense heat and frequent rain.

Singapore is famous for its hawker centres which were originally created as sanitary alternatives to street carts and today are beloved for the variety of inexpensive food they sell. We visited Tiong Bahru Market and thoroughly enjoyed sampling a wide range of dishes and cold drinks.

Although Singapore has lost 95% of its historical forests, it still feels like a city nestled within a jungle and the luscious greenery sets it apart from cities in more temperate climates.

In 1967 the government introduced the vision of making Singapore a “garden city”[237] aiming to soften the harshness of urbanisation and improve the quality of life.

I would highly recommend a visit to the Asian Civilisations Museum opposite Boat Quay. The museum specialises in the material history of China, Southeast Asia, South Asia and West Asia, from which the diverse ethnic groups of Singapore trace their ancestry. Nearby the National Gallery Singapore is also fantastic.

In the evening we sat on the terrace of a restaurant along Boat Quay and watched rehearsals for Singapore’s National Day, complete with fireworks over the Marina Bay Sands resort.

The Singapore Botanic Gardens were a real feast for the senses and a real highlight of the trip. We spent most of our time in the National Orchid Garden which contains 60,000 orchid plants – consisting of 1000 species and more than 2,000 hybrids – in the three hectares of carefully landscaped slopes.

The raised boardwalk within the Learning Forest was especially appreciated since my wife was in a wheelchair at the time.

Gardens by the Bay

The Gardens by the Bay is the flashier more touristy cousin of the botanic gardens adjacent to Maria Bay Sands. Within the park are two cooled conservatories – the Flower Dome and the Cloud Forest (pictured below). Both are huge and the Flower Dome is the world’s largest columnless glasshouse.

For my money, the Cloud Forest is the more interesting and impressive of the two. It replicates the cool moist conditions found in tropical mountain regions between 1,000 and 3,000 metres above sea level. It features a 42-metre “Cloud Mountain” structure completely clad in epiphytes such as orchids and ferns.

After taking an elevator to the top, a suspended walkway winds its way back down around the mountain.

Since we were tired, we ended up leaving without seeing the Supertree Grove lit up at night which was a shame but to be honest we were happy to escape the crowds.

Surprisingly, the pièce de résistance of the trip ended up being the airport. Opened in 2019, the Jewel is a nature-themed entertainment and retail complex which features at its centre the world’s tallest indoor waterfall, the Rain Vortex, surrounded by a terraced forest. It’s truly jaw-dropping.

A funnel at the bottom prevents splashing and insulates the sound of the cascade. The toroid-shaped roof has more than 9,000 pieces of glass with a sloped oculus as the mouth of the waterfall acting as “a continuation of the building…completed in a liquid form”.

The airport itself was equally as impressive; sparkling clean, efficient, with great food options. I had forgotten to post my postcards and a member of staff was kind enough take them for me!

I hope I’ll be able to return to Singapore and dig a little deeper in the future ??