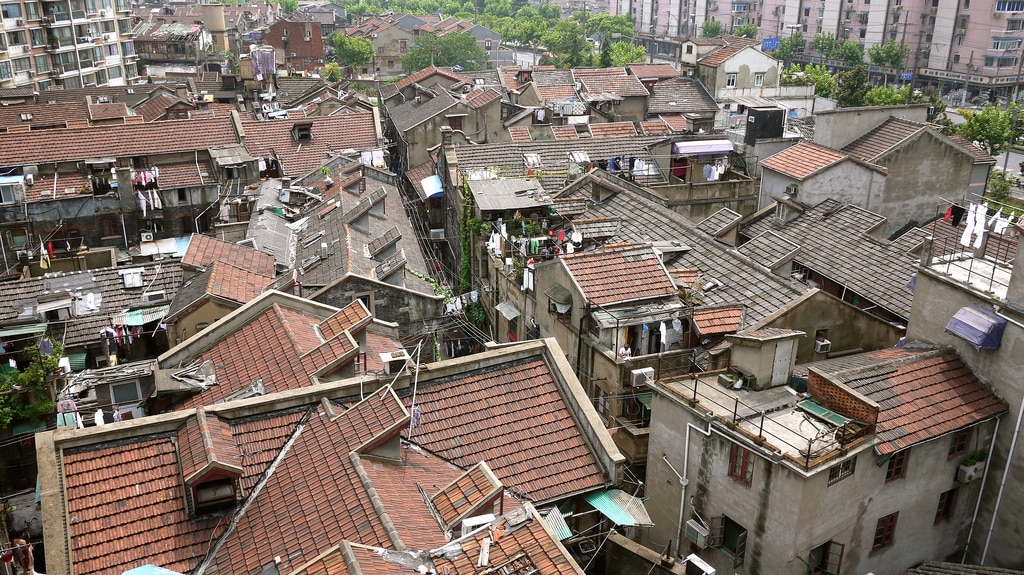 While Beijing may be famous for its traditional Hutong (胡同) courtyard residences, Shanghai has its own distinct architectural style of residential homes called Shikumen (石库门). During a recent trip to 1933 Shanghai I spied from its roof one of the few remaining Shikumen tenements and decided to take a look around…

Shikumen literally means “stone gate” in reference to the stone archways that stand at the end of each alleyway, known as a nòng-tang (弄堂). From above the deep ravines between the tightly clustered two or three-story houses sharply stand out in contrast to the more modern developments which surround it.

Shikumen emerged in the 1860s and were a byproduct of both Chinese and Western sensibilities, being similar in design to Anglo-American terraces or townhouses, but distinguished by heavy red brick walls protecting an inner courtyard from looting and burglars (rife during the Taiping rebellion).

With the exception of electricity and air conditioning little has changed about these traditional residences which are inhabited by a community of mostly older locals who have probably been there most of their lives. Facilities are basic by today’s standards meaning that younger generations have left to live in more modern apartments.

The few remaining children to be seen are being looked after by their grandparents as is still the tradition in China for families where both parents usually work. Conditions are cramped but not unsanitary.

While most of the buildings are in a state of considerable decay, lines of washing hung high between buildings down each alley make the area feel far more alive than most of the stale generic high-rise apartments which the majority of Shanghainese live in today.

While living standards may have risen dramatically over the past 30 years for many in China, you can’t help but feel the sense of community a place like this created has been lost. Knowing your neighbours has become something of a rarity.

One of the things I liked the most was the amount of vegetation which was growing freely within the streets. Unlike other places in China, the inhabitants were clearly taking some pride in keeping the area clean despite its age.

At their height of popularity over 60% of Shanghai’s housing stock consisted of Shikumen-style residences, but today those which survive are rapidly being demolished or turned into fashionable restaurants, bars, and boutiques like in Xintiandi (新天地) and Taikang Lu (泰康路) which I visited last year.

Both outcomes displace the original residents which is a great shame but seemingly unavoidable.

I would love to have been able to meet the owners and hear their stories but I had already invaded their privacy enough and sadly the language barrier would have prevented this. In such a tight-knit community anyone wandering around with a camera tends to stick out!

This particular Shikumen is known as Hongfu Li (洪福里) and can be found on Wuzhou Road (behind 1933 Shanghai). Go visit it soon as with all the encroaching development I fear it may not survive much longer. Below is a short video I took wandering through one of the alleyways: