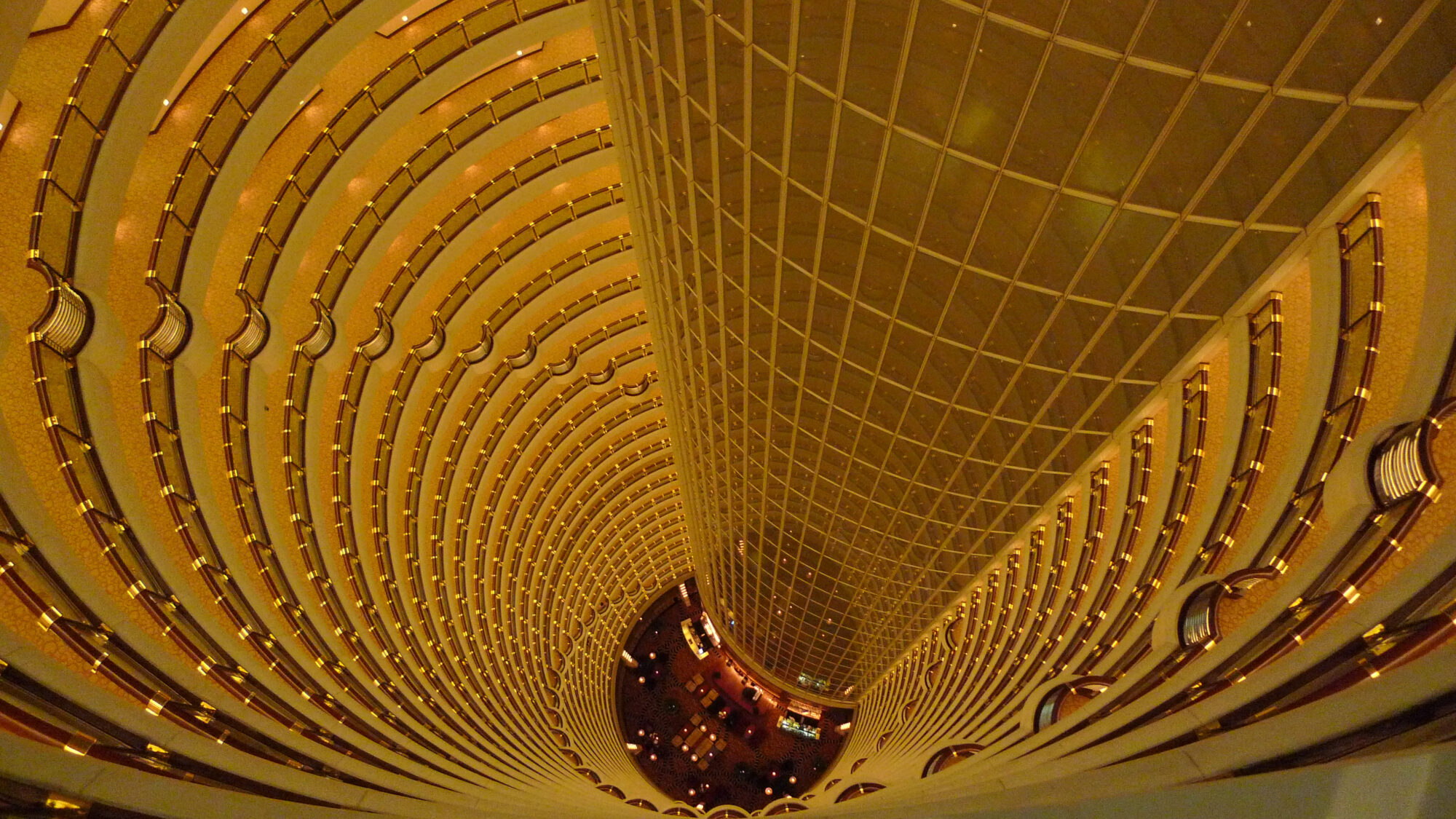 Shanghai is well known for its dizzying array of skyscrapers with their unique facades and styles but rarely do most people look beyond the exterior shell which can sometimes be just as intriguing on the inside as they are on the outside. Such is the case with the imposing Jinmao Tower which at 421 m high makes it the fifth tallest in the world currently (as well as looking like something out of a batman movie!). Inside the monstrous building, the Shanghai Grand Hyatt hotel occupies floors 53 to 87 and therein contains the hidden gem I was here to find…

The hotel is obviously only open to paying guests which, being a man of modest means, I was not. Much against the protestations of my Chinese friend (who was sure we “definitely shouldn’t be here”) I casually wandered into the building and then took the super-fast lift up to the lobby on the 54th floor at a blistering 9.1 meters per second. Feeling a bit like a con-man at this point I asked one of the staff how to get to the 87th floor where we were “meeting friends” and was politely directed to the secondary lifts. This then whisked us up to the top floor which presented the purpose of this little detour; an awe-inspiring barrel-vaulted atrium lined with 28 annular corridors and staircases arrayed in a spiral.

Peering over the edge of the balustrade from the 87th floor down to the 54th was rather unnerving and exhilarating at the same time probably due to the subtle spiral effect which makes you feel as if you’re being sucked into the vortex (you can get a better feel for it by seeing the larger photos). I clung onto my camera tightly fearing that if I dropped it might just kill someone below! Not for the faint of heart!

Whilst from a purely functional perspective it’s a huge waste of space it’s aesthetically very beautiful and literally a centrepiece for the hotel (as well as a good setting for a 007 action scene I’d say!). Iconic design is often lacking in China and even though this can’t be considered Chinese design per-say I’d still say it was one of the best things I saw in Shanghai in terms of its modern side. Hotels are dull places at the best of times but this is pretty cool.

One day, assuming the economic meltdown doesn’t ruin us all, I’ll have to check in for real!