As a general observation, much of the best graphic design seems to be coming out of Japan these days. Maybe it just looks fresh to us because we’re not used to it but it seems to have a certain edge which is lacking in the West (purely my own rather uninformed opinion!).

The Nagaoka Institute of Design is a good point in question where a quick browse will show you some pretty cool stuff. Be sure to take a look at the Collection 2005 Gallery where the flash interface is as radical as some of its content. 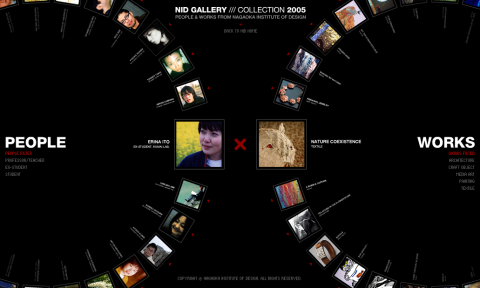 Seriously nifty if you ask me – good visualisation in action, simple but very effective (as well as being quite fun!). It was created by Yugo Nakamura from yugop.com which also features some pretty far out content! Worth a click or three.

If you haven’t already seen the new ‘Star Wars Episode III: Revenge of the Sith’ trailer download it here (52MB, while it’s still available!). Looks great but as we all know trailers can be deceptive. Incidentally, this will be the first Star Wars film to get a rating higher than PG (it will probably be a 12 in the UK, PG-13 in the US) as it “is much more dark… more emotional. It’s much more of a tragedy” according to Lucas.