Been feeling a bit under the weather today with a cold but nothing too debilitating thank goodness. Saw ‘Alien Vs. Predator‘ last night and as expected it was terrible. Not only have they totally destroyed the mythology behind the success of the original films but they have also managed to make something that isn’t the least bit scary. The story is at best laughable and the acting even worse to the extent that you don’t care each time a character gets killed off. This coupled with some pathetic pseudo-science makes for a waste of 101 minutes of your life. Unless they bring back Sigourney Weaver this is one franchise that should be put to sleep.

Perhaps they would have done better with this guy in a leading role, he certainly knows how to handle armaments a lot better: 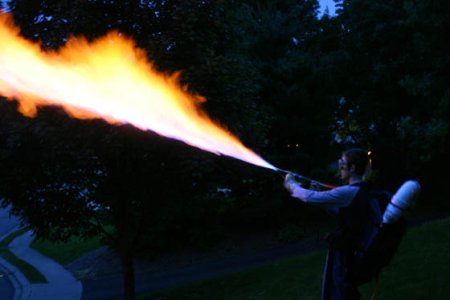 It’s great to know that you can pop off to your local DIY store and easily buy all the parts necessary to build your own fully-functional flamethrower like the guy above has done who apparently “laugh[s] in the face of hypersonic shards of plastic puncturing your spleen”. Sounds nice. If you see this man walking down your street with a grin on his face I would run away very fast – this thing has a range of over 20 meters! I would post a link to the build instructions but I wouldn’t want to give my younger readers any ideas 😉

With less than one day left until the US presidential election I thought I might post my predictions on what will happen tomorrow: Kerry will win but by such a small margin that the Bush camp lawyers will go berserk and start months of legal turmoil again, so much so that the US electoral system will have to be radically altered. You heard it here first on the only ‘impartial’ news service worth listening to!!! What amazes me most is that here in England we seem to be paying more attention to foreign politics than to our own at the moment – watch out Tony Blair, we’ll be coming after you next!