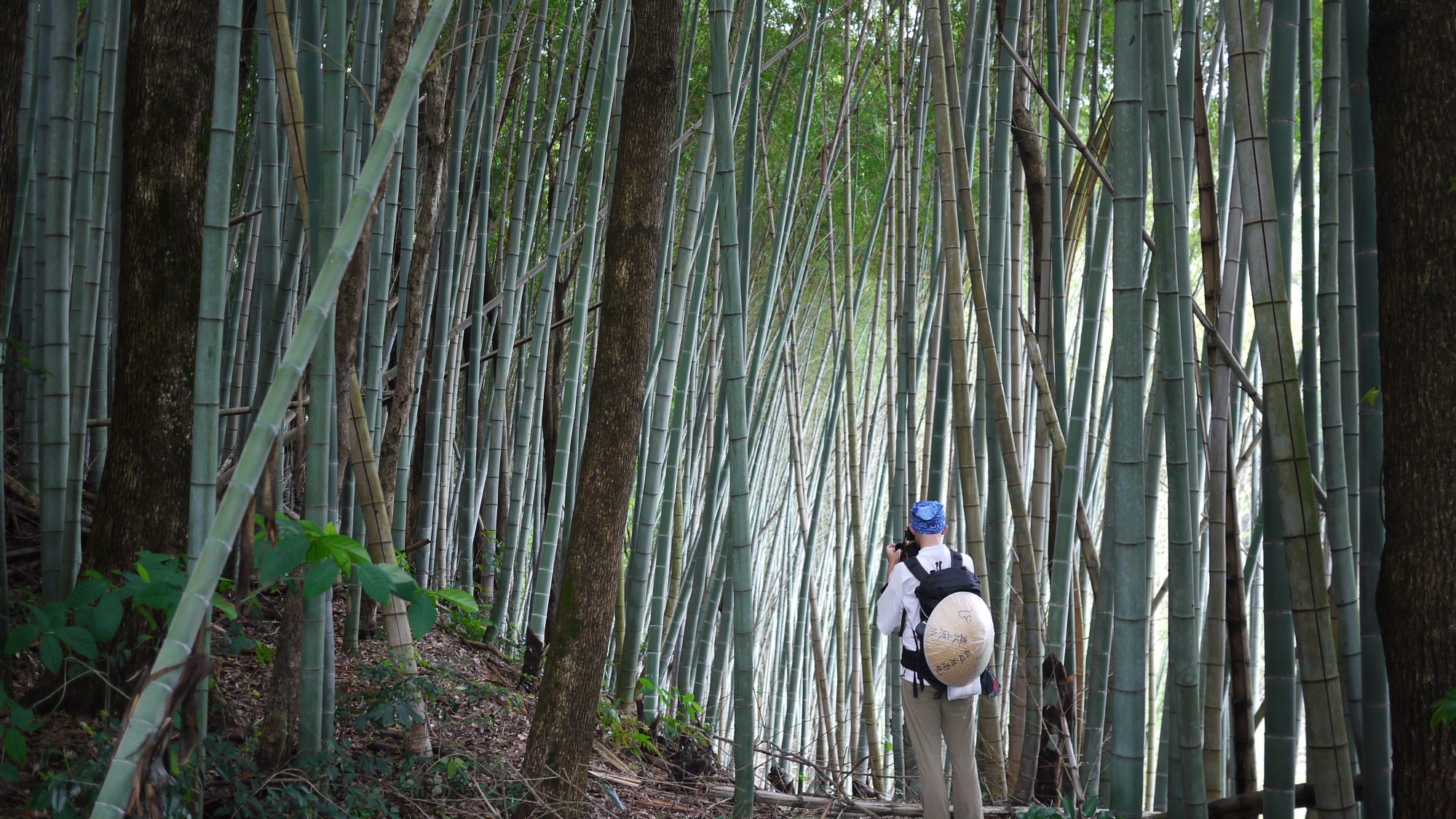 Unlike Kochi Prefecture, the temples in Ehime are far closer together and today we visited four in quick succession. Luckily the weather remained dry and there was even a smattering of sun! 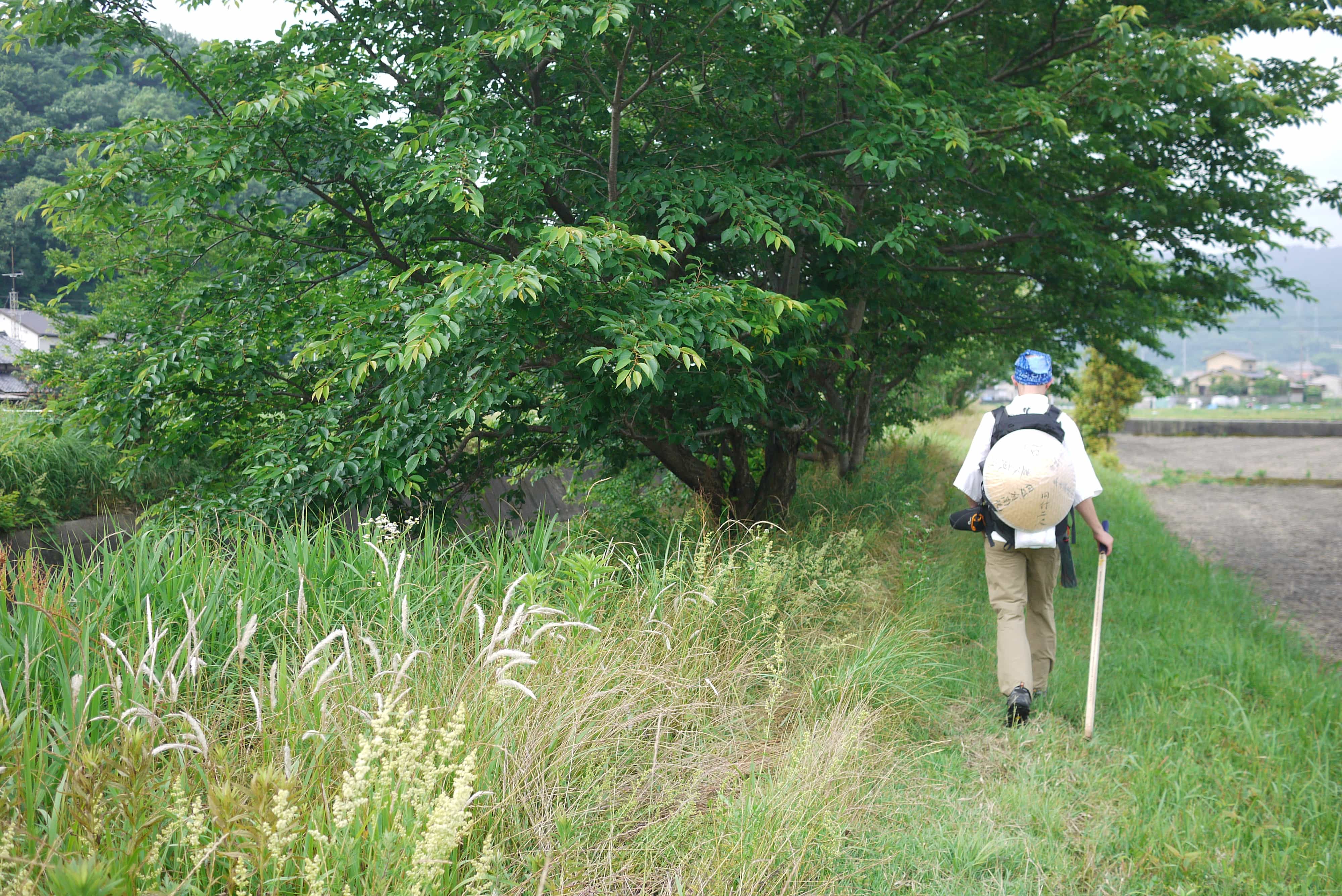 After a surprisingly good Business Hotel breakfast (jam on toast, cereal, sausages) we head south from Imabari Station, hitting Taisan-ji (泰山寺 – 56), Eifuku-ji (栄福寺 – 57), and Senyū-ji (仙遊寺 – 58) which are all about 3km apart. 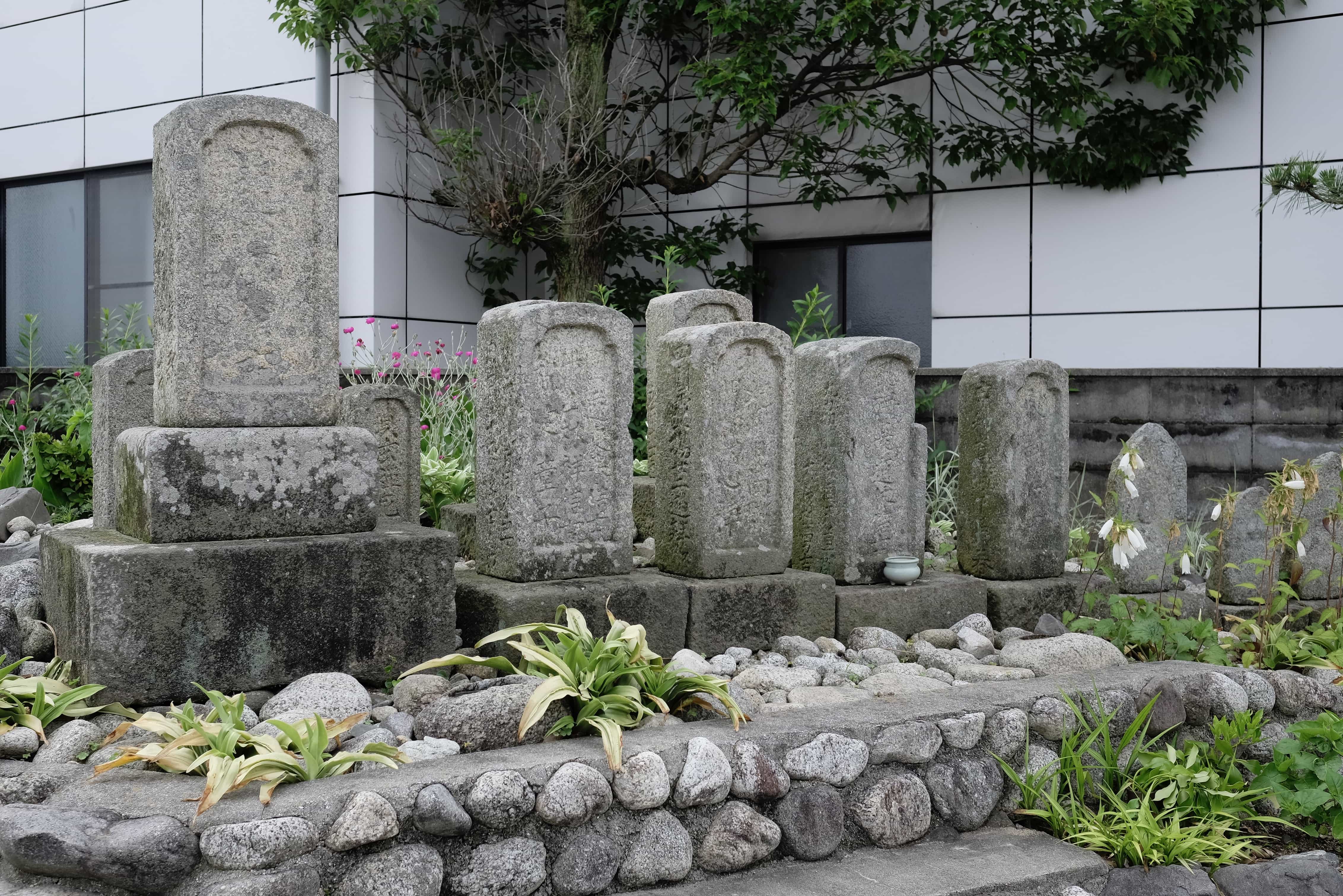 On the way to Eifuku-ji we came across a monument to henro who have died on the trail (this was not uncommon in the past). The white hakui shirt that we wear was considered a death shroud, symbolising that the pilgrim was prepared to die at any time. 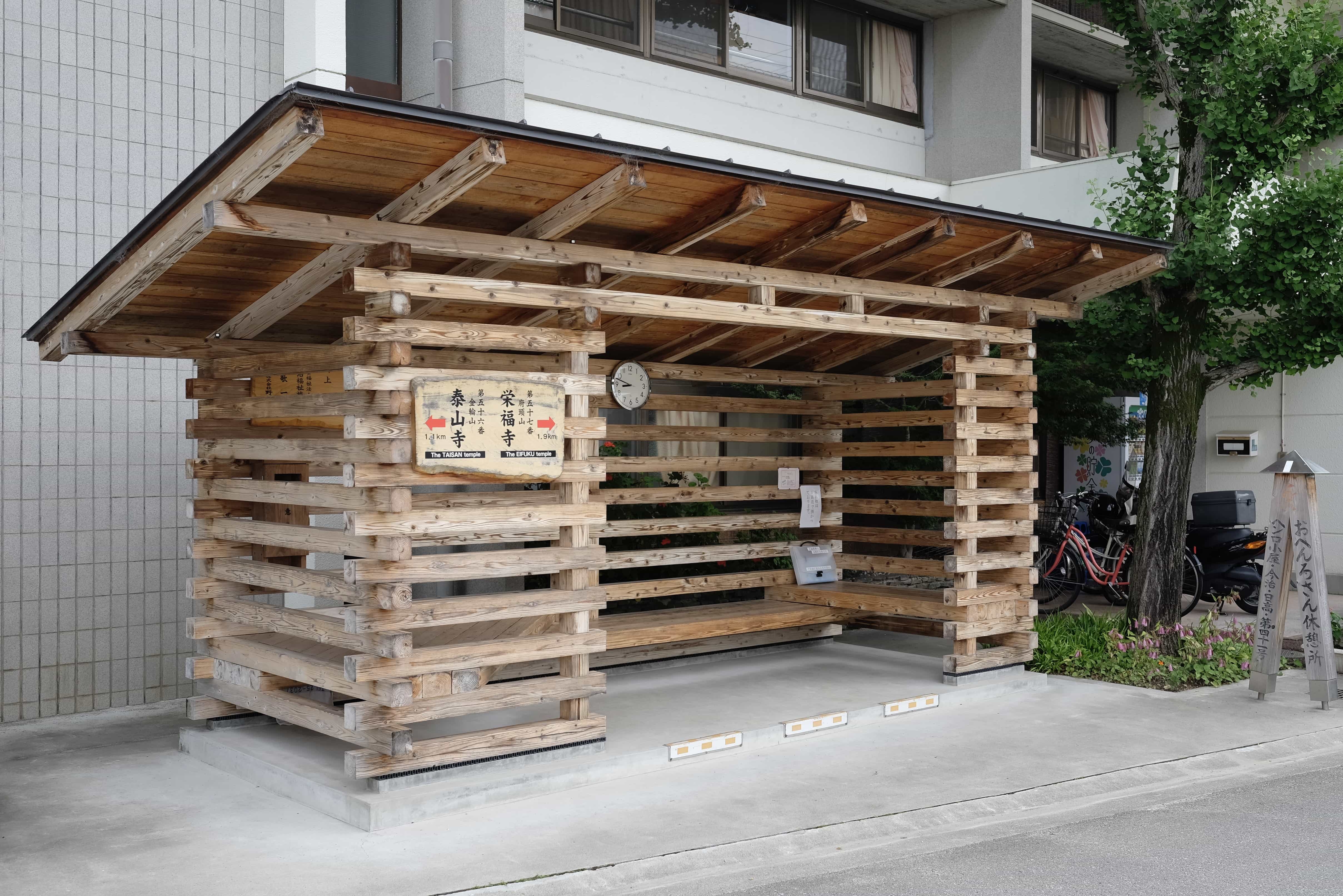 Next to the monument was Imabari-hidaka hut (41) but given its proximity to the surrounding houses I’m not sure how suitable it would be to sleep here. 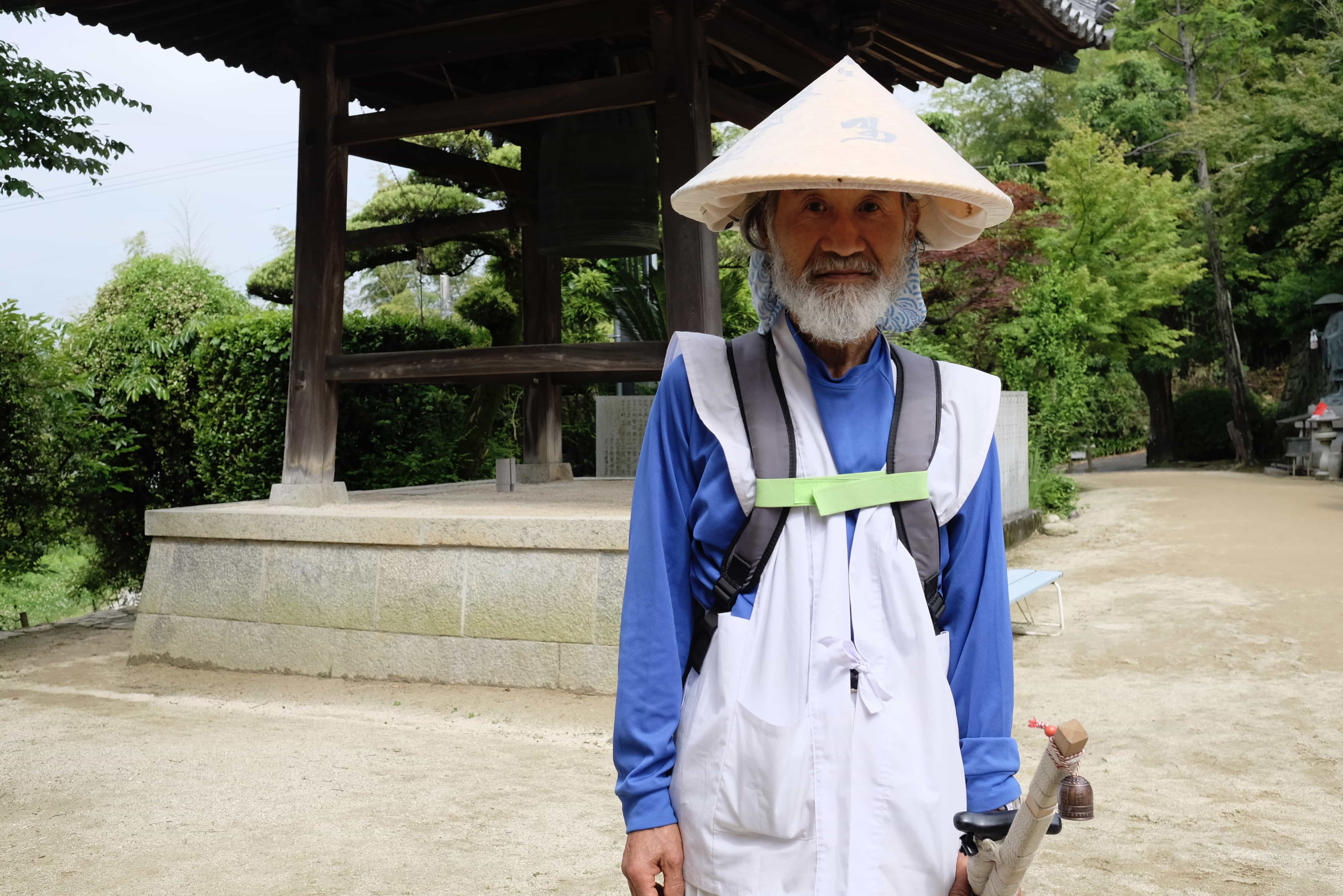 At Eifuku-ji we bumped into the talkative henro we’d met twice yesterday. Another one-sided conversation ensued but this time, we did catch his name; Ishikawa-San (meaning stone river). It’s a pity that my Japanese isn’t better because he seemed to be trying to communicate something important. 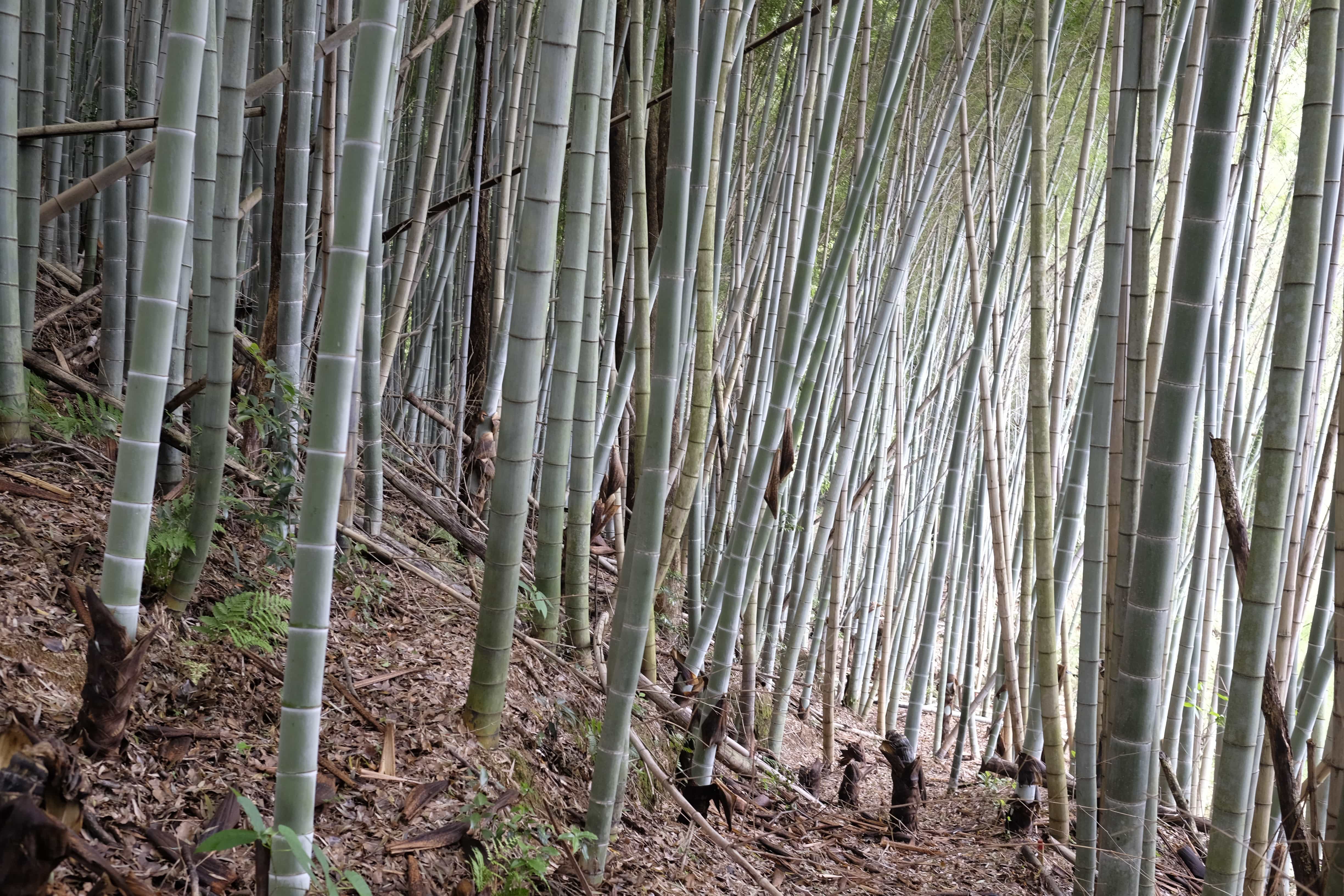 The route to Senyū-ji culminates in a steep uphill climb through the woods, including a beautiful bamboo forest. 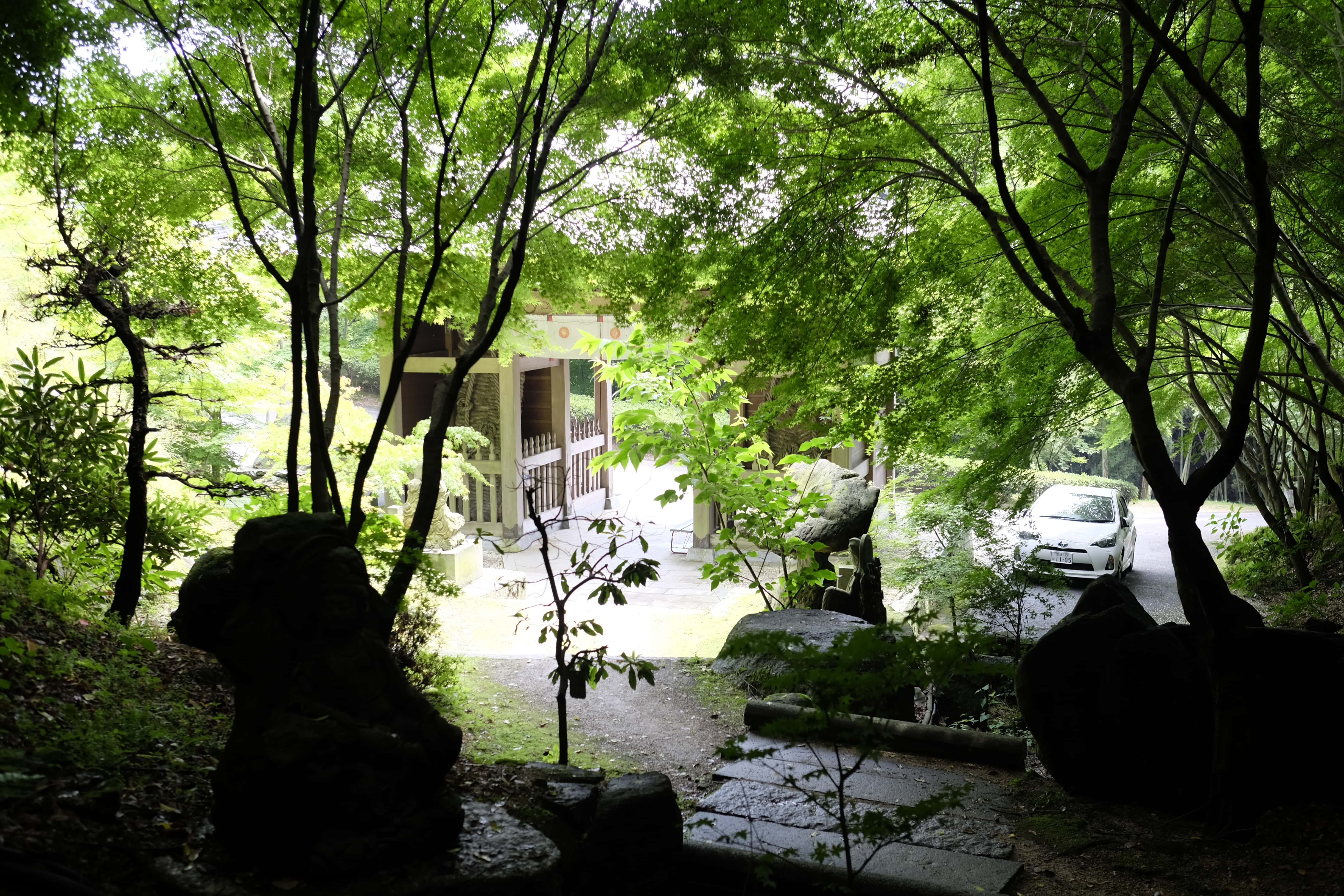 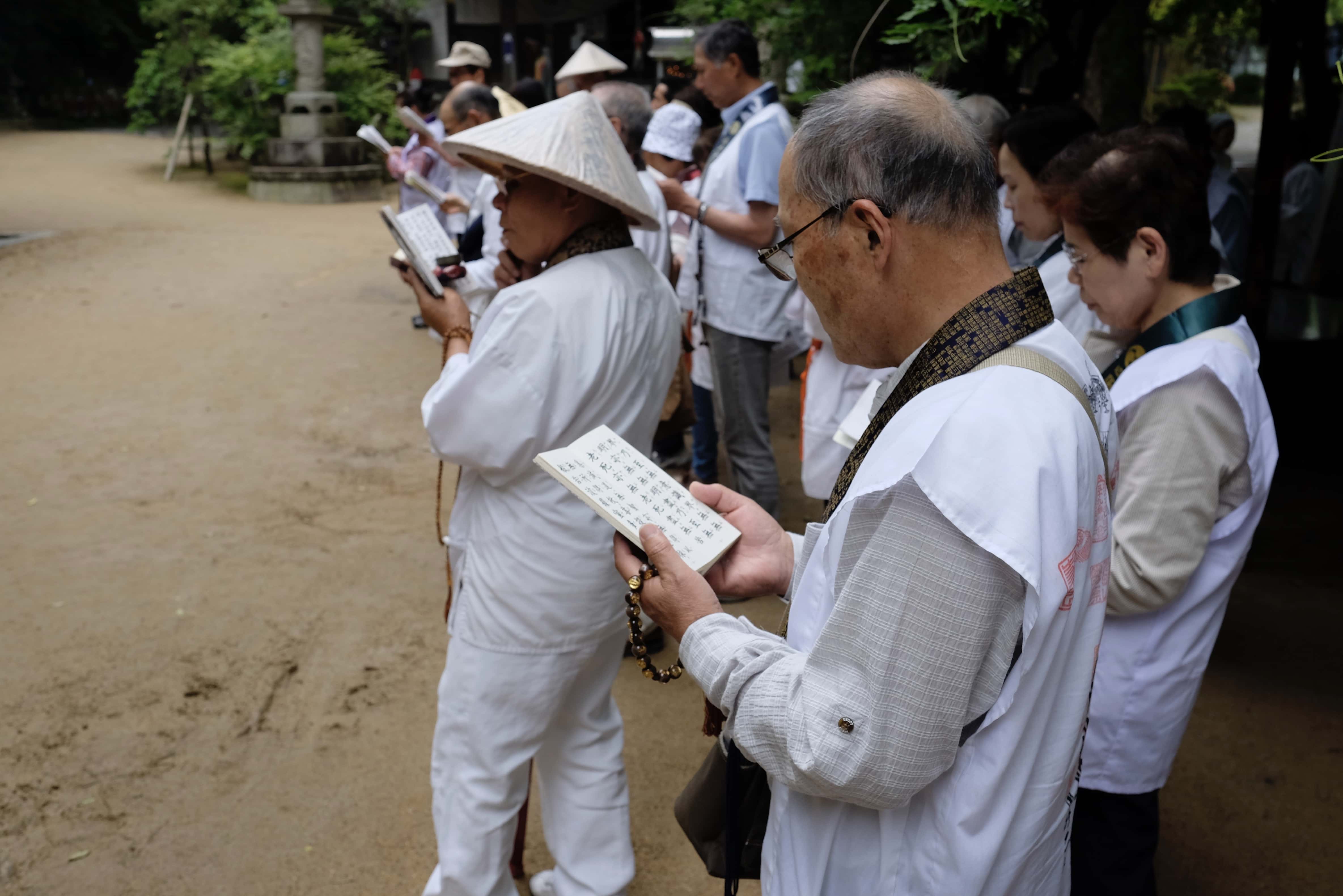 Reaching the top we were greeted by a large group of bus henro with a leader who was chanting through a loud speaker. I had to suppress the urge to tear it out his hands since it was really spoiling the atmosphere. 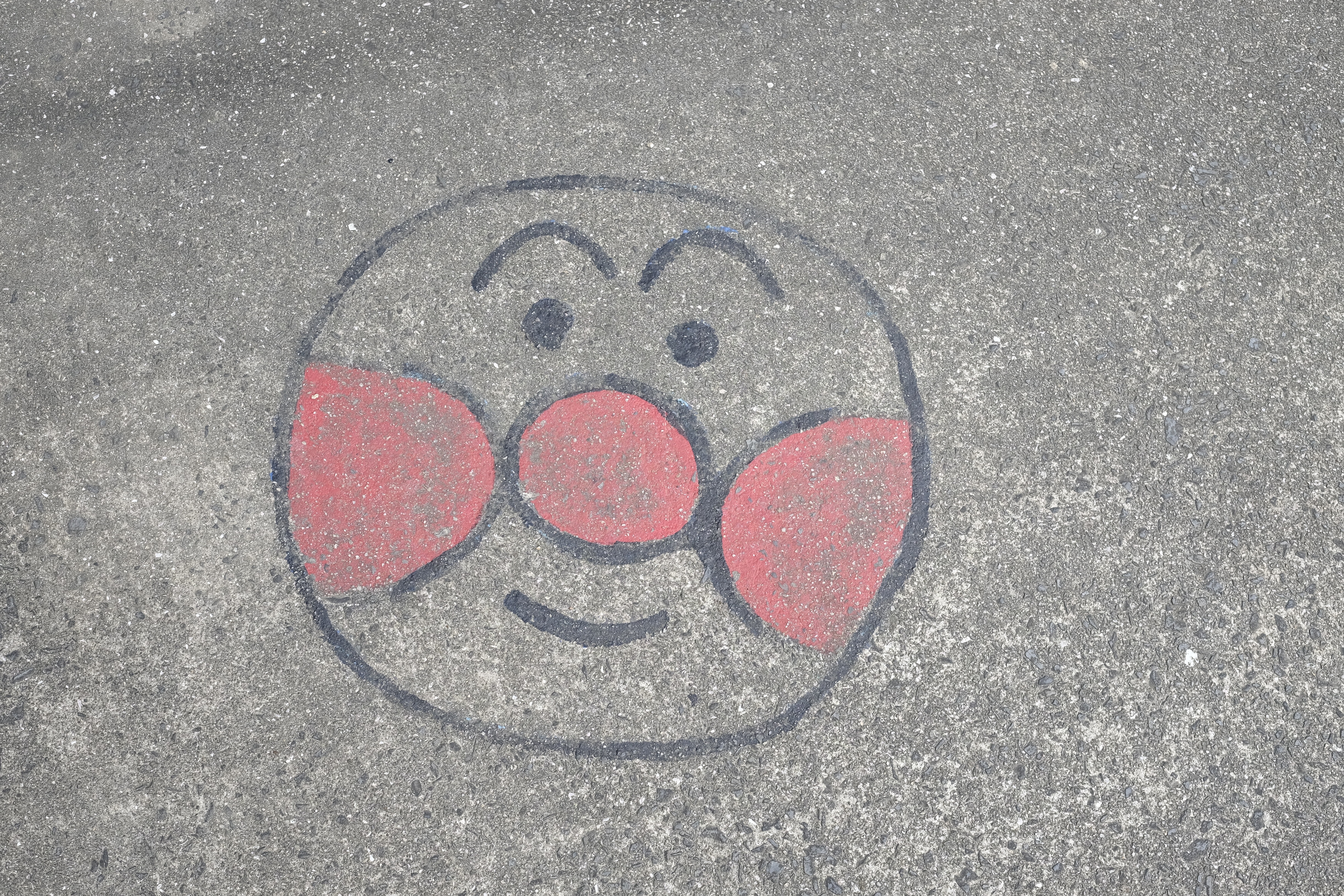 On the way down we stopped at a roadside Mos Burger outpost for lunch. For fast-food their burgers are half decent and much better than the Golden Arches. 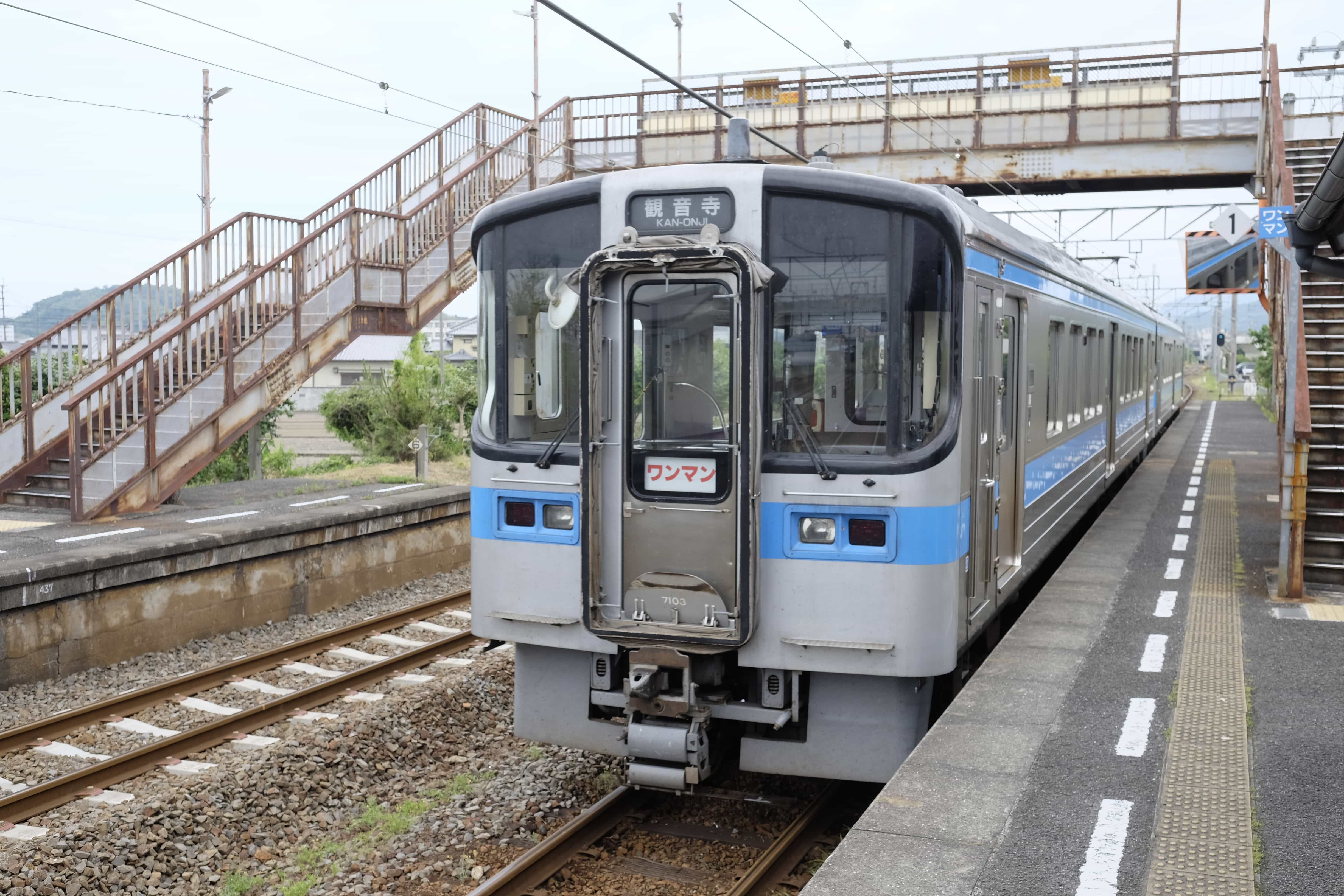 Sadly Chen has to return to work tomorrow so at 12.30 I said goodbye to her at Iyo-Tomita Station. Thanks to Japan’s amazingly well-integrated train system she was back in Tokyo by 7pm. I’m very thankful the weather held back for the past couple of days. 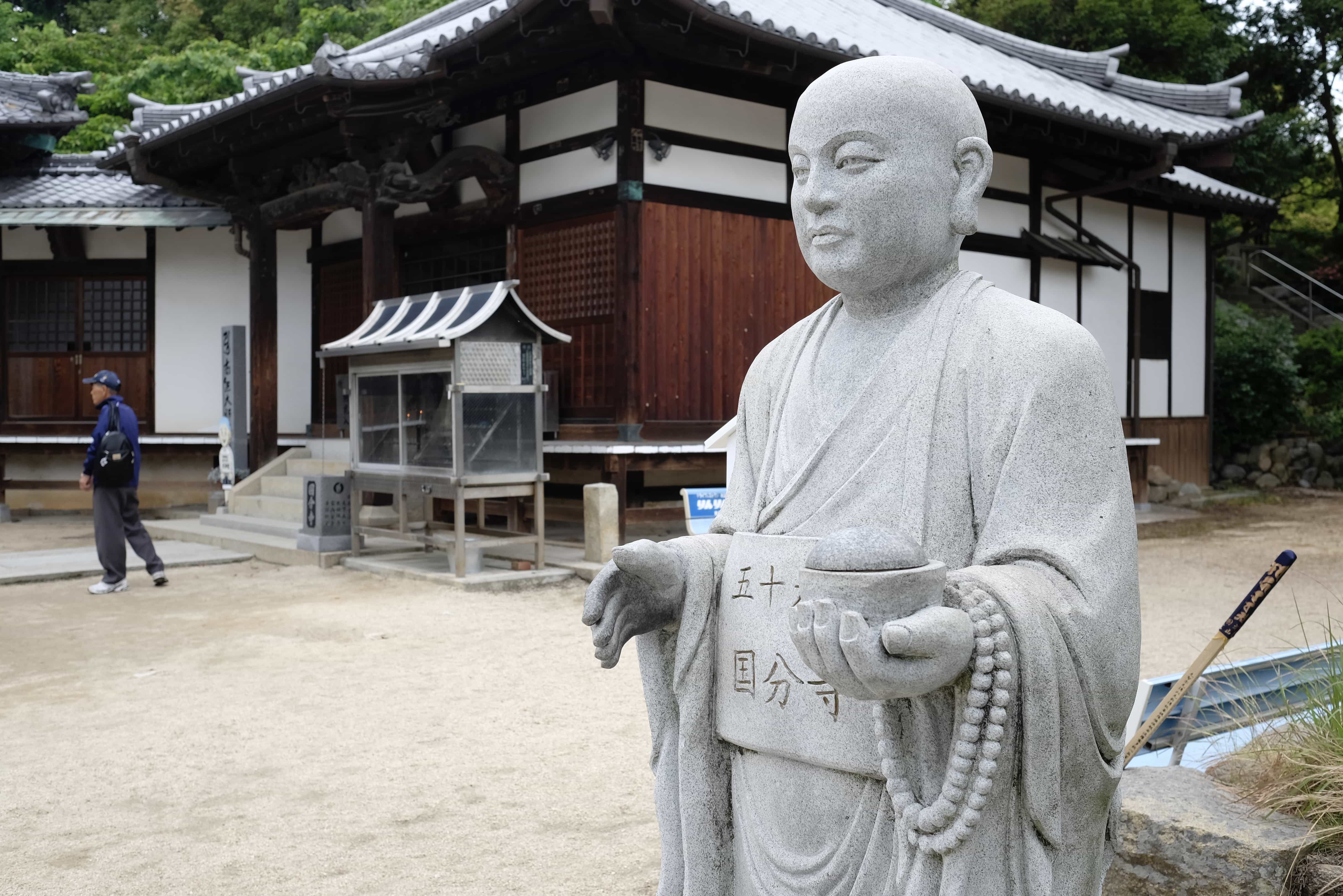 Iyo Kokubun-ji (伊予国分寺 – 59) was a fairly standard temple with the added bonus of a statue of Kōbō-Daishi who’s hand you can shake.

Notice the handle of my stick in the background of the last photo. I stupidly walked off without it, only remembering 20 minutes further down the road at which point I bid a hasty return, cursing myself the whole way back. 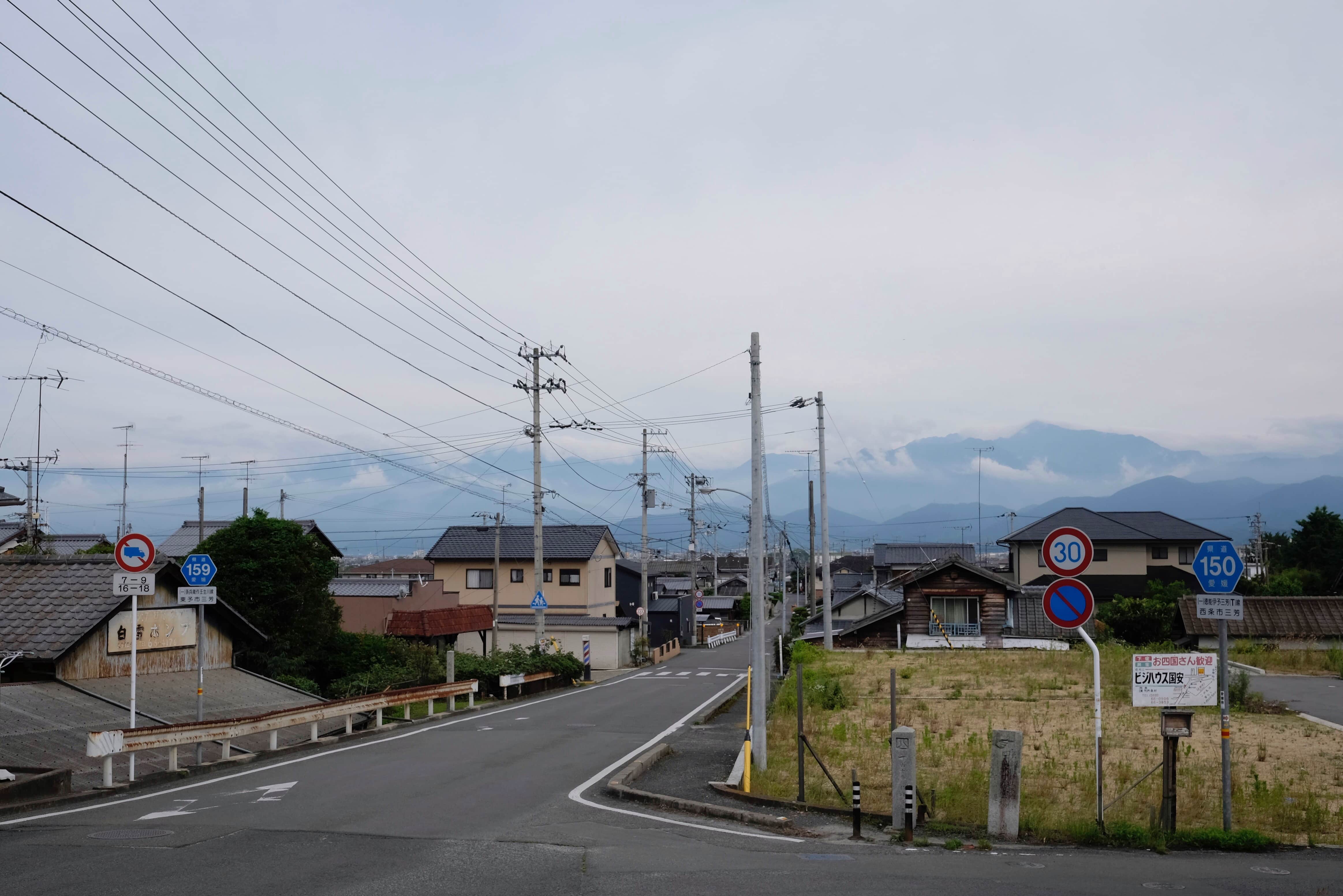 Heading south, parallel to the Imabari-Komatsu Expressway, I got my first view of Mount Ishizuchi on the horizon near Sendanji. Tantalisingly shrouded in wispy clouds and standing 1921m high it was a moment of realisation that what I had been calling mountains until now were really mere hills. 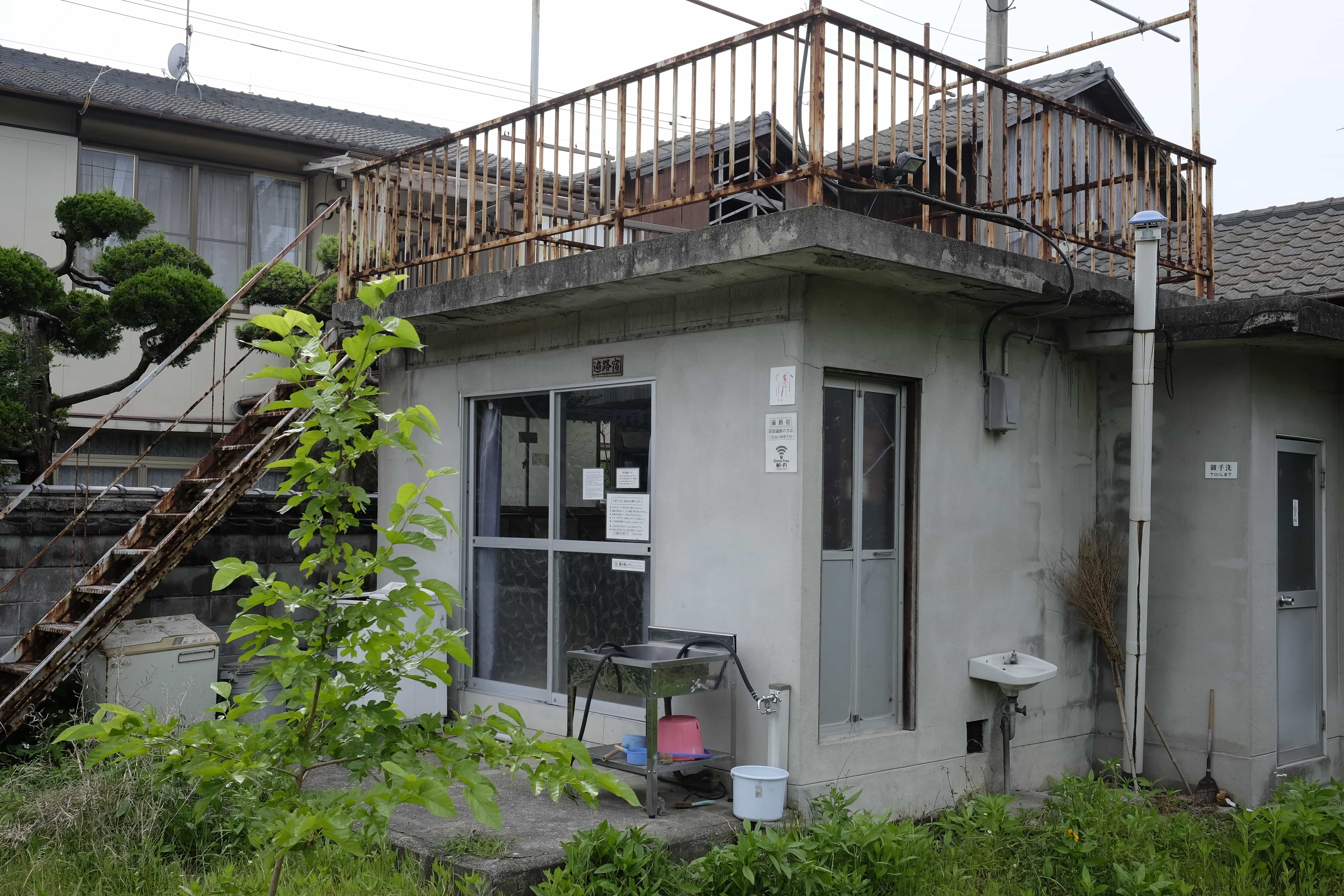 I arrived at Kyōmyōji temple at 4pm. In one corner there’s a small tsuyado with bunk beds and a tatami seating area. They have instructions on the door in English and Japanese which makes it pretty simple. The head priest readily gave his permission to stay and, having left my pack inside, I head to a nearby public bathhouse. The little old lady outside seemed to be in charge and I paid her the entrance fee but she told me I couldn’t take my bag inside. In most situations, I would never feel comfortable leaving my valuables with a stranger but given my past experiences in Japan and Shikoku I knew it would be ok. The bathhouse was basic but did the job. Afterwards, I went to the supermarket next to Kyōmyōji and had a bento for dinner, feeling a touch lonely for the first time.

All photos of yours truly today courtesy of Chen 🙂