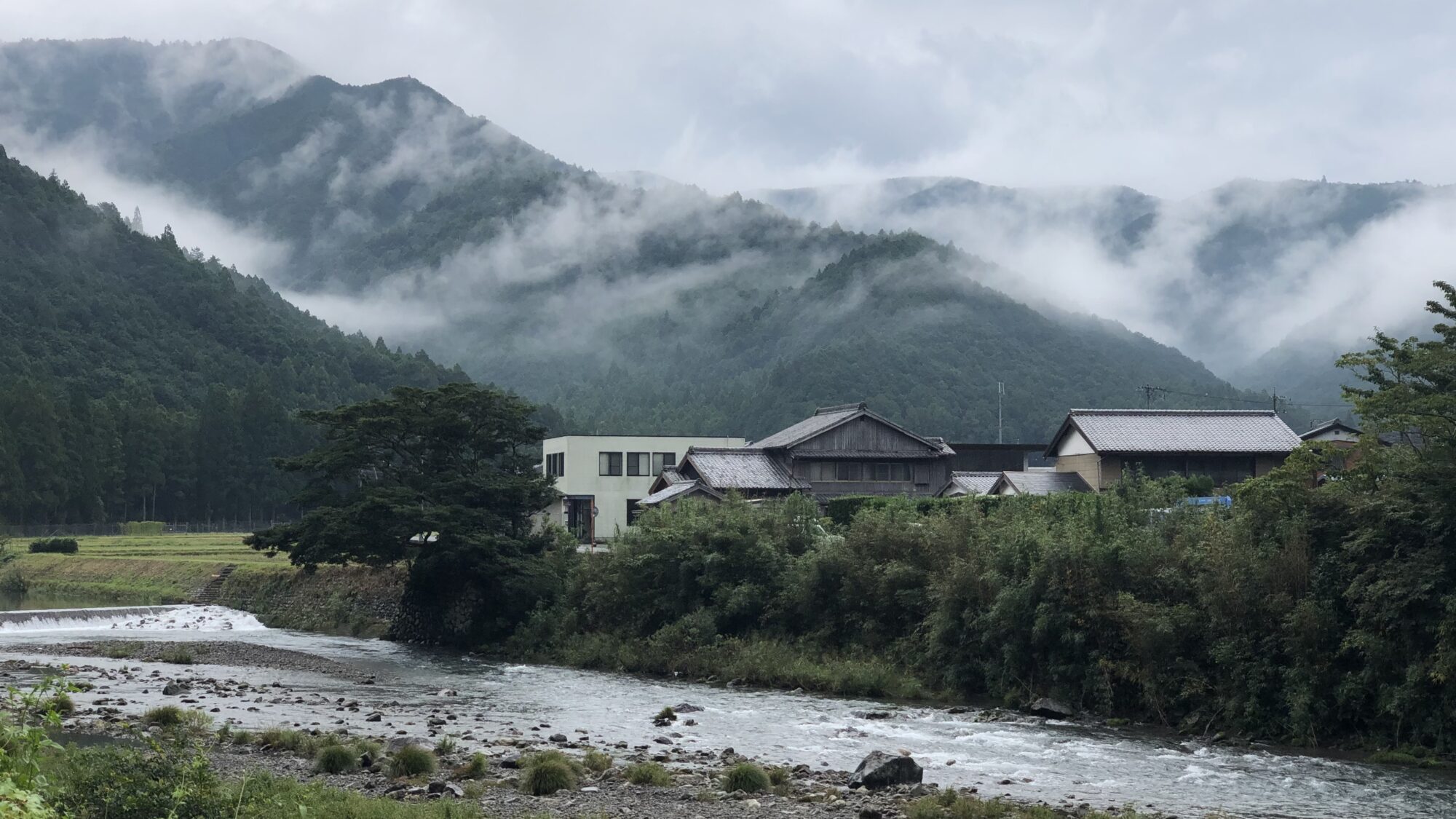 The day started early at Minpaku Idobata with the usual savoury Japanese breakfast of dried fish with rice and pickled vegetables. After collecting our things together we hit the road at 7.45 am.

Chen decided to catch the train to the next pass trailhead, leaving to me continuing along the road. I was determined not to skip any more of the route this trip.

It was gently raining at first but soon stopped, leaving a beautiful layer of mist hanging over the mountaintops as I snaked my way along the valley. Most of this walk was along the road except for the Ashitani-michi (芦谷道) section which delved into the woods beside the river for 0.6km.

I stopped beside Ōuchiyama Station (大内山駅) for a drink and watched some old ladies shopping at a small vegetable shop. The whole village was quite depressing with most stores shuttered and the ones remaining being run by elderly folk. It is one of the saddest things in Japan to see the tail end of these places which will soon be lost to history.

After about 8km of road hiking, I met up with Chen at the trailhead of Tsuzurato-toge Pass (ツヅラト峠). It was a great 2.1km trek over the mountain (357m high). At the top was a pavilion where we stopped to eat the bento that Idobata had kindly prepared for us.

While we were eating, a giant hornet appeared. Multiple stings from one of these can be deadly for some people so we stood still and slowly backed away until it buzzed off. This was the second one we saw this trip and I hoped the last.

On the way down we passed a large section paved in historic stones. These were beautiful but lethal to step on since they are quite slippery. Interestingly, the trail was used by locals to get to the next village until the 1930s.

Once back at ground level, we walked into Nagashima where Chen decided to wait for the next bus to our destination for the day.

I continued on across the river into a town seemingly trapped in the Shōwa era (1926–1989). Walking through Uomachi (魚まち) past old shops with their hand-drawn signage and fossilised window displays was my favourite part of the day. Again, it’s sad when you think about it but fascinating nevertheless.

Leaving the village, I passed a shipyard before stopping at a Family Mart for a break and to stock up. There’s something comforting and reassuring about the uniformity of convenience stores in Japan.

Furusato Onsen (古里温泉) is reached by walking over the 1.1km Ikkoku-toge Pass (一石峠). The small hot spring village sits on the coast and isn’t much more than a collection of inns for domestic tourists.

I rejoined Chen at Furusato Beach Campground (古里海岸キャンプ場) which turned out to be surprisingly well appointed with clean toilets, running water and a fantastic view. You’re supposed to call the local tourism bureau to book ahead but we didn’t know this at the time. Except for the occasional dog walker, we had the entire beach to ourselves.

Once our tent was set up we headed to the nearby Kiinagashima Furusato Onsen (きいながしま古里温泉) for a good soak. There really isn’t anything better after a long hike. Curiously, this was the only place on the entire trip which checked out temperatures and recorded our details.

Afterwards, we walked up the hill a short way to Shū (秀), the only open restaurant in the area where we ate a surprisingly good dinner of sashimi and fish fry, washed down with a cold beer.

We returned to our camp full and happy. The day couldn’t have gone much better and we were thankful that it didn’t rain heavily.