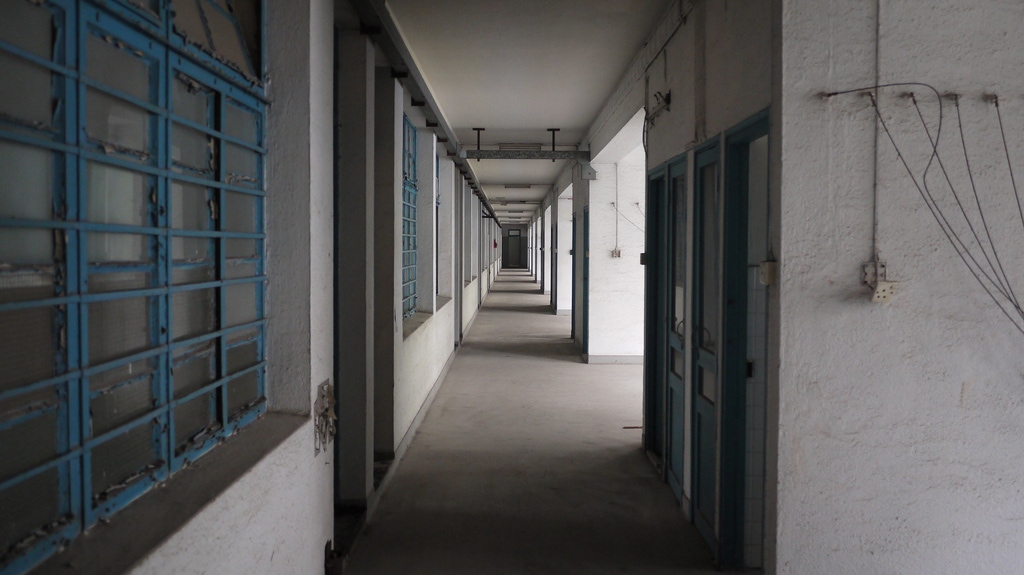 A couple of weekends ago I attended DETOUR 2011, Hong Kong’s annual design, culture, and arts festival which was held at the former Police Married Quarters (PMQ / 前荷李活道已婚警察宿舍) on Hollywood Road in Sheung Wan. This year focused on the theme of “USELESS”, highlighting the impacts of irresponsible consumerism through a mix of exhibitions, performances, and forums.

My first impression of the festival was one of pessimism; with so many installations containing works that would probably be thrown away at the end how could it live up to its ambitions of promoting sustainability?

Luckily I was proven wrong – while the installations were a mixed bag, most of them seemed to have taken the theme seriously and raised some interesting questions about how we contribute to environmental issues as consumers.

Indeed, many works were repurposed from recycled materials themselves, like these lamps made from old taxi light shells by Handsome Co. (俊記) who make simple bags and other products from old discarded Hong Kong taxi parts.

The video above tells the story of how they came into existence.

The real success of DETOUR to me though was its utilisation of the old PMQ premises which are comprised of two parallel accommodation blocks with a large courtyard in the middle (where a stage had been set up at one end for performances).

As with the Victoria Prison and the Central Police Station (which I snuck into earlier in the year), PMQ is another relic of the British Colonial period which had been left to rot while the government endlessly debated what to do with it.

Before it was built in 1889, PMQ was the original home of the former Central School which was the first government school to provide primary and secondary Western education in Hong Kong. After being destroyed by bombing during World War II it was redeveloped as the PMQ in 1948.

While the site had initially been targeted for redevelopment (i.e. bulldozed and turned into a shopping mall/luxury apartment complex), PMQ is now slated to be turned into a ‘landmark‘ hub for creative industries by 2014 where artists and designers can showcase their products to the public.

Judging by Hong Kong’s previous attempts there is a big question mark hanging over how well this will be executed but at least it’s a step in the right direction. Of note, an underground museum will give visitors access to the ruins of the Central School which should be fascinating in itself.

Most of the installations were housed in the identical single-room flats which lined each corridor of the buildings. While they have now been stripped bare of their former inhabitant’s decorations you can still get a sense of their lives from the markings on the walls and the small balcony/bathroom at the rear of each room.

A broken view through a broken window.

Washing lines were strung between the walls of the corridors which today feel hauntingly barren.

Kitchen windows bear the marks of years of accumulated oil and dirt on their fading floral facades.

I managed to sneak onto the roof which, as with much of Hong Kong’s skyline, yielded magnificent views of the surrounding neighbourhood. Amid all the dense buildings it’s hard to imagine that you’re actually on the edge of a small island.

Looking down on the rooftops of nearby buildings you can spy many high-rise gardens being kept by green-fingered tenants.

The roof of PMQ is covered by an elaborate network of pipes, all of which now lie disconnected and rusting.

The building stands as a precursor to the even taller apartment blocks which were to be built around it.

As well as plants you’ll also notice a forest of tv aerials pointing in every direction. I’d love an apartment somewhere like this so I could do BBQs on the roof!

Aberdeen street sweeps steeply downhill creating a deep gorge between the buildings on either side.

Look closely and you’ll notice that there are workers clinging onto the bamboo scaffolding, inside the green netting, renovating an adjacent building – not a single safety harness in sight!

North of Hollywood Road, you can see the historic Wing Lee Street (永利街), the shooting location for the acclaimed film “Echoes of the Rainbow” (歲月神偷主題曲), which was also recently saved from redevelopment and is now being restored.

The film tells the story of a working family in Hong Kong during the 1960s whose eldest son, a popular boy and star athlete, becomes ill with leukaemia.

In Hong Kong, where land is scarce and expensive, the government profits hugely from real-estate deals and hence the fate of history often comes down to money. It’s a really rather sad state of affairs.

Since most of these historic sites in Hong Kong are usually off-limits, this is one detour I was pleased to have taken.