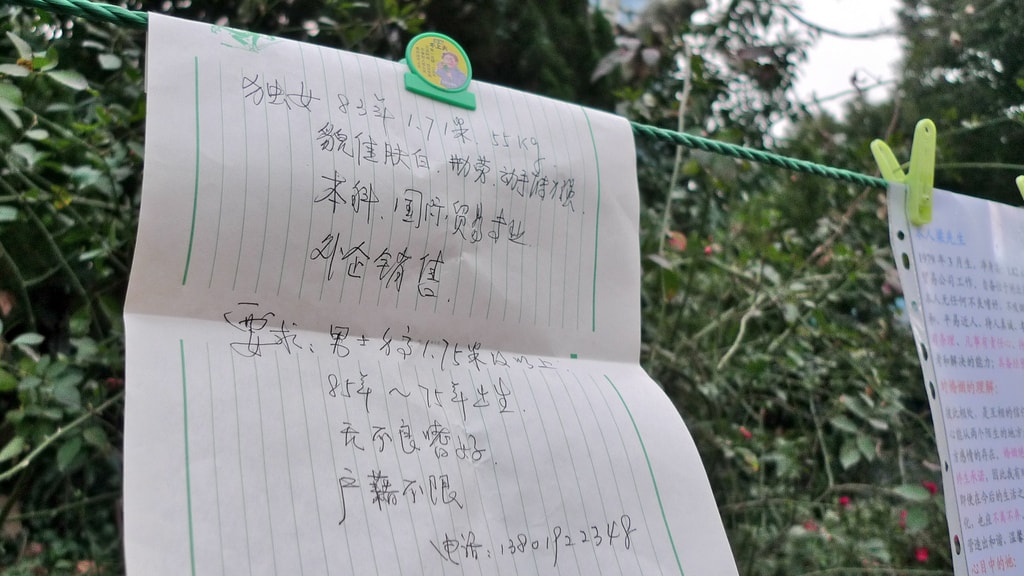 For young people in China, the pressure to get married (and subsequently have a baby) is often strongly exerted by parents who take every opportunity to nag their children about finding a boyfriend/girlfriend. Men are generally expected to get married by 30 and women by their mid 20’s (25 is considered “old”). The older the child gets the stronger the nagging becomes to the point that going home for spring festival and other occasions becomes a source of dread and anxiety for those still single.

The situation is exasperated by the fact that young Chinese adults are expected to work harder than ever to support their parents and themselves so have little time for socializing. In cities like Shanghai and Hong Kong, the number of singles living alone has skyrocketed in recent years, with the average marriage age also increasing sharply (now around 29 as opposed to 22 just two decades ago for men).

Some parents have begun to take matters into their own hands and can often be found hanging around public parks in groups exchanging their children’s vital statistics with other parents in the hope of finding a “good match” which can then be introduced (with or without their child’s knowledge!). I came across this bunch in People’s Square (Shanghai) and was even approached by a mother who was keen to marry off her 30-year-old daughter to me! She may have been a doctor but I politely declined 😉

Job, age, height, education and salary are the key factors under consideration with adverts hung on washing lines, bushes and trees laying out the facts for anyone to browse. Professional matchmakers also loiter around with hand-written lists of potential candidates who have employed them to do the searching. In the 21st century world of online dating, it was a bizarre sight.

You would be forgiven for making parallels with the traditional concept of arranged marriages although in this case nobody is being forced into anything – the parents merely find potential “candidates” which the children can then choose whether to pursue – some call it “parental screening”. For the cynically inclined it’s a far cry from the romantic notion of “true love” but in this 24/7 society practicalities and the pressures of tradition often outweigh such dreams.

If you’re Chinese I’d love to hear what you think about parental screening.