Check out this cool interactive visualisation designed by NEC which utilises some seriously slick flash: 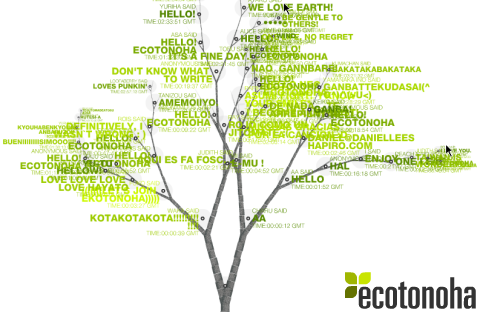 “Ecotonoha is a project – to nurture a virtual tree collaboratively, and at the same time contribute to the actual environment to cope with global warming. As you make Ecotonaha’s leaves, the virtual tree will grow, and as Ecotonoha grows, real trees will be planted by NEC”

Annieisms, Is It? – Apparently video blogging is the future, is this the ultimate form of narcissism or actually pretty cool? I’d go with the latter, especially if there all as good as this! I would imagine though that one of these takes a fair amount longer to put together than your average blog post so whether it will catch on is another matter.

Anyone notice how since the Matrix Keanu Reeves seems to have been seriously type-casted? Now all he seems to play is pseudo-philosophical characters with issues (Constantine etc). I guess being Neo isn’t something you can really top, my advice would be to stop while you ahead! That said, his next film, ‘A Scanner Darkly‘ (2006) actually looks pretty good.