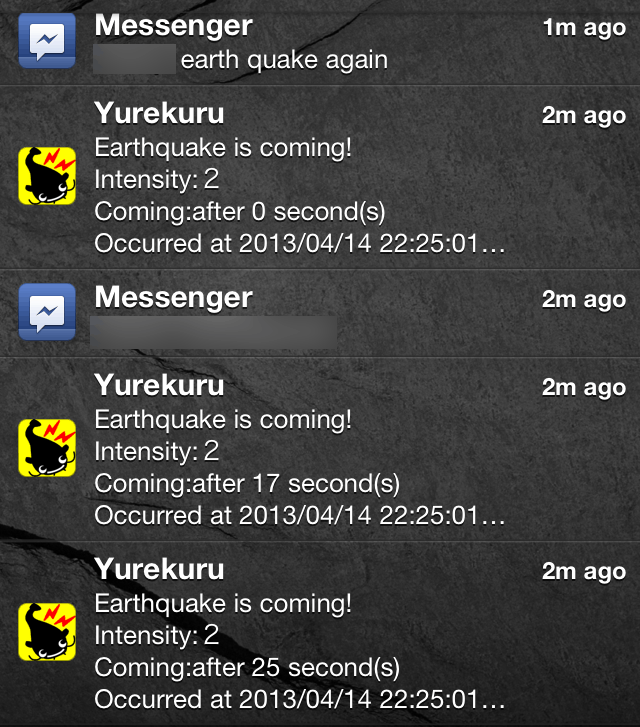 I have to admit that the first few small earthquakes I’ve felt in Tokyo have been equal measure unnerving and exciting. Before moving here I didn’t realise that they would be so frequent but apparently, there are over 100,000 per year, most of which are so small they are unable to be felt.

Earlier today I installed the Yurekuru app which sends push notifications to your phone, giving you a few seconds early warning of an impending earthquake and its estimated seismic intensity. The app works with the Earthquake Early Warning (EEW) system provided by the Japan Meteorological Agency (JMA) which also sends out alerts to trains, elevators and other potentially dangerous equipment to automatically shut down.

Tonight I got my first alert telling me that an intensity 2 quake was 25 seconds away with an ominous countdown. It was amazingly accurate:

While this was only a minor tremor and all you could feel a slight swaying/shaking sensation, I’ll be keeping a close eye on the alerts – anything an intensity 5 or above would be cause for alarm.

Luckily Japanese citizens are very well-rehearsed from school-age about how to prepare and react before, during and after an earthquake. Each district has emergency evacuation points for use in the case of a major quake.

Lots of information in English about what to do can be found here.