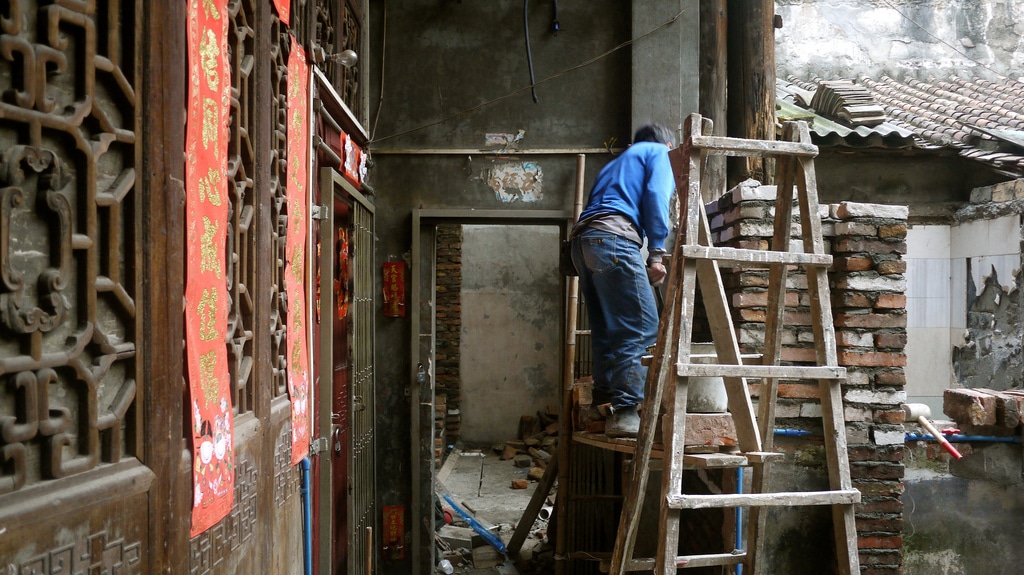 Over the past few years I’ve visited Guangzhou (广州) countless times for both work and travel, but besides the excellent cuisine, never found it particularly inspiring – it’s grey, heavily polluted and over congested. However, on my last trip, I stumbled across an area which gave me a whole new perspective…

Being a little bored in Hong Kong during the 2012/13 new year holidays I took the rickety old intercity through train (soon to be replaced by a new high-speed link) direct from Hung Hom to Guangzhou East station – a trip of about 2.5 hours.

After arrival at my extremely modest hotel, I looked out the window and saw an amazing cluster of ramshackle old houses sandwiched between the surrounding office towers. With a free afternoon ahead I decided to explore the interior.

The district is called Xudi (许地) and many of the houses probably once belonged to rich and powerful families or merchants.

While still a residential area, it appears that many of the houses have been taken over by small import and export companies who transport manufactured goods around by bicycle.

Light barely reached the ground in these tightly packed houses.

I was able to climb the stairs and get a better view from the roof.

From the rooftop, the layers of additions and modifications create a patchwork of various building styles, some hundred of years old while others are more recent. I particularly liked the small 4-story towers that some residents had built – an Englishman’s home is his castle after all.

Stacks of cardboard boxes awaiting delivery lay on every corner.

Where there is waste, there is always someone to collect and recycle it.

I was curious about what the license plates on some bicycles were for.

Many older houses had traditional carved wooden doors but most were not in a good state of repair.

I loved this old house where pages of magazines with Western celebrity’s faces had been pasted over the glass.

There was a distinct feeling of faded glory in the area with intricate stonework, like on this building in Jiling Li (畸零里红砖楼), betraying a more opulent past.

Transporting the goods through tight alleyways is a challenge in itself.

Around one corner I found a residence or a former government official under renovation. In China ‘restoration’ usually equates to ‘rebuilding’ but I suppose it’s better than nothing.

The house opposite had a large wood-burning stove in one corner.

It was at this point that an old lady came around the corner, saw me taking photos, and berated me for “trying to damage the reputation of the Chinese Communist Party” (“年轻人不要做对不起社会主义的事”). It’s ironic to think that she thought I was trying to expose poor living conditions when this is the side of China I love the most and wish could be preserved.

The sad fact is that you simply can’t build communities like this in high-rise apartment blocks.

After walking through the rabbit warren of houses I came to Gaodi Street. Opened in 1980, it was the first open commercial product market in Guangzhou, with over 1000 individual traders along the long street.