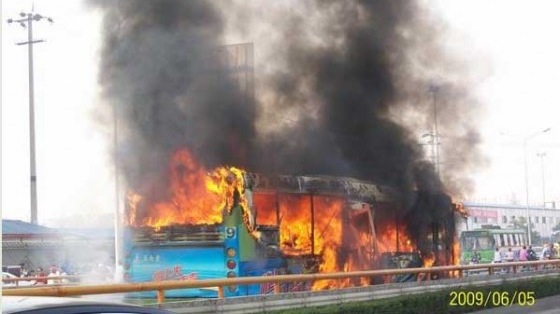 In the past two weeks in China there have been two separate incidents of buses bursting into flames, firstly in Chengdu, then worryingly closer to home in Shenzhen (warning: links contain graphic photos). Tragically in the first instance, 27 people died when they were trapped inside.

There have been no official reasons given for the causes of the fires although there are a number of theories going around:

When you combine any of these possible causes with the fact that most buses in China are usually horrendously overcrowded then you have a recipe for disaster. What makes it even worse is that in the first case the safety-hammers for breaking the windows were missing / stolen and allegedly the bus driver ignored passenger warnings of smoke coming out the engine.

Given the silence from the government, it’s hard not to jump to conclusions as to the cause but for bus passengers, myself included, it leaves an air of nervous tension and suspicion. Some people have even taken to carrying small hammers in their bags and false alarms have caused mass panic.

Whatever the reason for these events it seems clear that nobody wants to take responsibility or even get involved and while there will be much rhetoric about how safety is being improved it’s unlikely anything will change in the short term at least. For a country where corruption is almost a part of everyday life this is a depressing reality.

One thing’s for sure I’ll be thinking twice before squeezing onto an overcrowded bus or one where the wheels look like they might fall off any time soon.