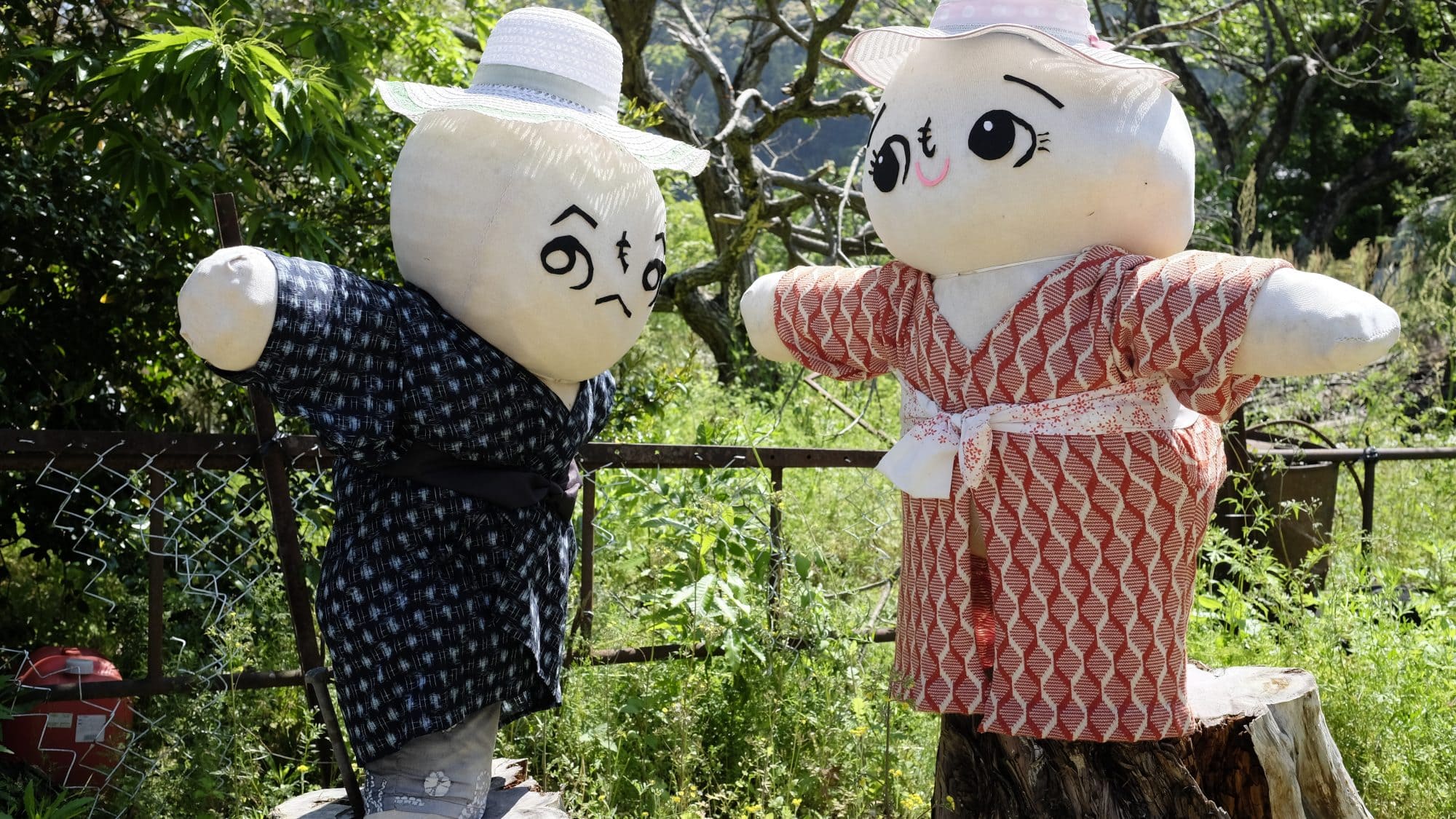 It rained hard throughout the night but luckily by 6 am when we rose for breakfast it had stopped.

With a full stomach and a cheery goodbye from the owners of Sudachi-kan we set off back into the mountains at 7 am.

It was a bright morning and the light streaming through the trees made for a pleasant morning hike.

After passing Tamaga toge the path opened out onto a breathtakingly beautiful view of the valley below. A little further on a henro hut had been built to take advantage of the vista.

As we descended to the valley floor we reached a small village which seemed to be empty but for slightly creepy life-sized dummies of people; children, parents, grandparents and more were all casually posed around the streets.

Was this a piece of installation art reflecting on Japan’s declining population or the work of a pensioner with a lot of free time?!

For the past five days, we’ve been walking through fields of various crops (mostly rice) and it’s been fascinating to watch the farmers at work, using surprisingly very little machinery.

Late morning we met the River Akui at the bottom of the valley and stopped for a break while dipping our sore feet into the ice-cold water. It would have been nice to stay longer.

The rest of the route towards Dainichi-ji (大日寺 – 13) followed the river along an asphalt road which wasn’t very forgiving on our legs and a touch worrying with the cars whizzing past.

At one point a large bamboo tree fell as we walked into the middle of the road blocking one lane. I was worried it might cause an accident so tried to move it but it was surprisingly stubborn. A driver stopped and was able to shift it with his friends so the crisis was averted.

We arrived at Dainichi-ji around 3 pm exhausted. The original plan had been to reach temple 17 but since we were so tired we phoned around to try and reserve somewhere to stay. Unfortunately, it turned out that everywhere was booked because there was an event happening this evening.

In the end, we decided to make a quick dash to Jōraku-ji (常楽寺 – 14), Awa Kokubun-ji (阿波国分寺 – 15), and Kannon-ji (観音寺 – 16) which were only a couple of km apart before the stamp office closed at 5 pm. It was a bit rushed but was nice to see the temples during the golden hour.

The priest at Awa Kokubun-ji got very excited when I told him I was from the UK since he was a Leicester City fan. Knowing nothing about football I could only smile. Turns out they’re top of the Premier League.

At Kannon-ji we encountered our first group of touring henro who were crammed onto three buses going from temple to temple. They were all wearing matching hats and chanting in unison. Luckily I got to the nokyocho before them.

In the end, we ended up staying at another great zenkonyado (善根宿) inside the offices of a taxi firm, Sakae Taxis, which provide a couple of nice rooms for pilgrims to freely stay. I can’t quite get over how kind people are to provide these places.

Since we’re close to the city of Tokushima (徳島市) we’re probably going to take it a bit easy tomorrow and explore some of the local sights.