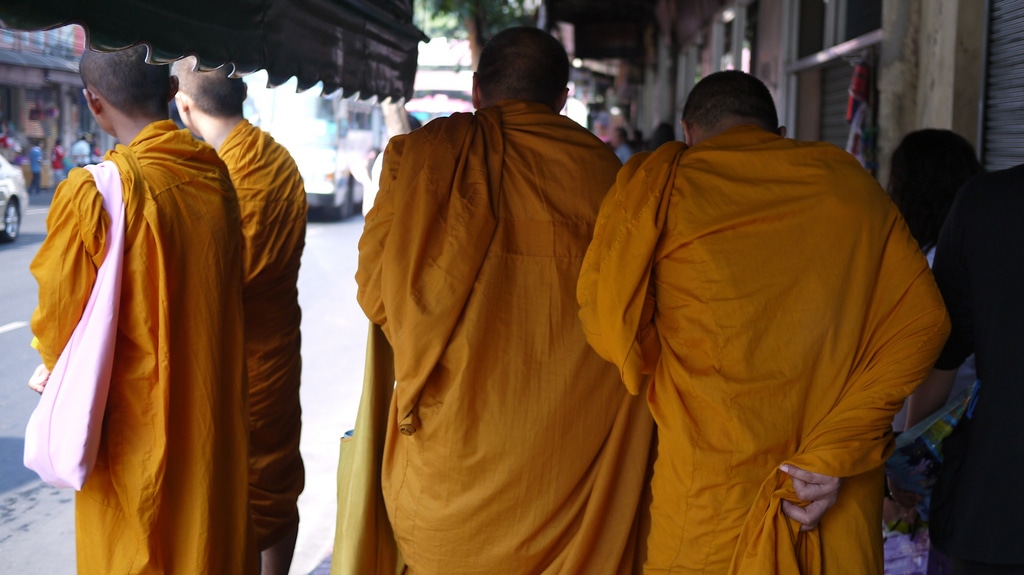 After a very enjoyable morning wandering through the back streets of Yaowarat and Phahurat I arrived at Bangkok’s Chinatown via Tri Mit Road and headed for the Chinese Arch at the Odeon Circle. Officially known as the King’s Birthday Celebration Arch, it was built by the Thai-Chinese community in 1999 to show their loyalty to the Thai royal family.

The characters near the top mean ‘Long Live The King’ and are in the handwriting of Princess Sirindhorn (who is fluent in Chinese). The golden topped building behind it is the temple of Wat Traimit (วัดไตรมิตรวิทยารามวรวิหาร Temple of the Golden Buddha).

Outside on the steps, a richly embellished photo of the king looking regal as ever can be found. The enormous Golden Buddha contained within the temple has an interesting history since at some point in time it was completely plastered over to hide its real value from invaders. Its true form was forgotten for almost 200 years until it was accidentally dropped while being moved in the 1930s. A crack in the plaster revealed it to be solid gold, weighing 5.5 tonnes.

Nearby people stick banknotes together in long ribbons attached to the body of a paper dragon (it being the year of the dragon) as an offering.

Only in Bangkok have I ever seen advertisements stuck to the side of fire extinguishers! I believe this was for some sort of doctor.

Hundreds of small stalls were set up along each side of  Yaowarat Road which was busy with people who had come to join in the Chinese New Year festivities. The Chinese community here dates back to the 1700s when poor peasants moved to the city from Eastern Guangdong.

In Thailand, you can still buy Coca-cola and other drinks in glass bottles which are later recycled. I wonder whether glass or plastic bottles are more sustainable. I always assume the former but not really based on any specific knowledge.

Ducking into a side street is a good way to temporarily escape the hustle and bustle of Bangkok. They also seem to be the favourite places cats to prowl.

Along Plaeng Nam Road you’ll spot many shops like this selling all manner of Buddhist funerary paraphernalia.

On the brightly coloured rooftops of Li Thi Miew Shrine (ศาลเจ้าหลีตี่เบี้ยว) you can see a number of dragons playing with a pearl.

Inside the shrine, hundreds of large orange candles burn perpetually.

One of the most lively temples in the area is Wat Mangkon Kamalawat (วัดมังกรกมลาวาส Dragon Flower Temple) with an impressive multi-tiered gateway at the entrance.

Separation of church, state, and monarchy? Not in Thailand.

Hundreds of red lanterns hang overhead as you wander through the crowded temple. I’d love to have visited here at night.

Under a dark-covered walkway known as Trok Issaranuphap (พระยาอิสรานุภาพ) many Chinese tradespeople can be found selling a plethora of delicious foodstuffs and snacks (sharks fin aside).

The market has existed since the late 18th century and retains an air of times gone by.

Light at the end of the tunnel beneath the overhanging canopy.

It takes a true master of neon to be able to create such an intricate sign like this. Notice both Thai and Chinese characters on it.

I think this was some sort of sweet cake made of strawberry mixed with glutinous rice (correct me if I’m wrong).

You name it – they’ve pickled it!

Searching for some quality ginseng?

As I exited the narrow warren of shops along Sampeng Lane I came across a gaggle of monks going about their business in their traditional orange garb. With my similar haircut, I think I could fit in quite well!

Reaching Chakphet Road, the ethnic make-up changes from Chinese to Indian with many stores selling fabrics and accessories.

Heading back along Yaowarat Road I came across a restaurant cooking and selling authentic Dim Sum on the street!

Despite living in the home of this Hong Kongese delicacy the smells were sorely tempting – I clearly wasn’t the only one feeling this way.

It was quite a spectacle to see the Chinese chiefs making noodles on the street by hand.

Although I wouldn’t fancy this guy’s job – expertly cooking stir-fly in the mid-afternoon heat.

How they’re able to make such thin strands by hand is amazing.

If you don’t fancy noodles you could always try a bit of homemade dried sausage!

Despite the chaos of daily life, Bangkok is a relatively clean city which the residents take some pride in keeping that way.

If you’d like to follow the same path I took the full directions with maps can be found on Wikitravel, which is structured in a similar way to Wikipedia. CNNGo also have a pretty good section on Bangkok 😉