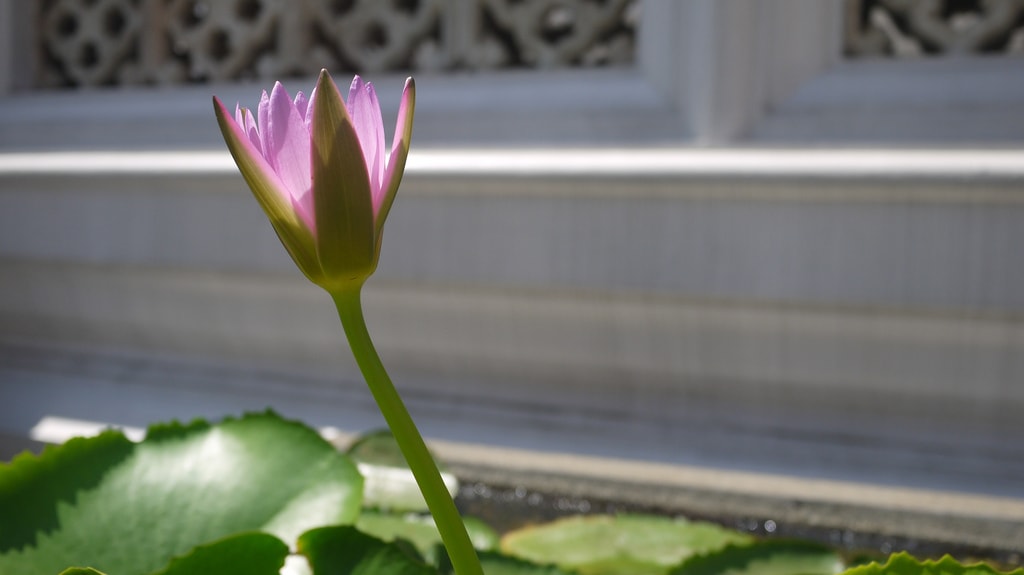 If you’re looking for a quiet, relaxing holiday then Bangkok probably wouldn’t be your first choice. What with year-round heat and frenetic streets which require your full attention just to navigate, the city assaults your every sense each time you step out the door. It barely lets up unless you manage to escape to one of its quieter quarters, of which the historic center of Rattanakosin (รัตนโกสินทร์) is not one. 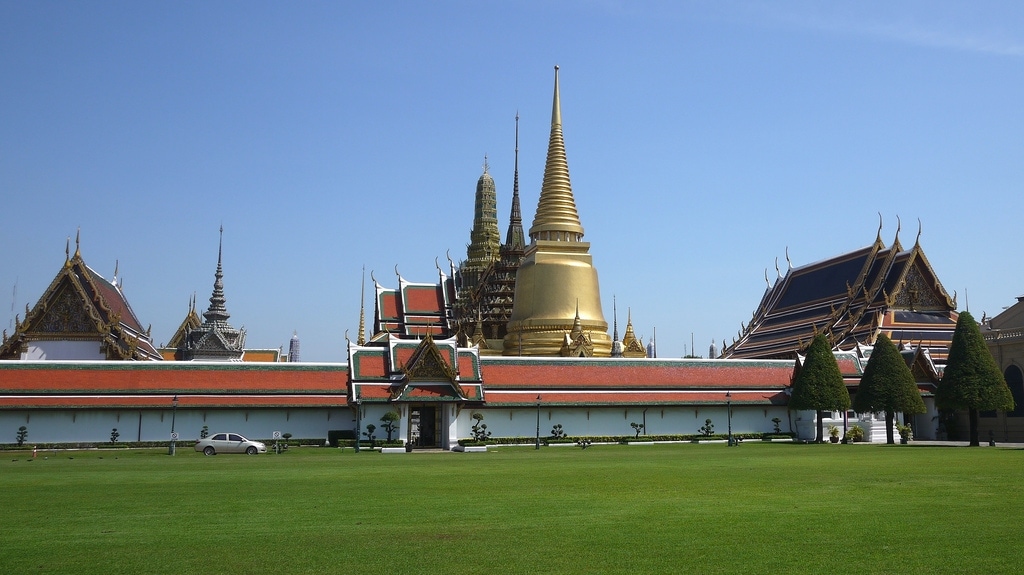 Any seasoned travellers worst nightmare is encountering hoards of other tourists which is ironic given that most of them are following the same guides which point them in exactly the same direction. Although I try not to be another lamb to the slaughter, when visiting somewhere for the first time it’s hard to avoid the big sights and since everyone raves about the Grand Palace (พระบรมมหาราชวัง) being a “must-see” I decided to go there in the morning by way of the Chao Phraya Express Boat. 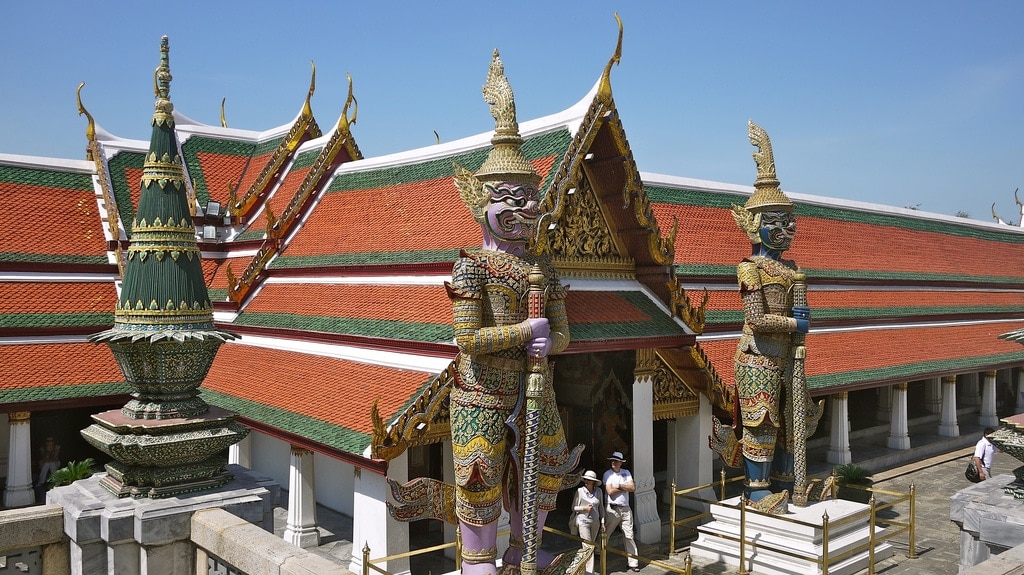 Since this is a site of royal and religious importance, be warned that you must be dressed appropriately to enter (no shorts or sleeveless shirts) or you may end up queuing for ages to rent them. While Thai’s can enter for free foreigners have to cough up an exorbitant 400 baht (£8) for the pleasure – it was the most expensive thing I did during the whole trip! 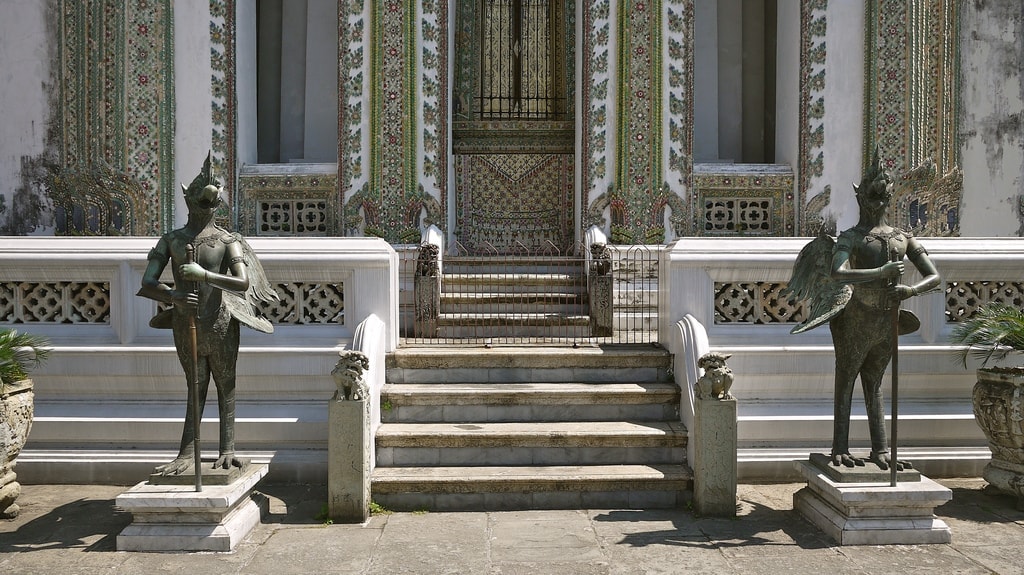 The palace is the former residence of the King and is made up of numerous buildings, halls and pavilions set around gardens and courtyards or varying styles. In one corner is Wat Phra Kaew (วัดพระแก้ว – Temple of the Emerald Buddha), the most sacred Buddhist temple of Thailand, which despite over 200 years of history looks pristine. 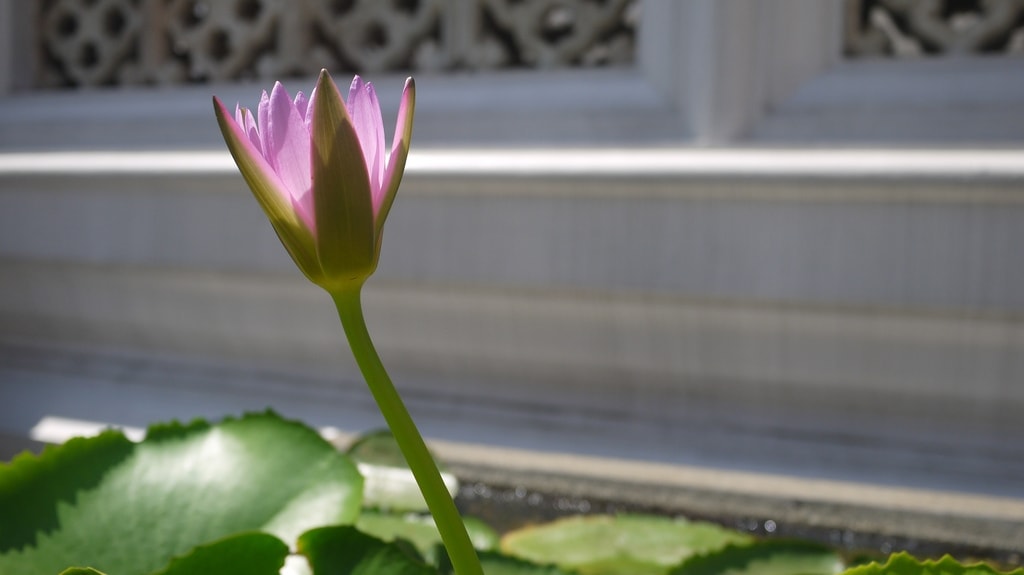 Although the buildings and ground are spectacular, when you’re collectively viewing them with hundreds of others it does somewhat loose its appeal. My photos maybe a bit deceptive since I’m rather good at capturing things at a the right moment but at you will see a little further down it was far from serene. 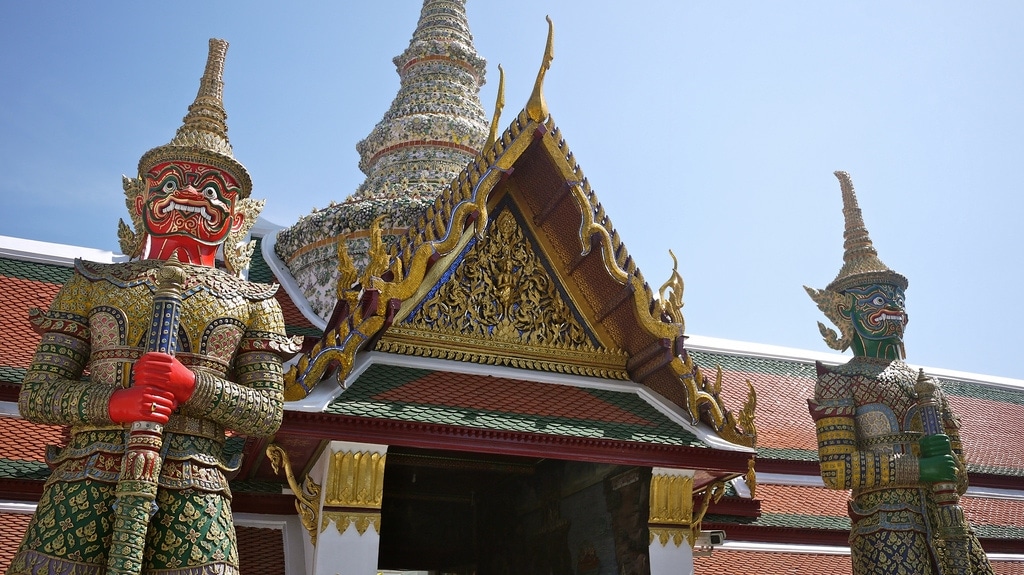 Above a pair of Thotsakhirithons (ทศคีรีธร), mythical giant demons, guard the east gate of the Grand Palace. Inside the main building above is the central prayer room, which houses the statue of Emerald Buddha, revered as the symbol of the Thai state. Except for the Thai King, no other person is allowed to touch the statue. The King changes the cloak around the statue three times a year, corresponding to the seasons. 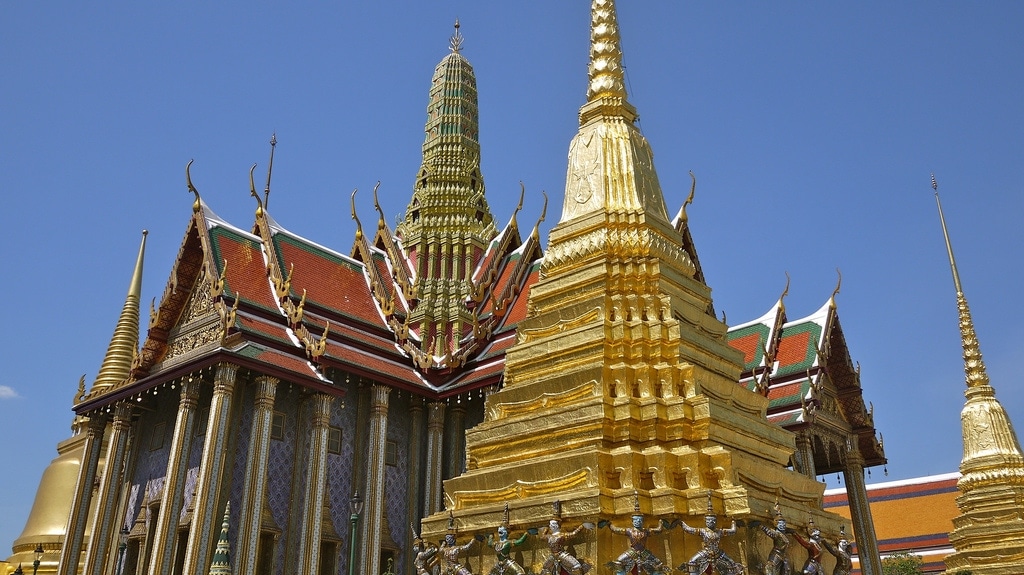 Above the Royal Pantheon sits resplendent, clad in gold lacquer and coloured glass fragments which create a mosaic pattern (closeup below). 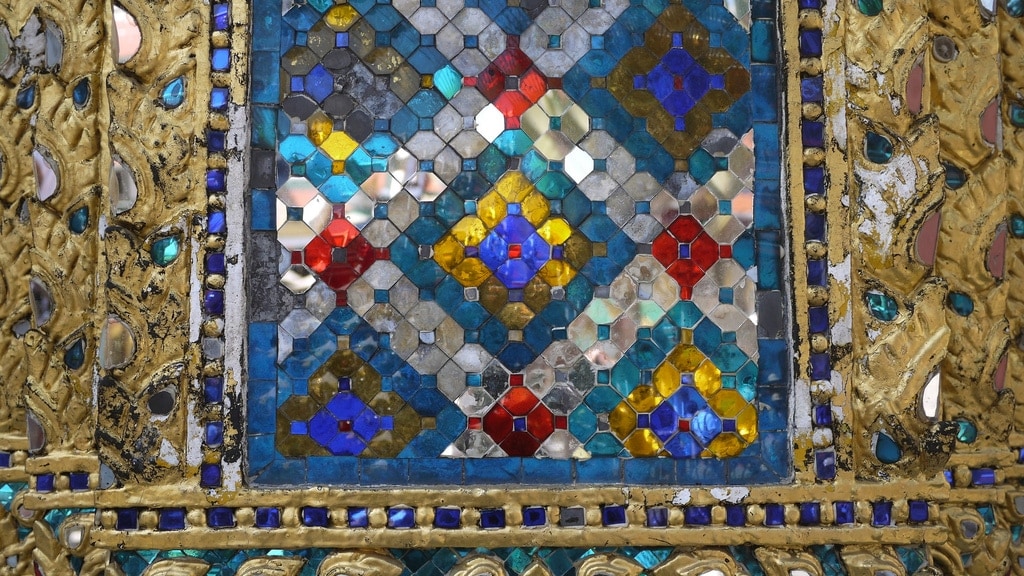 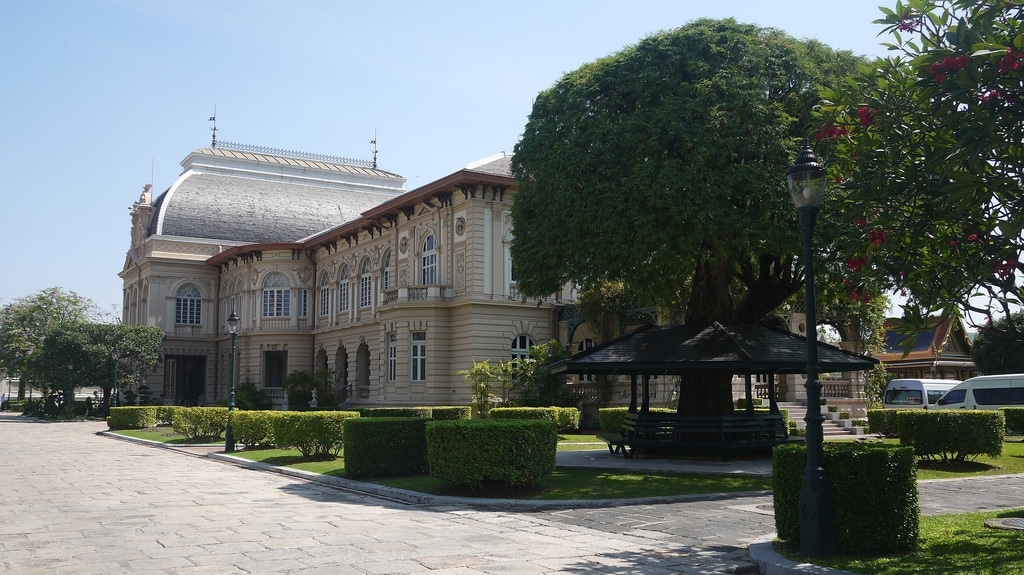 The most modern and largest building in the Grand Palace is the Phra Thinang Boromphiman (พระที่นั่งบรมพิมาน) with is built in a western style but with Thai interior decoration. It’s not open to visitors and is only used by visiting heads of state. Phra Thinang Chakri Maha Prasat (พระที่นั่งจักรีมหาปราสาท) contains a large throne hall and is curiously constructed with the lower part being European-styled, while the upper part is in Thai-styled green and orange tiled roofs and golden spires or prasats (ปราสาท).  The juxtaposition is supposed to symbolise the superiority of Thai architecture (as a crown upon the head) over those of the West (the lower half of the body). 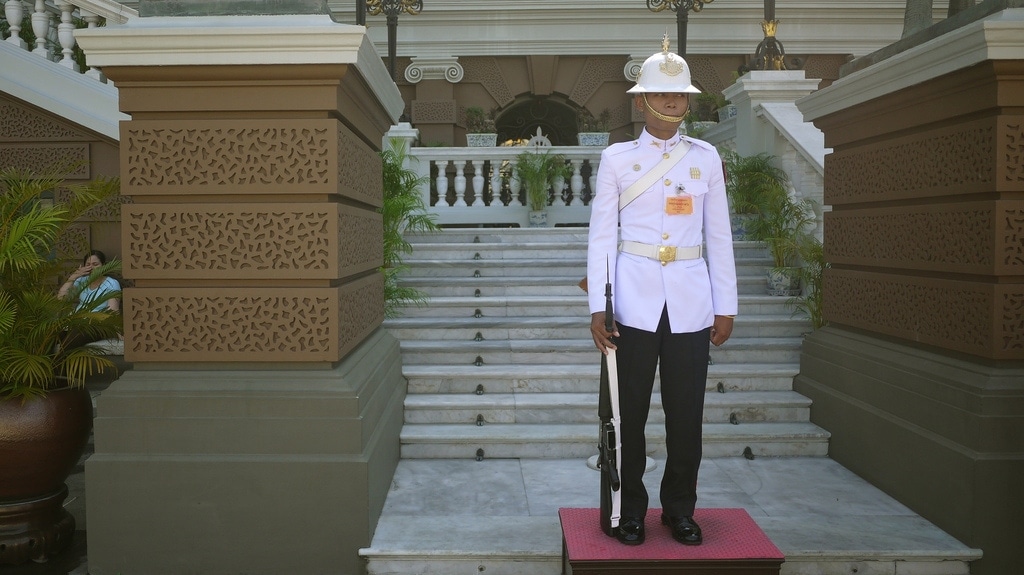 A soldier of the Royal Guards stands at the entrance of the Phra Thinang Chakri Maha Prasat. I wouldn’t want to be wearing those clothes in 30°C+ heat! 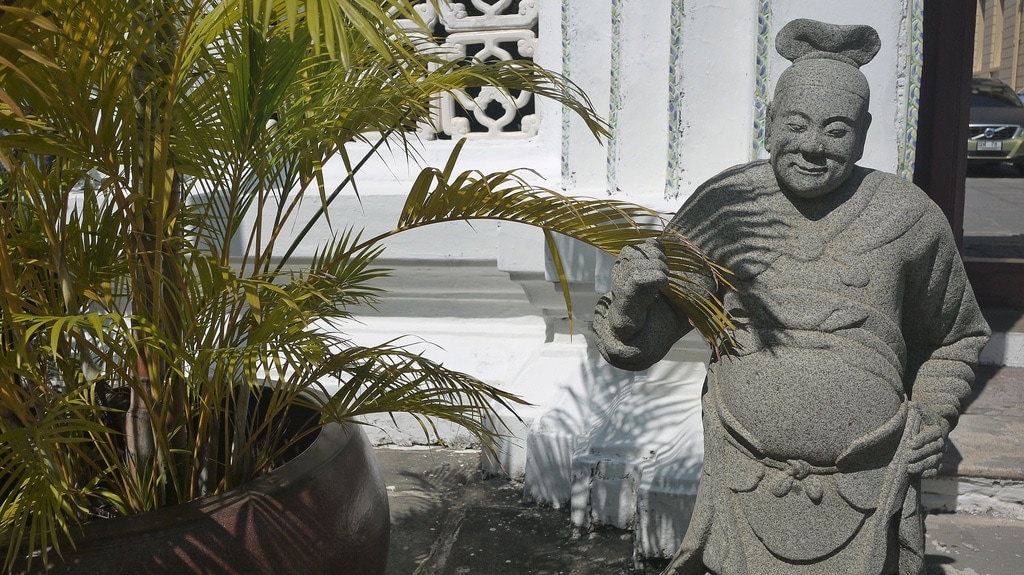 A stone statue fondles a potted fern on the way out. 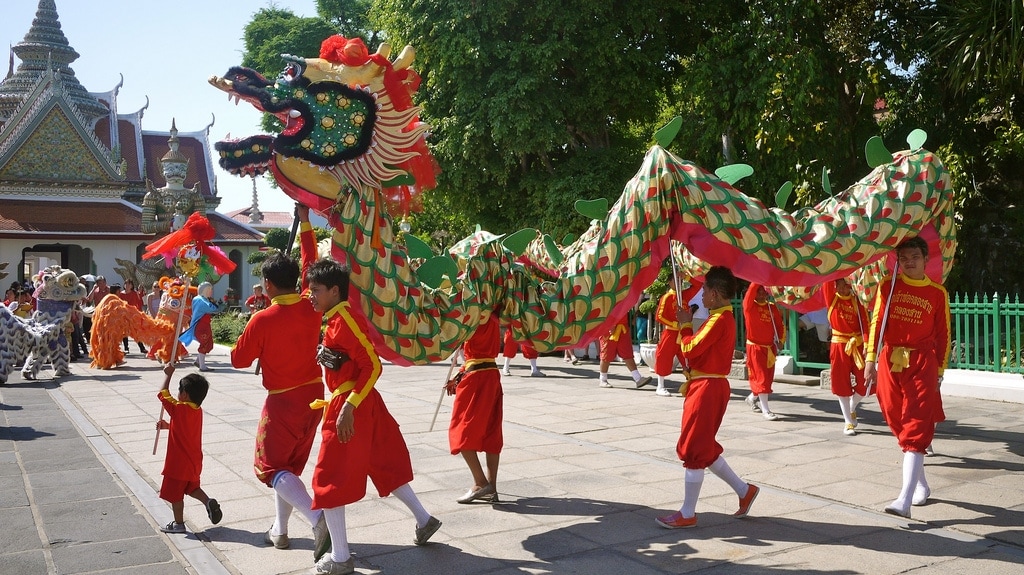 After the sweltering crush of the Grand Palace I decided to avoid Wat Pho (วัดโพธิ์), the other large temple nearby, and took a ferry directly across the river to Wat Arun (วัดอรุณ – Temple of the Dawn). Outside a group children were engaged in an energetic dragon and lion dance for Chinese New Year. 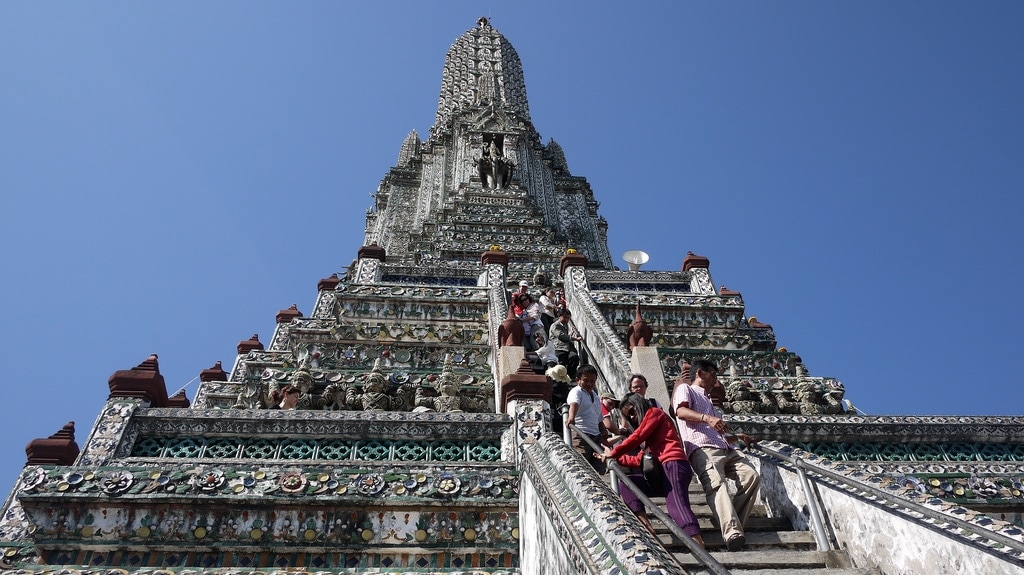 Lying on the west bank of the Chao Phraya River in Thonburi (ธนบุรี), Wat Arun is a formidable sight with a large central prang (66-86m high) surrounded by four smaller ones in each corner. Steep steps lead up each side to a viewing balcony near the top overlooking the river. The climb up and down is not for the faint-hearted – it’s hard to believe that they actually let people up it, although I’ve very glad they do! 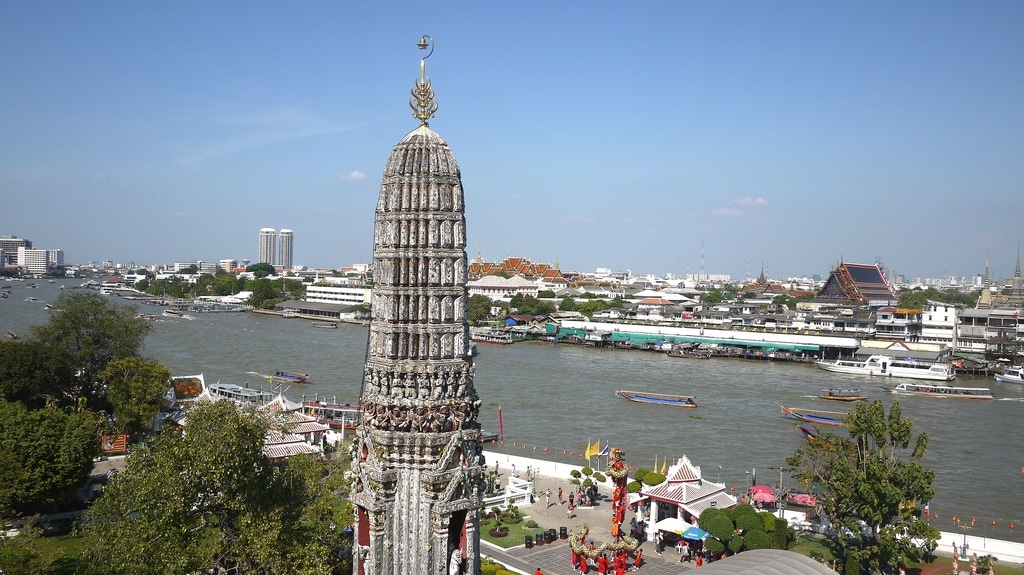 It’s a wonderful spot to watch the boats zipping up and down the river with the roofs of the Golden Palace and Wat Pho in the background. In the courtyard below the dragon wound its way up a tall pole and then proceeded to set off loud fireworks. Away from the unwashed hordes I was finally enjoying myself. 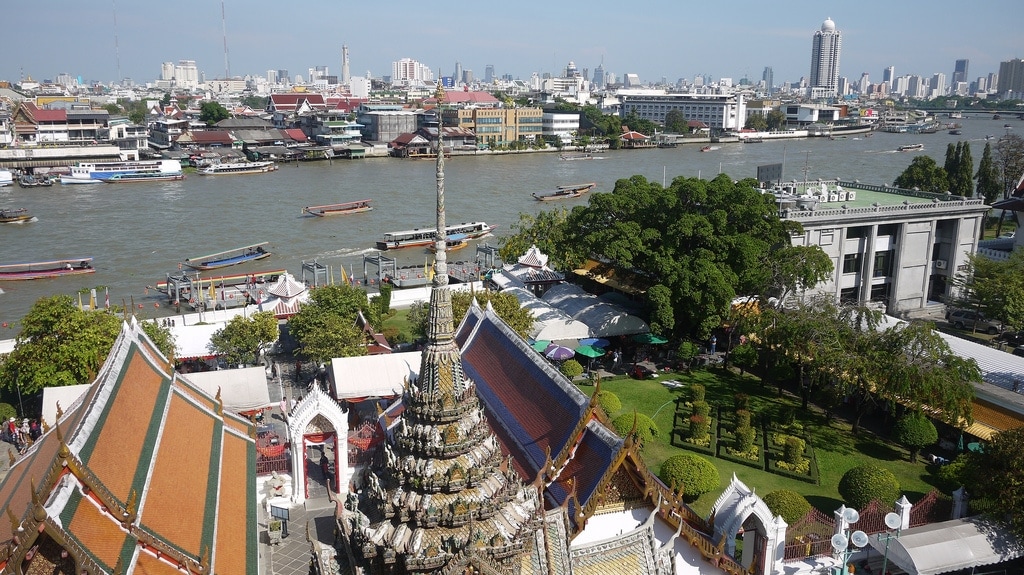 “In Buddhist iconography, the central prang is considered to have three symbolic levels – base for Traiphum indicating all realms of existence, middle for Tavatimsa where all desires are gratified and top denoting Devaphum indicating six heavens within seven realms of happiness”. Whatever that means… 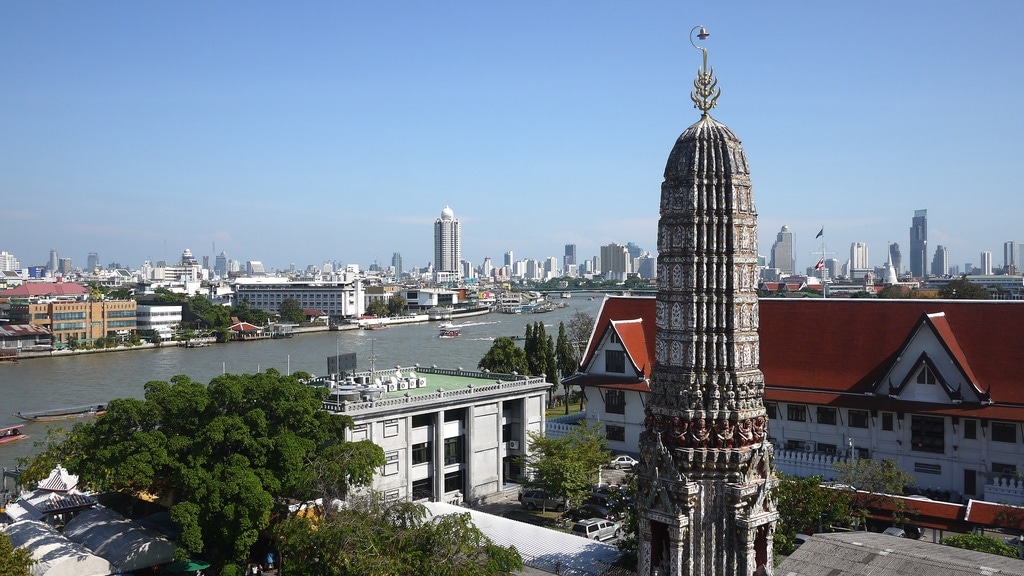 Notice what appears to be a small bell on top of the prang (I’m not sure if it really is). Among all of Bangkok’s temples, Wat Arun has a unique silhouette and is featured prominently on all 10 baht coins. 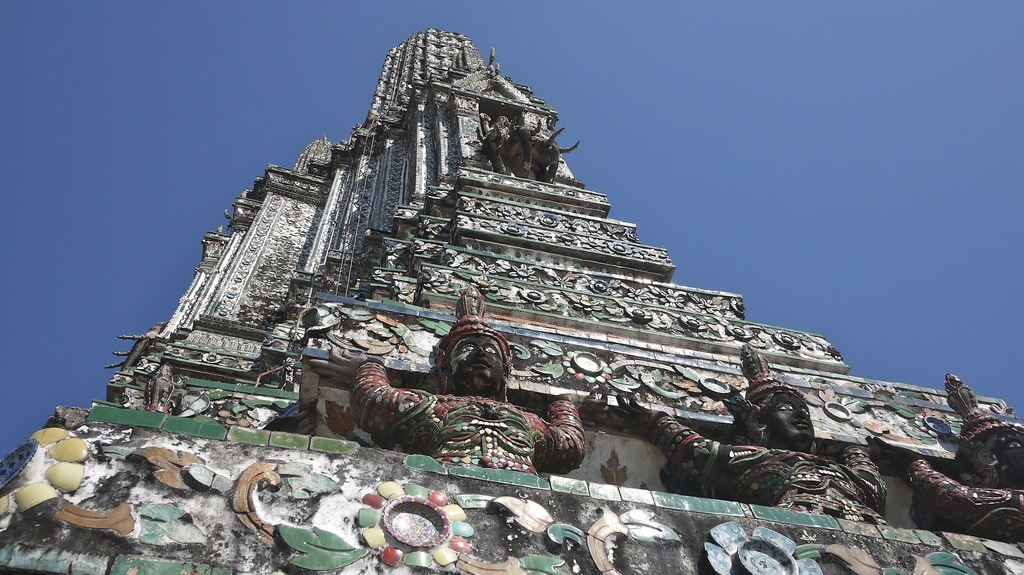 The main prang and its four satellite prangs are beautifully decorated with colourful broken Chinese porcelain pieces which are believed to have come from Chinese trade ships that were shipwrecked at sea. The various figures around the base are of ancient Chinese soldiers and animals. 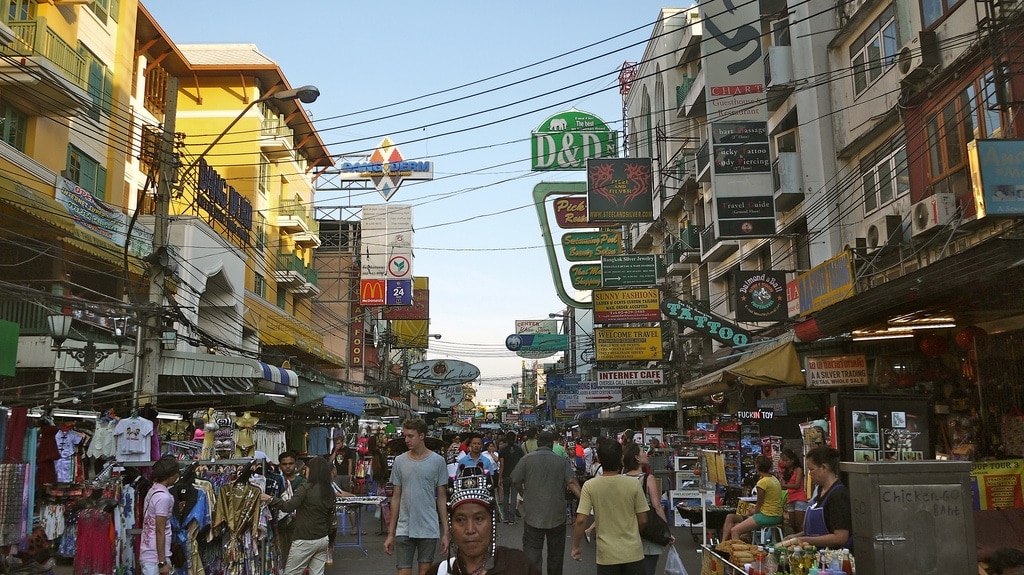 Having watched the rather lacklustre film ‘The Beach‘ and being in the general vicinity, I took a ferry to visit the notorious “backpacker ghetto”, otherwise known as Khao San Road. As might be expected it’s full of cheap hostels and restaurants frequented by students and hippy types. Not my cup of tea but each to his/her own I guess…

As you might have gathered from my ramblings above Day 2 rather spoilt my first impressions of Bangkok, and I would honestly recommend anyone planning a trip consider giving most of the main sights a miss. Luckily Day 3 would turn out to be far more interesting – coming soon 🙂