Is it just me or is advertising getting worse these days? Maybe it’s because I’m getting older but I’m sure the lengths to which advertisers are going these days to get their product noticed have reached new depths of depravity! From product placement in television and film to brand tie-ups, you just can’t escape the constant barrage of people trying to sell you things you don’t need in a way which I would class as morally questionable. I thought this advert I saw for a mobile phone the other day was a classic example:

“…users will be able to capture more of nature’s brilliance or life’s experiences and share the visions and memories in living colour.”

Ohh dear. In other words ‘you can take pictures with it’ – far more clear and concise I think! What makes this nonsense all the more worse is that the ones most taken in by this sort of junk are impressionable kids who then go and pester their parents for whatever the latest must-have fad is. Point in question would be the school at which my brother attends where there are a high proportion of what I would describe loosly as ‘posh kids’ who get whatever they ask for from their parents and then flaunt it over everyone else who can’t. They don’t actually need these things, they’re just lulled into thinking they do by the false economy created by advertising.

Strange world huh? Another side to this is the moronic nature of the adverts themselves which often present a misleading perspective on the world which only spreads ignorance and misunderstanding. Dan Washburn pointed this out recently recently, refering to IBM’s latests adds which paint an absurd view of rural China where computers enable distance learning. The only problem here being that electricity supplies are scarce let alone there being computers or the Internet avaliable!

Ok, enough of this. Rant Over! 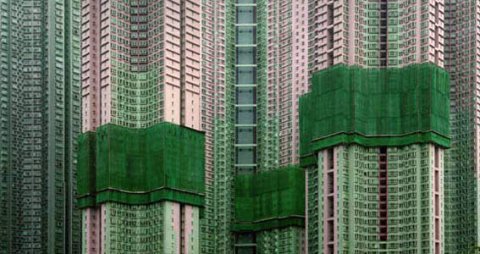 If your interested in photography (or just pretty pictures!) then this online exhibition of photos of architectural density in Hong Kong by Michael Wolf is well worth a look. There are also loads of other galleries you can browse through by clicking on the drop down menu’s at the top of the page.