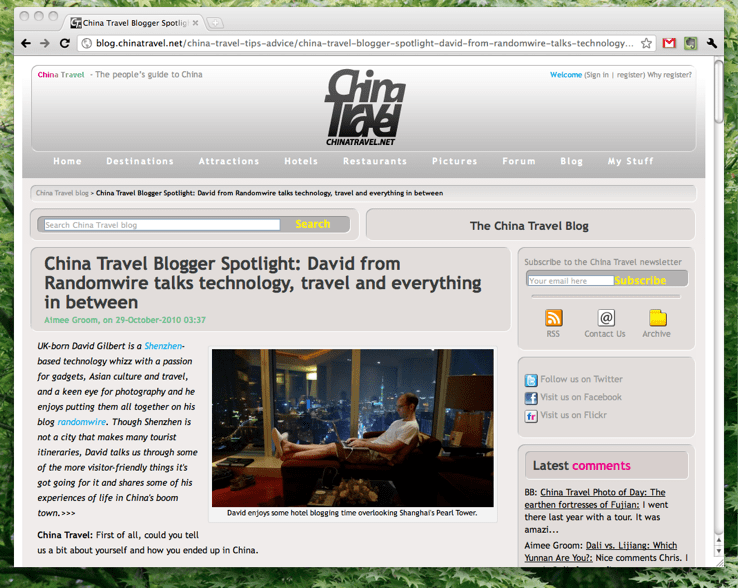 I was very pleased to be asked by Ctrip’s China Travel blog to be interviewed as part of their Blogger Spotlight – check out my ramblings about life in China here (embarrassing picture included)! A big thanks to Aimee Groom for making this happen.

First of all, could you tell us a bit about yourself and you ended up in China.

I’m a Brit from London working for an IT outsourcing firm in Shenzhen delivering software projects for clients in the US and Europe. How I ended up here is a bit of a long story but I’ll try to keep it short –

During my second year of university in 2004, I enrolled in Japanese language classes to try something a bit different. It turns out that I am not very good at learning languages but it did give me the opportunity to make friends with some Chinese foreign students in the same class which sparked of a new interest in China. After graduation I moved to London to begin my first job with dreams of travelling to Asia one day in the back of my mind.

In January 2007 my dreams unexpectedly came true when my company sent me to Beijing for three months to work on a project there. It was an amazing experience which left me wanting more. A year after returning to London I quit my job and with a lot of searching and a little luck found a new one in Shenzhen. Two adventure-filled years later I’m still here!

Why did you choose to live in Shenzhen?

Shenzhen wasn’t my first choice of where to live in China but given my job was here it was the way to get a foot in the door of this amazing country.

Being only 30 years old, the city itself is extremely modern and convenient to live in, but it lacks the history and culture of other cities like Beijing or Shanghai. Aside from work there isn’t a huge deal to do in Shenzhen itself but luckily its just an hour away from Guangzhou and Hong Kong which are great for weekend escapes.

You’re a bit of a technology buff – What are your thoughts on the stereotype of Chinese technology companies preferring to copy and clone rather than innovate? Do you think it’s starting to change, has it changed already or is it a case of a few bad apples giving the rest a bad reputation?

I think there are a lot of different factors at play here but the root cause seems to come from the fact that China’s education system is almost entirely based around stringent examinations with little emphasis placed on creative thinking or the arts. The upshot of this is that while there are many great Chinese entrepreneurs in the technology space many products were born out of ideas  originally copied from elsewhere (e.g. QQ was originally a clone of ICQ/MSN). What’s interesting to me is that over time these clones have become localised to target the local market and are now quite distinct from their origins. I think we’ll see this continue and grow as the new generation bring in fresh distinct ideas but until the government tightens up/enforces IP laws the copying will continue.

What is the most useful piece of technology you’ve come across so far for living or in China?

My iPhone is my essential tool for on the go. Having a fully searchable Chinese dictionary in your pocket at all times is a lifesaver for finding those elusive ingredients in the supermarket or finding your way home! When I’m travelling I use my iPad to stay in touch using Skype (what would we do without this?!) and store things such as maps and other useful info I might need. I wrote an article a while back about essential iPhone apps for China expats here.

Have you always had a blog?

I’ve been writing on randomwire.com for almost 8 years which seems pretty unbelievable now I come to think of it. The site started off as a personal blog while I was at university and over time morphed into what it is today. I mainly write about Asian culture, travel and technology with most of my posts featuring lots of photos from my trips. The site gets decent traffic but I do it purely for the personal pleasure it brings me and I don’t make any money from it. I love getting comments from readers, even if I do get the occasional crazy rant about something I’ve written. My dream is to one day turn the site into something which I can work on full-time.

Have you had the chance to do much traveling in China? Tell us about your best experience so far?

I’ve travelled extensively in the east of China to many of the coastal cities and a few inland. While seeing the rate of development in the big urban centers is incredible some of my most memorable experiences have been in more out-of-the-way places. One which stands out is the little-known city of Kaiping (开平) which is in Guangdong, about 3 hours from Shenzhen. The area is famous for its castle-like concrete watchtowers called Diaolou (碉 樓) built by overseas Chinese in a mixture of western and eastern styles during the 1920s and 30s. Seeing these imposing structures surrounded by rice fields is quite amazing and walking along some of the old streets is like stepping back in time. I know it’s easy to romanticise such places but it definitely has a special feeling. As the site has now gained UNESCO World Heritage status it would probably be best to visit soon before it gets turned into a tourist trap.

In Feb 2009 I visited Xi’an with a friend from work. Going from +23°C in Shenzhen to -8°C in just two hours was a bit of a shock to the system and to make matters worse it emerged the place we were staying lacked heating, hot water or electricity due to the fact that our host had forgotten to pay the bills! After an extremely cold night I woke up the next day to find I had lost my voice – not the best way to start a holiday but thankfully the rest of the trip was great.

What are the top five things you’d recommend a first time visitor experience in Shenzhen to get a feel for the city?

I know I shouldn’t say this but I probably wouldn’t recommend Shenzhen as a destination to visit unless your fascinated with tall ugly buildings and endless long roads. That said if you do end up here for some reason there are a number of interesting places to visit:

Check out the links for more detail about each place.

What is the one thing you wish you’d known before coming to China?

I don’t think I experienced any big surprises but to be  the first few weeks here were a blur. For anyone planning to relocate I’d recommend reading up about Chinese history and culture before they come over so they can get a sense of perspective for why some things are the way they are. One book I’d recommend is “Think Like Chinese” by Haihua Zhang which provides a good overview and practical advice.

What do you miss most from home?

Not including my family, I’d have to say I miss roast dinners and open/fast internet access the most. I should probably invest in a small oven although the lack of one in my kitchen has forced me to become a bit more creative with my cooking techniques (it’s amazing what you can do with a wok!). Western cuisine in restaurants here just isn’t the same.

My biggest peeve would be having to worm around China’s internet blocks every time I want to update my Facebook or Twitter status – it’s really a rather absurd situation which is a nagging source of frustration.

What would you miss most from China if you had to leave tomorrow?

Friends and food. During my time here I’ve made some great friends who have always gone out of their way to help me out when I’ve been stuck in some way. It saddens me to think that I’ll inevitably have to say goodbye at some point but I hope I can repay their generosity in the future. Without them I never could have made it this far.

On the culinary side of things I’ve never visited a country with so much variety in its cuisine than China. There simply isn’t anywhere like it and even if you’re not into some of the more unusual dishes there’s something for all tastes (even vegetarians). If you’ve never tried real Chinese food in China then you’re missing out big time!

If you had to sum up your life in China in three words, what would they be?