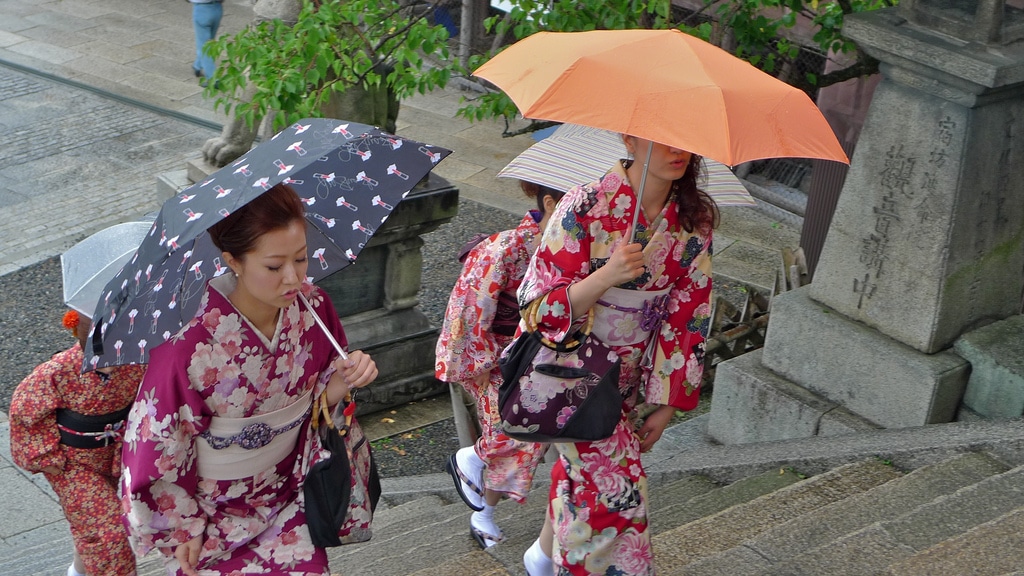 I spent the second half of my recent trip to Japan in Kyoto (京都); formerly the imperial capital of the country which carries the reputation as its most beautiful city. Having taken an early morning Shinkansen bullet train from Tokyo I arrived a little over two hours later at what must be one of the most magnificent stations I’ve ever seen…

Quite at odds with Kyoto’s historical image, its towering glass and steel roof stands 70 meters high and 470 meters from east to west. As well as a variety of shops and restaurants on the way out you’ll find a tourist information centre which offers useful maps in English and other languages (be sure to pick up the BusNavi map).

After getting my bearings I hopped on a bus to explore Southern Higashiyama (東山区) nearby, my first stop being Sanjūsangen-dō Temple (三十三間堂). The long main hall contains 1000 life-size statues of the Thousand Armed Kannon deity made from Japanese cypress – quite a sight but unfortunately, photography is forbidden inside.

The clouds overhead had been looking ominous since my arrival and at this point, it started to rain. If you’ve ever tried taking photos while carrying a bag and umbrella then you’ll know how hard it is! Luckily Kyoto remains photogenic whatever the weather.

Kyoto was largely spared from bombing during the Second World War so thankfully is one of the few Japanese cities that still has an abundance of prewar buildings, such as the traditional shops and houses seen here known as Machiya (町屋/町家).

As I wandered through the narrow streets I occasionally spotted girls wearing colourful kimonos (着物) – apparently dressing in traditional outfits allows locals to ride the buses for free – which seems like an ingenious idea to keep their cultural heritage alive.

High-quality hand-made kimonos are hugely expensive and the full kit can exceed $20,000 USD – not something you want to get wet! Cheaper machine-made fabrics can be substituted significantly reducing the price.

The next point of interest I visited was Kiyomizu-dera (清水寺) Buddhist temple which dates back to 798 and is a UNESCO World Heritage site. Kiyomizu means clear or pure water and the temple takes its name from the waterfall within the complex. Drinking the water is supposed to have various benefits and there was a long queue of people waiting for a taste.

The main hall has a large veranda, supported by tall pillars, that juts out over the hillside and offers impressive views of the city as well as some interesting history…

“The popular expression “to jump off the stage at Kiyomizu” is the Japanese equivalent of the English expression “to take the plunge”. This refers to an Edo period tradition that held that, if one were to survive a 13m jump from the stage, one’s wish would be granted. Two hundred thirty-four jumps were recorded in the Edo period and, of those, 85.4% survived. The practice is now prohibited.”

On my way out I spotted this old fella with an awesome hat standing perfectly still – I wasn’t sure whether he was soliciting donations for the temple or a beggar but given his outfit, I suspect the former.

It had been drizzling up until this point but as I walked back down the hill through the Higashiyama district it began raining in earnest. I was beginning to worry that the next few days would be a washout but luckily when you’re travelling alone the only person to get in a bad mood with is yourself!

I took shelter in the entrance to another temple to wait for the rain to stop but it stubbornly refused to do so. In the end, I made a dash for the nearest metro station and went to find the hostel I would be staying at for the night. More from Kyoto soon.