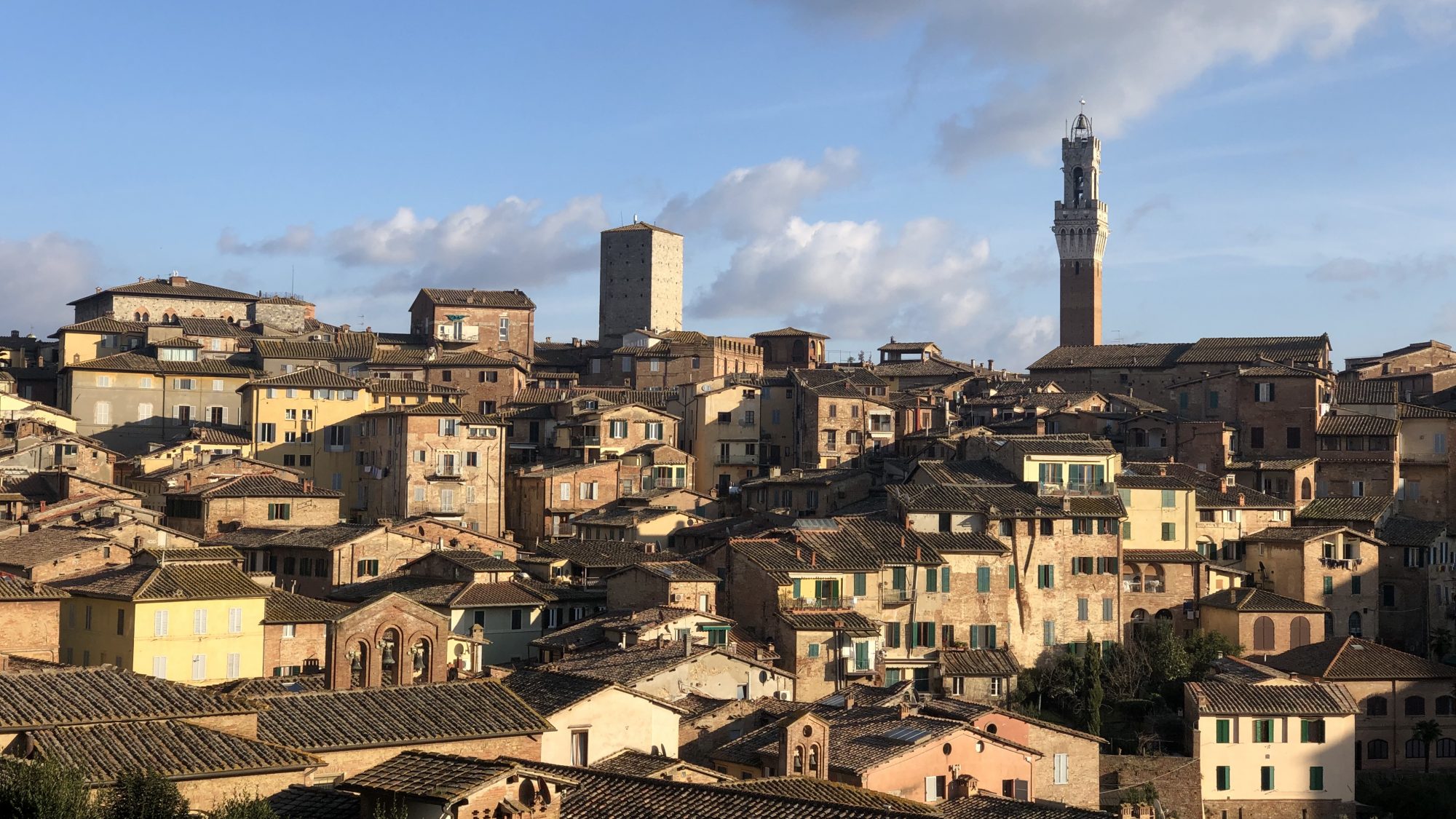 In my final post from pre-COVID Tuscany, we visit the city of Siena for a carefree wander through its medieval streets. Whilst obviously a tourist hotspot, it was easy enough to escape the crowds in the maze of backstreet alleyways.

Siena lies an hour south of Florence by bus. The city was important as a commercial and banking city until surpassed by Florence in the 13th–14th century. The Sienese embellished their city with beautiful churches, palaces, towers, and fountains.

Siena’s original character remains unspoiled, and Siena remains essentially a medieval town. This was thanks to the fact that most modern construction happened outside the city walls after the 16th century. The walls and gates enclose a city centre that is composed of narrow, winding streets and old buildings and palaces.

Throughout the city, you’ll spot steel hoops anchored into the stone walls used for parking horses in the Middle Ages. The different animal figures which adorn them give each a unique character.

Viewed from a distance, the many layers of Siena are something to behold. I overheard a tour guide telling people that the buildings all support each other so must be carefully maintained.

The centre of the city is dominated by a large, shell-shaped square called the Piazza del Campo. Twice a year, the famous Palio di Siena horse races take place here amid colourful festivities (you might recall it from a scene in Quantum of Solace). It is widely acknowledged that the outcome is determined by bribery.

Strangely, the Institute of Santa Teresa lies empty and slowly crumbling. I’m curious why nothing has been done with the beautiful building.

Siena’s cathedral was begun in the 12th century in the Romanesque style but was transformed in the 13th century into one of the finest examples of Italian Gothic. The walls and columns of the church’s interior are covered with black and white marble.

Below the Basilica of San Domenico, the Fontebranda was built in the 13th century by the Guild of the Wool-makers (Arte della Lana). The fountain front has three Gothic arches and a crenellated roof. The roof spans a tank fed by water travelling for kilometres to reach the city via aqueducts.

The fountain was used to provide drinking water for men, for animals, and to wash clothes.

A day felt about the right amount of time for a first look at Siena. There’s a fantastic density of history to explore and I’d like to return again to visit some of the museums and galleries.