It’s been a year now since the controversial Passion of the Christ hit our screens – love it or hate it there’s no denying its impact worldwide. While Mel cashes in again, this time with a watered down cut version of the film (about 5 minutes less torture), others in various places take it one step further and actually get themselves pseudo-crucified. Is this true dedication or just sick stupidity? I don’t know but it certainly makes you think!

Take a look at the Lenten Rituals in Cutud, Pampanga here [Graphic Content].

Thought I might pass comment on a fad which has emerged over the past week that just about everybody seems to be trying – ‘transparent’ screen backgrounds. Basically you take a photo of the scene behind your screen and set it as your background wallpaper, giving the illusion of a see-through screen. Some look pretty cool: 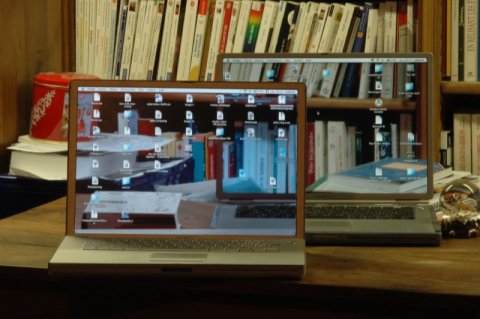 Tricky to get it the perspective right probably but with a tripod it can’t be too difficult. Not being one for fads myself (!) I haven’t tried to make my own yet but it’s ever-so tempting! Take a look at some more on Flickr.

All that’s left to say is Happy Easter, don’t overdo the chocolate!