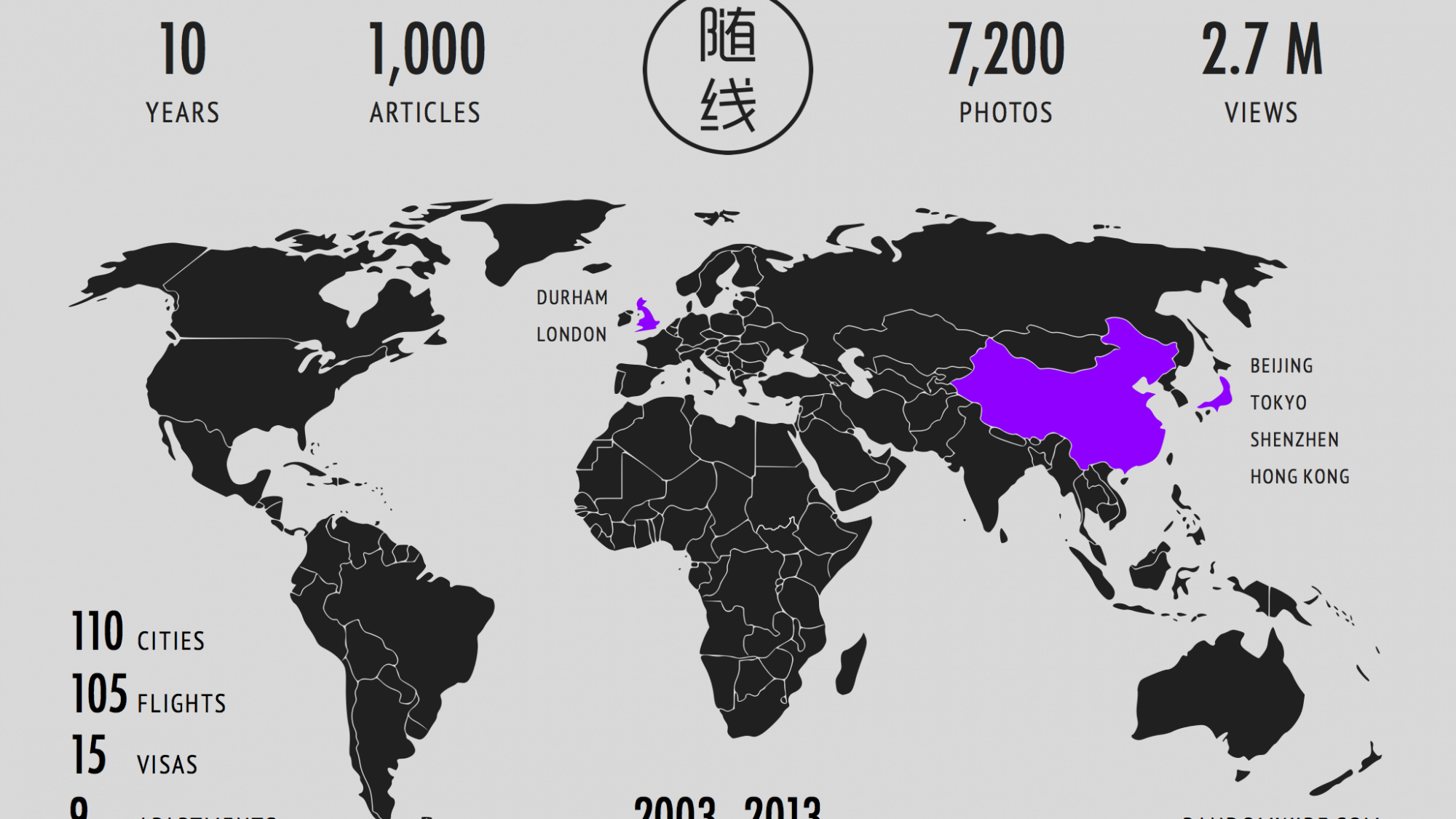 It’s hard to believe that it’s been exactly 10 years since I made my first post to Randomwire while I was still at university in 2003. Back then the word ‘blog’ had only just been minted and WordPress was still in its infancy (also recently celebrating its 10th anniversary).

If you’re wondering how Randomwire looked back in 2003 see this visual history.

Little did I know then that it would take me around the world to places I had never heard of and bring with it a life I had never imagined. One thousand posts later, a little wiser (and a lot balder), I find myself writing this in the heart of Tokyo, trying to make sense of how this all happened and wondering where it’s leading.

I got my first job straight out of university in 2005 and was flung head first into the stressful world of a large IT consultancy. In the third year of my time there I heard there was a project in Beijing which might have an open position and, wanting the chance to see what all the growing media attention on China was about, immediately put myself forward. After a couple of false starts, I found myself on a plane to Beijing a week later in early 2007.

Looking back I have to admit that I did hardly any work during the 3 months I was there such was the excitement of being surrounded by all the new sights, sounds, smells and tastes. After arriving back in London everything felt decidedly dull and I became determined to find a way back. I scoured the internet for companies in China which might be in need of my skill set and eventually found an IT outsourcing firm in Shenzhen that hired me as a project manager. The rest, as they say, is history.

I suppose it isn’t hard to see why a slightly introverted and naive 20-year-old guy would be attracted to the neon lights of East Asia’s megacities but over the last ten years, my interests in the region have undoubtedly matured beyond my initial fascination with its mysticism. Today nearly all my free time is spent exploring the region’s rich history, art, architecture and language (not to mention the great food!).

While I never set out with a specific goal in mind, I now see what I’ve been doing as a form of slow travel which I hope has allowed me to more deeply engage with the places and communities where I’ve lived. More than anything else I’m glad that I didn’t spend my 20’s stuck in a sterile office following the 9-5, and although there is no doubt in my mind that the lifestyle I have made for myself has its pros and cons, as long as the positives outweigh the negatives I will continue.

Then of course are the untold stories which never made it to Randomwire for whatever reason, like the time I nearly froze to death in Xi’an, being taken to watch Russian military opera by a mysterious stranger and the misery of spending Chinese New Year alone in an empty city. Most of these are personal and occasionally things I’d rather forget but perhaps one of these days would make an interesting doorstop.

Not many blogs make it past their first anniversary and although short-form social platforms such as Twitter and Facebook have become immensely popular over the last few years, I feel that a blog has a greater sense of permanence and gravity than its younger siblings. While a short post to one of these social networks has a half-life of minutes, content on a blog provides value for far longer and I enjoy being able to look back over my memories at will. I also like that I’m in complete control of my content and its presentation – platforms come and go but what I have will always belong to me and not be bound by others’ terms.

Let the kids have their 140 characters – I’m sure those with more to say will still find their way to blogging.

Aside from my sheer bloody-mindedness, much of my motivation has come from people commenting and emailing so I have a huge thank you to say to you all. Without these small nuggets of encouragement, I doubt I would have kept it up so long. If you haven’t yet introduced yourself please do!